How to Play Omaha/8 (High-Low)

The high-low split pot version of Omaha is a fun and exciting game, which we will refer to as Omaha/8. It is typically played as a fixed-limit game, but the pot-limit variety (known by the abbreviation PLO/8) is also popular, particularly online. The format, betting structure, and requirement to use two cards from your initial four hole cards, in conjunction with three cards from the board, is all the same as Omaha high but coupled with the addition of the best high and best low hands splitting the pot.

In our lesson on how to play Omaha we outlined that one major difference between Omaha and hold’em was the number of potential hands vying for the pot. In Omaha/8 that number remains constant as each hand still has six possibilities but now some of them are vying for the low end and others for the high. What this translates to is an action packed game with numerous bets and raises and large pots.

Omaha/8 is a split pot game, which means that unless someone scoops the pot it will be split. There are two ways to scoop the entire pot. The first is to have both the best high and low hands. The other way is to possess the best high hand when no hand qualifies for the low.

The high hand in Omaha/8 is the identical to a winning hand in Omaha high. If there is no qualified low hand then the best high hand will win the pot.

The rules for a qualifying low hand are as follows:

Low hands in Omaha/8 are ranked ‘top down’, from the highest card in the hand. For example

The best possible low hand in Omaha/8 is A-2-3-4-5, known as a ‘wheel’. Remember that low hands that are straights and flushes do not disqualify it from being low but, in fact, make it a two way hand and a candidate to scoop. While a Royal flush and a five high straight, called a wheel, would represent the best high and best low hands, the hand you really want at the showdown is a five high straight flush to scoop the pot with the best high and low hands.

The basic rules are the same as Omaha high, in that you must use two of your hole cards with three on the board.

In the above example a low hand is not possible because the board doesn’t contain three cards that are eight or lower. Only the best high hand will win. The nuts for this board would be someone holding Jack-Queen for the straight. With

on the board to make a high-hand of one pair.

Here is a hand that would qualify for both the high and the low:

In the above example the board contains three card no higher than an eight; the

. The hole cards in this example are very strong. In Omaha/8 you can use any two of your cards for the low and any two for the high-hand. The

can be used for the nut high hand (flush) and

The split pot rule makes it a very different game to Omaha-high. But it’s important to stress that Omaha/8 is not a game of splits. Whilst the best high hand will win half the pot and the best low hand will win the other half; scooping the entire pot is the true object of this poker game.

This game seems to have polarized poker fans in so far as they either love it or have a disdain for it. I like to call those who love it Omaholics and you should be careful, for if you are just getting started in this addictive form of poker, you may well join their ranks. 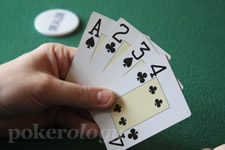 Omaha/8 is not a game of splits. Scooping the entire pot is the true object of this poker game.