This poker lesson is not going to suggest you take a notepad to your local card room and jot down all of the action you witness. Taking a spiral notebook to the brick and mortar felts isn’t very practical and you’ll probably get laughed out of card room. However, the online version of our fair game is ideal for taking notes on players and the tendencies they exhibit at the table.

The ability to create notes on the players you encounter is an inbuilt feature on practically every online poker site, yet one could wager that the vast majority of online poker players today do not take advantage of it. Most poker players either rely on a good memory or don’t even change their play based on their opponents. In poker, one of the largest sources of our profits comes from taking advantage of other’s mistakes. By taking good notes you’ll be able to track opponents who have made mistakes in the past and you might even be fortunate enough to see when your opponents make those same mistakes again.

Tracking how your opponents play in certain situations is undeniably profitable in the long run. There are also additional benefits of getting into the habit of taking notes. Preventing boredom is a key reason. Proper note taking will keep you focused on the flow of the game. You may even feel more confident since the added information you gain on your opponents will result in better decisions. The activity of note taking may also reduce the chances of you going on tilt, since you’ll be more concerned with the quality of your decisions.

Now that you know that taking notes is important, how should you go about it? Here are some of the things that you should try to keep in mind when taking notes.

Taking notes about the blinds levels is obviously not applicable to cash games, but it’s very important in tournament play. A player can change his play depending on how early the game is (blind level), how many chips he has (stack size) and what seat he is in (position). An example of a note might look like this; “25/50 (1500) CO” or “UTG 30BB 50-100”, whatever order or syntax works best for you.

Devil in the Details

Avoid being general with your note taking. Writing “raised with queens” isn’t very helpful. Along with the information suggested above, you should also record the sizes of a player’s bet. You will often find a pattern that can reveal the strength of your opponent’s hand just by the way he sizes his bets with certain hands and situations. A note might look like “75/150 (3200) UTG 3x = QQ”, which would mean that this player raised three times the big blind sitting under-the-gun with pocket queens. If later you get a note like “75/150 (3300) UTG 2x = KTs”, meaning he raised only two times the big blind with king-ten suited in a similar situation, you might be able to take advantage of this information at a later time with an appropriate move.

Many online sites have some sort of color or icon system that can allow you to easily mark a player. Take advantage of this feature if it’s available because it will give you a quick indication of how someone plays based or prior observations. When using colors it can be helpful to go with the “stoplight” system, using green on weak players, yellow on more accomplished ones and red to mark the serious grinders and solid poker players. You can use other colors or icons to notate other types of players as you see fit – whatever works best for you.

If you play a lot, eventually you’ll have a sea of notes to go through on many of the regulars you encounter. After a while you can slim down your information. If you have plenty of notes on how a player sizes his bets, just make a short note to that fact. A simple note like “Pre-flop: 3x is strong, 2x is weak” can eliminate a bunch of clutter in your note box for that player.

Keep up with the Game

Never miss what is actually going on in the game, especially when it is your turn. If you spot something noteworthy but are facing a situation that requires your full attention, play the hand. The note taking can wait. Make use of the hand history feature provided by the poker room and go back and review any past hands that you might have missed. Using shorthand while taking notes can be very helpful and later in this lesson will provide some examples you can use.

Just jotting down “FISH” or “%@&*!^# suck out artist that can’t fold!” isn’t going to help you very much when you see that player again. As much as that bad beat might have hurt be sure to get any information you can out of the hand and move on. That one note might help you avoid a similar fate in the future.

Note taking is for any situation. Pay close attention to how someone plays their draws, their nut hands and their top pairs. Did they trap? Did they check-raise? Did they make a value bet that was smaller than usual? Also be sure to watch out for any hands that have a showdown, even if you were not involved in the hand. Showdowns provide vital information and you’ll often be able to pick up a clue or two on how your opponents play. Take advantage!

When taking notes it’s best to try and use simple abbreviations. A quick two- or three-letter acronym is quick and easy to translate. Let’s start by looking at abbreviations for position:

Note: If the table isn’t full then be careful when using UTG. While it is important to know when the player was first to act, noting his relative position in regards to a short-handed table is key as well, especially for SNG players. You might use “UTG 3o” or “UTG 6H” to tell you that this was at a six-handed table.

Please be aware that many of the pre-flop abbreviations that follow are tailored to SNG and tournaments rather than cash games.

Here are some abbreviations that you can use in your notes for many post-flop situations, in both cash games and tournament play.

Other Abbreviations for Your Notes

The following abbreviations are probably obvious to you already, but we’ll include them just in case they’re not.

Suppose you’re playing in a tournament and you saw a player limp in with pocket fours from the button. He had 2,400 chips and the blinds were 30/60:

Here are two notes you could make about to describe this play:

Let’s suppose you saw a player raises four times the big blind at 50/100 from the hijack seat with a 1600-chip stack. The showdown revealed he did this with Queen-Jack suited:

Either of the following notes could be made to describe this play:

Let’s look at one more situation. In this example the small blind started a hand with 2,250 and shoved all-in pre-flop with Ace-King offsuit when the blinds were at 75/150, with an ante of 10 chips:

The following two notes could be made to describe this play:

Having as much information on as many of your opponents as possible will definitely benefit you as an online poker player. While you might not want to take a spiral notebook to the casino with you, there is no reason why you shouldn’t take advantage of the note taking features included in the software by the online poker rooms. Knowledge is power, so make sure you are the one that possesses this power and start taking notes today! 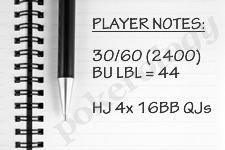