Back in the day when new poker players were trying to grasp the intricacies of the game, ‘marginal hands’ was a bad phrase. They were to be avoided at all costs. The very first rule players learned about poker was to not play too many hands. The number two critical rule was to study poker starting hand charts to gain an understanding of how hand values worked based upon position. Coupling these two rules produced the mantra of the day – Play only quality holdings and play them aggressively. While rather simplistic, it was (and still is) good advice to keep new poker players out of trouble.

However, mixing it up so that opponents don’t become too familiar with your playing style is a fairly rudimentary part of playing poker. To become predictable is not the poker strategy of winning players. In poker you have to play different hands the same way. If you fail to do so, opponents will glom onto your hands simply by virtue of how much you bet or raise with your holdings. Therefore you have to play some non-premium hands the same way you play your best hands, simply to give those good hands some cover and disguise.

Marginal poker hands come in all sizes and shapes but are mostly good drawing hands such as connectors, suited cards, smaller pairs, and even two gapped cards like J9, T8, 53, etc. These are the hands that don’t figure to win without improvement but with improvement they have lots of potential. This is because no-limit hold’em is a game of implied odds and a marginal hand can become a monster – and can take all of an opponent’s chips in one fell swoop, if played correctly.

There is a big difference between playing marginal hands and playing junk hands. Generally speaking, marginal hands have the potential to become strong hands while with junk hands you need your opponent to abandon their holding to take down the pot uncontested. Most junk is normally played out of the big blind for free. If you find yourself playing junk from other positions then you’ve probably wandered too far.

The Management of Deception

Playing solid hand values from appropriate position is still the cornerstone of winning hold’em play. The key part of that dictum is appropriate position. In order for you to maximize your winnings on good holdings you need to give the table the illusion of action. As the old western sage said, “Ya gotta give action to get action”. In no-limit hold’em we amend that slightly and say; “Ya gotta appear to give action to get action”.

Much of poker is the management of deception. Playing marginal hands cheaply from late position and when appropriate from earlier position, gives you the inexpensive illusion you desire – while giving you the potential to connecting to a big hand and make a lot of money.

If you show down a marginal starting hand once in a while, it will do wonders for your ability to gain action on your top quality hands. Notice I said “once in a while”, because if you do it too often it won’t serve you well. If you start playing too many marginal hands it will deplete your poker bankroll instead of enhancing it.

If all you play are good cards then you’re really just playing ABC poker and hoping you’ll get more good hands than your opponents. You know that isn’t going to happen in the long run so at best, unless you resign yourself to playing break even poker, you need to be thinking about how to outplay your opponents so you can win pots without good cards. How would one do that? One way would be to seek out profitable situations to play marginal holdings. The two critical elements to consider are your opponents’ playing styles and your position.

There is another element that I believe deserves a note of caution. Winning pots by your wiles alone can become quite intoxicating – so much so that many on that slippery slope succumb to the urge of overusing this tactic of playing poker without solid hand values. I don’t need to tell you what happens when everyone around the table realizes how you have been winning so many pots. Pick your spots combining adversary knowledge and position and you’ll do just fine.

There is a caveat to the above advice, and that’s if you regularly play against losing players that seldom pay attention to your playing style. In such cases you have no need to mix-up your play in an attempt to confuse them. After all, they are not thinking about what hands you might be playing – so you’d be far better off by sticking to “ABC poker” and exploiting their weaknesses rather than deviating into the realms of fancy play syndrome. Remember that most of the money you’ll win at poker comes not from the brilliance of your own play, but by the ineptitude of your opponents.

From Marginal to Junk

Don’t fall in love with your starting hands. Starting hands change their value as they progress. Let’s examine a poker hand that would qualify as marginal and worth playing but may lose some of its luster as the hand progresses.

in middle position. Two players limp and the next player min raises. Since it was only a min raise and you’re feeling frisky, you call as do the first two limpers. Now the flop nails your holding making you a straight with

. Your flush draw just became history but a made straight on the flop is nothing to sneeze at. Now the first limper bets out half the pot, the second limper calls and the original raiser re-raises:

Wow – what just happened and what should you do now? This is the moment that you come to grips with the fact that you’re holding the proverbial idiot end of a straight, also known as the sucker straight, and could be in real trouble. Your suited connectors were a good, marginal hand that just turned into junk. Try not to go to war with the bottom end of a straight. Many a stack has been sacrificed in that manner.

Marginal poker hands that are easily dominated will be your biggest long-term money losers, if you lack the discipline to get away from them. If you decide to enter the fray with a suited Ace-rag then remember the reasons for playing the hand in the first place. Your objective with such a hand should be to try and see a cheap flop in hopes of making a flush. Don’t get too frisky if an Ace falls on the flop – someone could easily have a better Ace.

A hand like Ace-Jack is also marginal, in that it can be easily dominated. The same holds true for hands like K-Q, K-J, K-T, etc. When viewing an early raise while holding a marginal hand, I have found the old poker axiom of “When in doubt, get out” to be very wise advice. That wisdom can save you a whole bunch of chips. Instead of viewing these marginal hands as playable, think about how much you enjoy others playing those hands against your Ace-King.

You might flop something spectacular with a marginal hand, but the sad truth is that the best hand going in is usually the best hand coming out. So when you start second best, it’s all too easy to seduce yourself into sticking around with something that’s second best and figures to stay that way. Avoiding domination is one of the best bankroll preservers in my view. Try and be the Dominator not the Dominatee – it’s a great deal more profitable.

The main keys to successfully playing marginal hands are pretty much the same keys for all elements of winning poker play. They include knowledge of your opponents’ tendencies, position, an awareness of the image you have been projecting, and the possession of a certain degree of discipline. Possessing discipline is critical to bankroll preservation so when you just catch a little piece of the flop you don’t wind up married to the hand which many times will lead to getting divorced from your chips. There are no prenuptial agreements in poker. 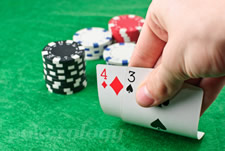 In order for you to maximize your winnings on good holdings you need to give the table the illusion of action.