Even first-time players knows that poker is a game of odds, and while newbies might not be able to figure them, at least they realize that there’s a relationship between the chances of making a winning hand and how much money is in the pot. But they probably don’t know much about the concept of implied odds (and reverse implied odds) – which sounds complex and foreboding but is really nothing more than the opposite side of a slightly more sophisticated way of thinking about risk and reward at the poker table.

Estimating What You Think You’ll Win

Implied odds offer a comparison of what you think you’ll win – including all the money in the pot right now along with any additional money that figures to come into the pot through bets and calls on future wagering rounds – compared to the cost of a current bet. If this sounds somewhat less than a precise measure, you’re right. Unlike mathematical odds, implied odds involves estimating – or guessing – about the future action of your opponents. When you base a bet or a call on implied odds, you’re wagering not only on the odds related to making your hand, but also on your ability to forecast your opponents’ behavior when your hand comes in.

Let’s look at some examples to clarify this. Suppose you flopped a flush draw, and with two cards to come, the odds against completing it are 1.86-to-1 against you. But without knowing how much money you figure to win if you have to call a bet to draw to your flush, you can’t tell whether it pays to stick around or not. After all, with the odds at nearly 2-to-1 against you, if the all the pot offered was even money – you’d win as much as you contributed – it wouldn’t pay to keep drawing.

In poker, whenever the pot odds exceed the odds against making your hand, it pays to keep playing. When the odds against your hand coming in exceed the reward associated with it, it’s usually a bad deal. A simple way to think about this is that whenever the prize exceeds the cost of the game, keep playing. When the cost to play is more than the money you figure to win, you should fold.

But implied odds can change that equation, and here’s why. While the current size of the pot might not be sufficient to make it worthwhile to take another card or two, if you reckon that the pot will grow substantially on future wagering rounds, your decision might be a different one.

If you’re going to use implied odds as justification to call an opponent, then be aware that some draws have greater implied odds than others. Flush draws are pretty obvious, and most opponents will at least stop and ponder when an opponent who has been calling all along comes out betting when a third suited card hits the board. In other words, unless your opponent is very loose or figures you for a bluff, implied odds with flush draws tend to be smallish, because that third suited card can put a serious damper on any forthcoming action.

Things are different when your hand is hidden. Because hidden hands are more deceptive, your opponent might not realize the strength of it and pay you off with a second-best hand. The best implied odds draw is a double belly buster straight because of its stealth nature.

An example of this type of hand would be a flop of AJ8 while holding QT. While the board looks somewhat disjointed you have eight outs (four Kings and four nines) to hit your straight.

The odds of hitting your straight on the turn are just over 4-to-1 against. The pot odds in this example are just over 3-to-1, so you are not getting the right price to call based only on pot odds. However, the implied odds are favourable with such a hidden hand. An additional upside to a hand like this is that an opponent may have a hand like AK and if a King hits the board he will give you plenty of action and many times never see your stealth nut straight coming.

Pot-limit and no-limit games offer larger implied odds than fixed-limit games because of the potential for bigger wagers on subsequent betting rounds. But structure alone is meaningless without an understanding the playing style of your opponents. Passive opponents – the kind of players who call but rarely raise – increase your implied odds because you can draw inexpensively against them and count on getting paid off handsomely whenever you make your hand.

Players have to guard against self-deception when figuring implied odds. Because there’s a certain amount of subjectivity associated with them, some players get into trouble when they use implied odds to justify weak calls. Here’s what we mean.

Suppose you have a flush draw on the turn and with $20 in the pot your opponent bets $10 (as shown in figure 2). Your immediate odds are 3-to-1 plus whatever implied odds you assign to the final betting round on the river.

But unless your adversary is completely transparent or you have a terrific read on him, it’s all too easy to be overly optimistic – and therefore self-deceptive – about how much more money your opponent will be willing to invest in the pot if you make your hand. You might complete your hand on the river and try for a check raise only to have your opponent check behind you. You’ll probably win the showdown, but you would have won more if you wagered an amount your opponent would call.

So the check raise failed. Next time you’re in this situation suppose you bet a large amount instead of trying for a check raise. You’re hoping your opponent thinks you’re bluffing and will call. But instead, he ponders for a moment and then releases his hand. Would a smaller bet – presumably one sized to easily attract a call – have worked better? Or would this have been the time to try for a check raise? You just can’t be certain, and this is the part of poker that’s an art, not a science.

Predicting What Your Opponent Will Do

Let’s back this up a bit. Before you decide to play your draw on those earlier betting rounds, you need to have some idea about what your opponent will do when you complete your hand.

If your opponent is willing to call big bets on the river, you can take a short price on the turn because you know that when you make your hand, the payoff will more than exceed all those times you drew, failed to get there, and either folded or bluffed the river only to have your opponent call and win the pot. But if your opponent is the kind who hunkers down whenever a scare card hits the board, a better play might be to eschew the draw, and bet for value against him whenever you have what you believe to be a better hand.

Warning: The Fast Path to Self-Deception

For some players, the idea of implied odds is a fast path to self-deception at the poker table. You’ll see players calling bets with far the worst of it and if you asked them why, they’ll tell you that implied odds made it a worthwhile bet. While implied odds are a bit of a guess, those guesses need to be fairly accurate to pay off in the long run. Otherwise it’s just self deception – a way of talking oneself into playing hands that really should be folded.

Players who do this are savvy enough to know they shouldn’t play hunches at the poker table, but they still lack the requisite self-discipline to ensure they’ll beat the game. In order to sound like they are smarter than hunch players and any-two-cards-can-win maniacs, they’ll cloak their desire for action – even when the price is clearly wrong – in the mantle of implied odds. 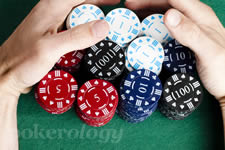 While implied odds are a bit of a guess, those guesses need to be fairly accurate to pay off in the long run.