There are many entertaining, wild and unique variations of poker that can be played, beyond whatexist and continue to flourish. It’s highly unlikely these hybrid games will be found in a casino or cardroom near you – but they might be played in home games and other private settings.

It’s assumed that you are very familiar with the general rules and nuances of the standard poker games. Almost all the hybrid games follow one standard form of poker albeit loosely, as we shall see.

Another caveat before we jump in the pool is that the rules which govern many of these games vary by location. Therefore, if you recognize a game which your home group plays but believe I’m incorrectly explaining it, realize that I’m just explaining a slightly different form of that game.

This hybrid goes by many names and Double Reno is just my group’s moniker. Other names, which are actually more descriptive, would include; Double Flop Omaha, Two Time Omaha and Omaha Squared. Essentially it is played just like Omaha but there are two flops, two turns and two rivers. I’ve always played it high-low eight or better.

An additional feature is with a “Twist” card after the river which can be used in either row. In this version, one would have two rows of six cards with which to work their four card starting hand. There are always a lot of combinations, especially with both high and low hands vying for their piece of the pie. Suffice it to say that unless you hold a nut hand you should be sitting on the sidelines.

High Spade in the Hole

This game’s structure is seven card stud and is a split pot game wherein the highest hand and the hand that holds the highest spade in the hole will split the pot. Obviously, there is a high premium to being dealt the Ace of spades in your first two down cards. If you are fortunate enough to receive the Ace of spades, you are guaranteed at least half the pot… now all you need do is make the high hand and you would scoop the entire pot.

This game is a form of hold’em where each player is initially dealt three cards. One might think that being dealt trips would be the best starting hand but alas, after the flop one of your three cards needs to be discarded. That one extra card adds an enormous amount of flexibility once the flop is viewed. Imagine being dealt a pair of Aces with a suited deuce. The deuce would appear to be your discard right up until the flop makes you an Ace high flush sending your offsuit Ace into the muck.

Another form of this game, Regular Pineapple, calls for the discarding of a card before the flop instead of after. This can cause some real angst once players then see the flop and realize a different discard would have served them better.

This game can be played high, low or high-low with or without a qualifier for the low hand. As stated in the introduction, many of these unique games have gone through several mutations depending on locale. A player is dealt five closed cards as in draw poker. Past receiving five cards, the resemblance to draw poker ceases. There are five board cards dealt out face down in the form of a cross. Three horizontal cards and three vertical cards with the center card tying the two rows together. The cards are turned over one at a time alternating between a horizontal card and a vertical card. The center card which “goes both ways” is turned over last and in some forms of this game is wild, meaning any player holding one of that rank in his hand has two wild cards. There are normally six rounds of betting, one before any cards are revealed and then another round after each card is turned over.

This game is essentially the same as Criss Cross but the board cards are dealt in a straight line. You are dealt five closed cards and there are five board cards turned over one at a time with a round of betting after each board card is exposed. As in Criss Cross, Cincinnati can be played as split pot or one winner.

Spit in the Ocean

This game is played like draw poker but each player only receives four cards and there is one card dealt face up in the center of the table which becomes everyone’s fifth card. Some games make this center card and all like it wild. If played with a joker, which is also wild, there would be five wild cards lurking. Certainly enough to create some powerhouse holdings.

Another version of seven card stud where if a queen appears in someone’s hand, the next card dealt to the next player is wild and all like it. The twist in this game is that the wild card can change. As the next set of up cards are dealt, if another Queen appears, unless the next card is the same as the last a new wild card comes into play. The first wild card is stripped of its wild card status.

An extreme example of this dynamic would be your neighbor to the right having a Queen as a door card and you having rolled up deuces. Now you would have three wild cards right from the start… awesome! On fourth street if you catch a Queen and the next card is a seven, then your three wild cards became just plain old deuces as now sevens are wild – at least temporarily.

Jacks to Open, Trips to Win

This is a form of draw poker designed to create large pots. It starts off as standard draw poker with each player being dealt five cards and the requirement to have at least a pair of Jacks to open the pot. If no one can open then the cards are re-dealt but now one needs at least a pair of Queens to open. The opening requirement moves to Kings and then Aces. If after the Aces to open requirement is past, it reverts back to Jacks and once again climbs up with each deal until ultimately someone wins. If someone can open the hand, it is played with a draw of up to three cards but ultimately you need at least trips to win. If after an opening no one has at least trips the cards are re-dealt again. The pot continues to grow with an additional ante for each deal plus any betting that occurred as the pot was opened but not completed with trips or better.

One more twist makes this game a home favorite. If during a round that does not end the game with a winner, any player who folds to a bet is then out for any subsequent rounds. This twist encourages an opener who may not have improved to the requisite trips or better to try and thin the field by betting, thereby enhancing his odds of winning in the next round. This game is either loved or hated as the upside is a large pot and the downside is its time consumption.

The above list is certainly not meant to be all inclusive as with all the mutations that abound, it would be impossible to capture them all. I’ve tried to overview ones that use different forms of the standard games as their basic format. The reader can introduce any of these games at his home game if not already played or add a new twist or two and make one of them a further hybrid.

Regardless of the form of poker that these unique games take on, the one commonality that binds them together is the fact that the hand values required to win are much higher than their tamer standard cousins. A major mistake made by newcomers is overvaluing two pair and trips. When you start playing games with wild cards and double the number of normal cards to make a poker hand, that hand better at least be a high full house if you intend to drag in a pot. Use your imagination and invent a new game – then if it catches on in your home game, let us know about it. 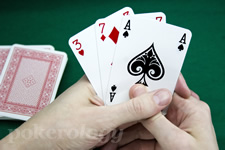 The hand values required to win are much higher than their tamer standard cousins.