How to Play Kings

Pocket kings are the second best hand to be dealt, right after pocket aces. As was the case with pocket Aces, some players bemoan receiving them since they are vulnerable to a single Ace in someone’s hand coupled with a single Ace on the board. One should not be focused to the vulnerability of pocket Kings, but rather appreciate the fact that they are the second best starting hand one can be dealt. With this starting hand the glass is definitely even more than half full versus those pessimists who immediately fear the worst.

While your fondest hope is to flop a set with your Kings, which happens about 12 percent of the time which is 7.5-to-1 against, they can win unimproved or they might even complete a high straight. You do need to act aggressively, as you did with your Aces, attempting to get the field of players down to a few and more importantly, get those Ace-rag hands that always seem to lurk about to fold. A good raise should achieve this aim, but you’re still likely to be up against hands such as AK, AQ, AJ, and if an Ace pops up on the flop you need to proceed with caution.

In the Face of an Ace

Caution does not mean immediately discarding your pocket Kings in the face of an Ace. If an Ace does come on the flop then you’ve got a big decision to make. A useful strategy is to make an exploratory bet and see how your opponent reacts. If they’re holding AQ or AJ, then such a bet may get them to incorrectly put you on AK due to your pre-flop raise – unlikely, but maybe!

If an Ace does fall on the flop and you’re against a tight opponent, then it’s highly likely you’re going to be an underdog:

It’s also likely that your opponent may have called your pre-flop aggression with a pocket pair like Jacks or Queens or may hold a suited KQ in which case you will have him severely dominated.

Of course that may be wishful thinking. However if we assign a range of Jacks or better with Ace-King, then it’s not all doom and gloom:

An Ace on the flop is certainly not what you want to see when you’re holding pocket Kings, but don’t immediately assume the worst. Consider for a moment what your opponent thinks you might be holding before shutting down and giving up in the face of an Ace.

The ‘Assess the Flop’ Strategy

Although you should be playing your pocket Kings aggressively pre-flop, a mistake that a lot of players make, particularly in the early stages of poker tournaments, is to push all-in when there’s no need to do so. If you do this then it’s likely that you’ll be up against either a strong pair lower than Kings (which is good news), or a hand containing an Ace, such as AK or AQ. If an Ace does fall on the flop, which they invariably do when holding Kings, then you have no opportunity to survive – and are out of the tournament.

You may think that this is just bad luck, but if it’s during the early stages of a poker tournament then a better strategy might be to isolate an opponent without going all-in, and then assess the flop. Of course if you are re-raised pre-flop then you should be calling for all your chips as you’re only behind to Aces – and although Kings can sometimes run into Aces – you can’t play afraid of Aces.

To the negative players that call pocket Kings ace magnets I say … aside from Aces what other starting hand would you prefer? Of course, the answer is pocket Kings.

Let’s not forget that pocket Kings are a great starting hand in hold’em and will win you a lot of chips over the long term. One of the ideal scenarios when playing Kings is when you’re opponent hits a Queen or Jack on the flop, with a strong kicker. This is when you can win big pots. Of course you also have to look out for the possibility that your opponent has hit a set, or some holding that can take a big chunk of your chips.

Just like when you play any other premium starting hand, you need to factor in your knowledge of your opponents, position, the texture of the board and what you had for breakfast before making a wild guess as to how to proceed. Of the aforementioned factors your breakfast is the least important. 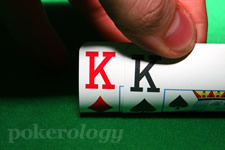 Aside from Aces what other starting hand would you prefer? Of course, the answer is pocket Kings.