How to Play Ace-King

There is an old adage in the poker world that while stud is a game of live cards, hold’em is a game of high cards. There is a great deal of truth to that saying and it helps explain the love affair that exists between hold’em players and Ace-King – which is known throughout the poker world as “Big Slick” – and also what many call a suited AK; “Super Slick”.

Many poker players struggle to distinguish any difference between Ace-King and what David Sklansky refers to as “Group 1” hands such as AA, KK, QQ, JJ and AK suited. He relegates an unsuited AK to his “Group 2” list. While AK suited or not is clearly a nice starting hand it is overvalued by some. The good news is you can get a starting hand of AK a lot more ways than any of the other top starters as we’ll outline next.

There are sixteen ways for the four Aces and four Kings to get together and make Big Slick, which means you will see it more often than Aces or Kings combined.

Is Ace-King almost as good as Aces or Kings? The answer is a resounding no. Let’s check out the stats. As you can see, Ace-King offsuit (Big Slick) is a huge underdog to a pair of Aces:

Ace-King suited (Super Slick) is better, but it still gets crushed:

And here’s the combined stats, showing unsurprisingly that a pair of Aces are a massive favourite against Ace-King:

Ace-King does do better when matched up against a pair of Kings:

The fact that Ace-King is nowhere near as good as Aces or Kings shouldn’t come as a surprise, since both of the top pairs are made hands while in contrast, although big slick can win in a showdown unimproved, the majority of the time you will need improvement for it to prevail. It’s not all doom and gloom though.

The Beauty of Ace-King in Tournaments

Ace-King is a favourite tournament hand with which many players like to get all their chips into the middle, especially pre-flop. They feel that Aces and Kings are the only prohibitive favourites against it so it’s a hand with which it is worth gambling.

Even the lesser big pairs such as JJ and QQ are only slight favourites to AK:

The beauty of AK is that it dominates the typical hands that players tend to push all-in with late on in tournaments, namely AQ, AJ, etc.

Ace-King is Overvalued by Many Players

There is definitely a love affair out there for Ace-King. However, the strength of this hand is overvalued by many poker players – and they end up going broke. It’s fairly easy to play AK late in tournaments, where pre-flop aggression and all-in moves are commonplace. But the real difficulty with playing AK is in the early stages of a deep-stake no-limit tournament and in cash games. In such situations, it’s probably prudent to attempt to keep the pot small and treat your AK as a drawing hand and taking more of a wait and see strategy. Trapping others for bets makes for a big pot which ties opponents to it. The bigger the pot the harder it becomes for opponents to fold their holdings.

Advantages of Keeping the Pot Small

There are two main advantages to keeping the pot small in no-limit. First, you won’t be as tied to the hand when you flop a pair but it becomes obvious an opponent has flopped two pair or a set. Secondly, by playing more conservatively you will disguise your hand as most players tend to jam with AK. This second advantage will help you get action when you flop top pair and an opponent has a weaker kicker. Another player who may be holding AQ will become aggressive not believing you would not have raised holding AK pre-flop.

There is a whole legion of poker players out there that raise big with Big Slick from any position all the time and what they always do is what they think everyone else does. This behaviour can provide an opportunity to trap these conventional thinkers for extra bets.

…did you know that AK flops a flush draw 11% of the time?

The new book Optimizing Ace King has a complete chapter on playing draws (along with chapters on playing pairs, turn & river play, and even ideal lines when AK totally misses the board). 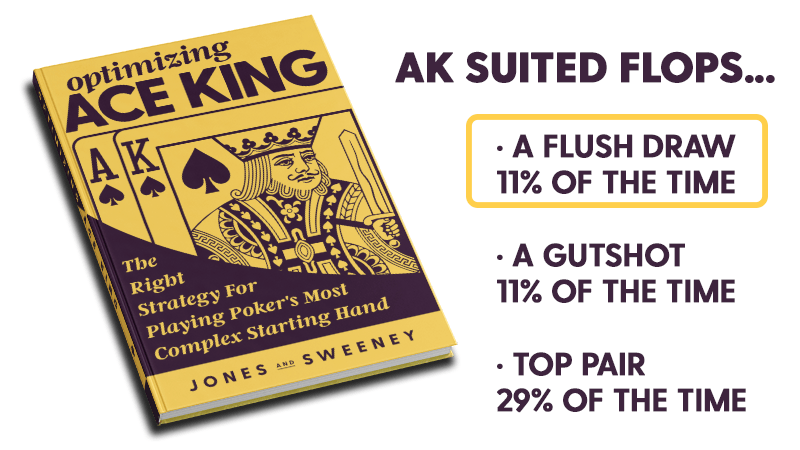 As a bonus for being a Pokerology reader, use code POKEROLOGY at checkout to save $5 when you pick up your copy.

You shouldn’t confuse this ‘wait and see’ strategy with slow playing Ace-King. You should certainly be raising to thin the field. It’s a vulnerable hand and it needs protecting, but this doesn’t mean you should go overboard.

It’s also very difficult to know where you stand with AK because even if you do hit an Ace or King on the flop, you might be thinking you have a good hand, but you can’t be too sure. This is why your position at the table has to be a key consideration when playing Big Slick. Having position on your opponents certainly make this hand easier to play, but still far from straightforward.

The next time you are see a flop and you’re holding AK, take a moment to acknowledge what other hands might be lurking around the table.

While AK represents a favorite starting hand for many it is best to put its value into proper perspective. The elements that need to be evaluated to recognize its value is your position, the number of opponents you face, the betting and of course, the playing tendencies of your foes. I believe one should generally acknowledge AK to be a drawing hand when facing four or more opponents and play it like a powerhouse when up against a short field or heads up. 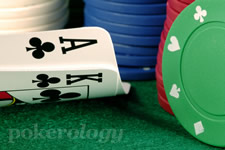 The real difficulty with playing Ace-King is during the early stages of a deep-stacked no-limit tournament or in a cash game.