In this lesson we’re going to run through a number of heads-up match-ups that will help give you an idea of where you stand in a variety of pre-flop situations when playing hold’em. Be aware that we’re only going to focus on individual hand match-ups. When playing hold’em it’s essential that you put your opponent on a range of hands, rather than specific holdings. However, knowing the odds of common pre-flop match-ups is a good starting point. Pick out and study what will help you. While it’s not essential that these statistics be committed to memory, it won’t hurt you if you do.

Let’s start by looking at hand match-ups when holding a pair:

The higher pair is an 80 percent favourite. We can get very technical and highlight the fact that if the underpair didn’t have any clean suits and/or the maximum number of straight outs then the high pair’s equity would increases by one or two percent.

This is the classic coin flip hand that you’ll see many times late in tournaments with one player being all-in. The term coin flip indicates an even money situation which is really a 55 to 45 percent situation, as the pair is a slight favourite.

In this situation the pair is normally about a 5-to-1 favourite and can vary depending on whether the two undercards are suited and/or connectors.

Pair vs. Overcard and an undercard

The pair is about a 70 percent favourite. Another example of this holding would be J-J against A-9. The underdog non-paired hand has three outs while the favourite has redraws.

Pair vs. Overcard and one of that pair

The classic example of this situation is the confrontation between a pair of cowboys and big slick. The A-K has three outs and it becomes a 70-30 percent situation or a 2.3-to-1 dog for the cowboys. This is a far cry from the next situation where even though one of the pair is matched the other card is lower.

Pair vs. Undercard and one of that pair

The non pair has to hit its undercard twice or make a straight or flush to prevail. The pair is better than a 90 percent favourite or slightly better than 10-to-1 odds. I’ll take those odds anytime.

You see this match-up late in tournaments when a player is getting desperate and pushes all-in with middle suited connectors. A hand such as Q-Q against 7-6 suited would be a prime example. The pair is a strong favourite to win.

Here is the real coin flip situation. A pair of eights heads-up against a suited Q-J is a fifty-fifty proposition. The higher suited cards would have an edge against a lower pair, such as 2’s or 3’s, since the board itself can sometimes destroy little pairs.

The two higher cards are usually a 65% favourite to win, but it can vary depending on whether any of the cards are suited and/or connectors.

In this match-up the high card gives it the edge. But it’s only a marginal winner, approximately 57% to the hand containing the high card.

The edge is increased by around 5% when the low card becomes the third highest card, as shown in this example, which gives approx 62% to 38% for high card/middle card combination.

In this example the A-J is in a very strong position. If we discount any flush or straight possibilities, it only leaves the player holding J-8 with three outs (the three remaining 8’s).

The high kicker gives this hand a fairly big edge. It’s very common for A-K run into A-Q, A-J, and lower, and it’s why Ace-King is such a powerful hand, particularly at the business end of no-limit hold’em tournaments when people move all-in with any sort of Ace.

For any math maniacs reading this who do not find these odds precise enough, I acknowledge that the math is rounded and for the most part does not take into account the possibilities of ties and back door straights and flushes. What players need to be equipped with is the general statistical match-up – not the fact that in the example of a pair of eights against a suited Q-J the percents are exactly 50.61 for the eights to 48.99 for the suited connectors with the balance going to potential ties. I call that a fifty-fifty proposition.

Of greater importance than quibbling over tenths of a percent is the fact that in most heads-up confrontations you can never be a prohibitive underdog. That is one reason why poker is so challenging and fun. Of course, while true, I’m not attempting to embolden the reader to ignore the odds and become a maniac. Math is the underpinning of poker and if you regularly get your money into the middle with the worst of it you will go broke.

One statistic that hasn’t been mentioned, and it’s one that I particularly like is this – the odds of both players being dealt Aces when playing heads up (one on one) is 270,724-to-1. It’s my favourite statistic because it provides me with almost total confidence when I’m playing heads up and receive pocket Aces that I’m the boss! That confident feeling lasts right up to the river when my Aces get cracked by some rotten piece of cheese which my opponent elected to play. As mentioned already, rarely are you a prohibitive underdog – so remember that to keep those losing hands in perspective. 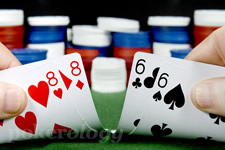 Rarely are you a prohibitive underdog - so remember that to keep those losing hands in perspective.