Have you ever put out a bet hoping that your opponent will fold? The percent of time that an opponent will fold to your bet is known as your “fold equity”. The concept of fold equity has always been with us, though its name is somewhat new. The concept comes from semi-bluffing, a bet made with a hand that’s probably not the best hand right now, but a hand that stands a good chance of outdrawing any opponents who call. When you add the idea of fold equity to whatever your chances are of improving to the best hand, it might raise a hand from one that would otherwise be a loser to one that’s worth playing.

Thinking in terms of fold equity allows a poker player to become creative with hands that would otherwise be folded if considered solely from the perspective of the hand’s chances of improving to the best hand on future betting rounds. That’s why you often see good poker players raise with otherwise suspect hands. They’ve done the math and realize that a bet from a hand that’s currently only a 40 percent shot to win, but has a 15 percent chance of inducing the opposing player to fold, now has a 55 percent chance of winning.

While the concept of fold equity applies to all forms of poker, it is much more prevalent in no-limit games where you can determine the size of your bet. It is also applied frequently in tournament poker as the variations in stack sizes can determine how much fold equity you have.

What Influences Your Fold Equity?

In order to determine how much fold equity you have, there are a few factors that you need to consider.

To keep it simple, the tighter your table image, the more fold equity you have because they will assume you have a good hand. If you have been raising a lot pre-flop or betting and raising flops recently, a bet now may not be believable and it will reduce your fold equity.

Is your opponent capable of folding after they’ve limped in? Do they give up their blinds? If so, a raise has more fold equity than if they are stubborn and like to see the flop. Are they capable of folding top pair, middle pair, a pocket pair? Do they fold to scare cards? If so, a bet against them has greater fold equity than against a calling station.

Many of the factors below go into making up your opponent’s hand range, but the main concept to be thinking about when in a hand is; “of all the hands in my opponent’s range, how many of them will fold if I bet or raise”.

In general, a raise from early position is going to garner more fold equity than a button raise because of the perceived strength of your hand range. A late position raise may be seen as simply stealing the blinds.

In tournament play, stack sizes are increasingly important as they become shallower in relation to the blinds. If either you or your opponent is below 40 big blinds, not only will your opponent have to think about your current bet, but they will have to worry about future bets where their entire stack can end up in the middle. They will have to determine if calling this bet is worth playing for all their chips.

Another perspective also applies to tournaments where a short-stacked opponent raises leaving themselves only a few big blinds behind. A re-raise here is not going to have much fold equity because your opponent is so short that they are desperate. Similarly, shoving all-in pre-flop into a medium sized stack that you can do damage to will have more fold equity than if you shove into a monster stack or a desperate short stack.

Put simply…. the more people in the hand, the less fold equity you have. The odds of someone calling or raising go up as you increase the number of players in the pot. This commonly applies to raising limpers pre-flop and continuation betting on the flop. You may be itching to bluff, but understand that your success rate will go down as the number of players increases.

The Board Texture and the Betting Line

Is it believable that you actually have the hand you’re representing or did you just randomly decide to bluff the river? If your bet tells an accurate story, it will have more fold equity and a higher success rate.

The Stage of the Tournament

If you’re a tournament player, your bet or raise will often have significantly more fold equity during the bubble stage…. be that the money bubble, final table bubble or any other major pay jump. Know your opponents and pick on those trying to creep into the money.

Betting bigger doesn’t necessarily mean you’ll get more folds. In fact, against some opponents you’ll get called more often with a larger bet since it looks like a bluff. You should aim to mathematically size your bets so that you have the most fold equity and also the highest long-term expected value. In many situations, the higher percentage you think your opponent will fold, the smaller you can make your bet.

Here are a few examples illustrating the concept of fold equity.

You’ve observed that this player is very loose and aggressive but seems able to make laydowns and your image is fairly tight. You conclude that this player’s raising range consists of about 25% of all hands including all pairs, all broadway cards, suited connectors, Ace-rag and a variety of suited face cards.

But what about his calling range? Since he is able to make laydowns, he will probably call your all-in bet with pocket pairs 99+, AJ, AQ, and AK. That is only 6.3% of hands. If he is raising 25% of hands and calling 6.3% of hands, this means he is only calling about 25% of the time and is thus folding 75% of the time. You can profitably go all-in with a wide range of hands and have a high degree of fold equity.

Now let’s change your opponent to tight and you to loose. His tight raising range includes pairs 77+, AT+, and KQ. This represents 9.4% of hands. Now since you are a loose aggressive player, let’s assume his calling range is 88+, AJs, AQ and AK, which is 5.9% of hands. This means he is only folding about 37% of the time and calling 63%. And of course, when you are called it will be with a good hand. In this situation, you are not going to have that much fold equity and need a good hand to go all-in with.

Now let’s go back to the original scenario of you being tight, but change your stack size to 1,600, as shown below:

In this case, even though your image is tight, you will not have much fold equity. After he raises to 500 and you go all in there will be 2,200 in the pot and it will be 1,100 for them to call, giving your opponent 2-1 odds where he can profitably call with almost any two cards. Additionally, your stack size doesn’t do much damage to his, whereas in the original example a 3,200 hit to his 5,000 stack is a major blow.

Similar to the above example, there will be many times in a tournament where it will fold to you and you have to make the decision to go all in or not. Before you factor in your cards, you should factor in the players left to act behind you and what your think their calling ranges are. This will help determine your fold equity.

Let’s say you are in the small blind vs. an opponent who you think will call you with 77+, A9+ and KQ. That’s about 11% of hands, which means they will fold 89% of the time! You may also be playing online and have the benefit of a HUD (Head’s Up Display) that gives stats on that player’s VPIP stats. If they are playing 15% of hands, for example they are at least folding 85% of the time and in fact many of the hands they may have played aren’t hands they are willing to call your all in with.

Let’s say the river brings a scare card that makes you decide that bluffing is a good play. Before you make the bet, use the factors listed above and make an educated guess of the percentage of time that your opponent will fold to this bet. For this example, pretend the river brings a flush and your are putting your opponent on a top pair type hand. Based on your read of the situation, you think your opponent will assume you are only bluffing about 15% of the time and will thus fold 85% of the time.

In order to make your bluff have positive expected value, you should size your bet so that the pot odds they are getting make it an unprofitable decision for them to call. If you bet ½ the pot, they will be getting 3-1 odds; which translates to them needing to think they are ahead 1 out of every 4 times (or 25%). Since your read was that they would only think you are bluffing 15% of the time, this bet size has fold equity and will make a profit in the long run.

The danger of fold equity, of course, is that many weak players use this notion simply as a way of talking themselves into playing hands that ought to be folded because their assessment of fold equity is horribly wrong. If, for example, you’re playing against an opponent who seldom folds and cannot be bluffed, just forget about fold equity. You have none. Instead, all you should do is value bet your good hands instead, because while you can’t bluff this kind of player you can and will get paid off every time you wager.

Understanding how much fold equity you have is a very important concept that is often overlooked by poker players of all skill levels. Many poker players can become robotic in their actions and just keep betting hoping their opponent will fold. They pour the aggression on and fail to think about the likelihood that their bets will be successful. While aggression is good, blind aggression can be a major leak.

The overall message you should take from this lesson is to not just blindly check or bet in a given situation because you think an opponent is “weak” or “strong”. Think about your opponents hand range and what percentage of time they will fold to a bet or raise. This is your fold equity and you should always know how much you have and how to use it. 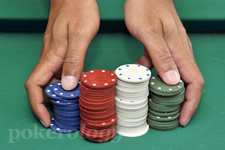 If you’re playing against an opponent who seldom folds and cannot be bluffed, just forget about fold equity. You have none.