The thrill of flopping a monster is the nirvana of hold’em. This wonderful event makes mucking all that trash for hours on end worthwhile.

Let’s look a little closer at how one might play a monster hand for maximum value before we just conclude that “Hey, it’s a monster – all you need to do is raise, re-raise or go all-in”. There just may be other criteria to consider if we desire to make the most of our monsters.

Just a Monster or the Nuts?

When this wondrous event of flopping a monster occurs the first question you need to ask yourself is, “Do I have the absolute Brazils or do I have a monster that is only currently the nuts and can be overtaken?” An example of this phenomenon occurs when you flop the nut flush while an opponent flops a set with re-draws to quads or a full house. Notice the contrast when flopping quads with no straight flush or over card to the pair on the board.

While you need to be cognizant about the current nuts that are not the absolute Brazils, those unpleasant situations of being drawn out on only occur about as often as flopping the monster to begin with. However, in no-limit it’s just this type of situation that turns what appears to be nirvana into absolute hell as your whole stack disappears. Obviously you need to be acutely aware of the texture of the board and the betting action to determine whether your monster can be run down or not. Once that status is ascertained you can proceed accordingly.

Should You Slow Play?

Like so many poker questions the answer is, “it depends”. After assessing the potential vulnerability of your monster you need to determine how you can get the maximum value from it. Flopping a monster, getting too frisky and significantly over betting the pot only to have everyone fold would be a complete waste of a monster. You want your train to leave the station with passengers aboard – paying passengers. The dolts that win nothing more than the blinds don’t deserve to have monsters dealt to them. I hope the poker gods are reading this and taking note. If you determine that you are so far out in front of the pack that you’re safe, then by all means slow play and allow opponents to catch up a little. Give them some rope so they can hang themselves!

Always be aware of how the rest of the table perceives you. Have you been playing fast poker or sitting there like a rock mucking hands for an hour? Your table image can be constantly changing as your run of cards may be dictating different actions that are interpreted by a newcomer as your style. Many players are very much aware of their general style of play but fail to monitor how the current run of cards, showdowns, etc, have made them appear to their opponents. Always be aware of your current table image so that you can take advantage of it.

The absolute best time to flop a monster is on the heels of having shown down a marginal hand that you may well have gotten out in front of and at the showdown a few eyebrows are raised concerning your loose play. Now, if on one of the next hands you’re fortunate enough to flop a monster, everyone wants a piece of you because they know that you’re playing trash. Oh, how I love to surprise them!

This is one very good reason why as tight as you might play you need to give the table an illusion of action so you can get your monsters paid off. This illusion of action is accomplished through the wider range of hands that you play in later position. Only your better opponents will factor in the position you played from correctly. Many poker players just react to the value of the hand that is showed down with the exception of blind play.

Position is a Key Consideration

Of course position is a key consideration, as it always is in poker. In terms of maximizing the value of your monster you need to get money into the middle while not chasing off your customers. In addition you need to make sure your play is not too cute and wind up being run down by an opponent that has good re-draws.

If you have shown aggressiveness pre-flop, received some callers, but are out of position when you flop your monster, it is often best to fire the continuation bet because your opponents expect it. They must have had something to call your pre-flop raise. To check hoping to get in a check raise often times looks suspicious plus you run the risk of having everyone check behind you. That will not accomplish your goal of getting chips in the pot. If you really have a strong monster, try betting out a third to a half of the pot, hope to get played back at and then make your next decision based upon stack sizes. If your opponent is pot committed you will be able to take his whole stack.

Unless you have just sat down at the poker table and your very first hand is a monster, you should have developed a feel for both the texture of the game and your opponents’ tendencies to help guide your decision making. Is this group a frisky bunch or are you sitting in the middle of a rock garden?

If the table is mixed, which is the norm, then the position of your different opponents is critical to using them to achieve your goal of maximizing profit. As an example, if you’ve determined that the player on the button regularly attempts to thin the field through aggressive play post flop – go ahead and check your monster and allow the button to do your bidding. Conversely, if it’s checked to you and the only player behind you can best be described as the Rock of Gibraltar then you need to make a wager. As always, knowledge about how your opponents’ approach the game is a critical aspect of winning play.

. An early player limps in as does a middle position player. The button now pops it to four times the big blind:

With limpers involved this raise gives you slightly more than 2-to-1 to make the call, which you do. Obviously you’re hoping to flop a set and realize you’re not getting the required odds to do so, but factoring in the implied odds, as well as the knowledge that if you don’t hit your hand you’ll be able to get away from it rather cheaply, convinces you to make the call. The blinds and limpers also call.

“Bless you poker gods”, you think as the flop comes

giving you the second nut hand:

Only pocket 3’s can beat you and you know there isn’t a sniper behind every tree. You’re first to act and you need to decide whether you will slow play or lead out with a bet. Let’s look at the likely scenarios to decide what might be the best course of action.

If you check, in all likelihood the original limpers will check to the button who raised pre-flop, who in turn will make a continuation bet. If you then raise with your monster you will probably wind up heads up with the button after the two limpers fold.

If instead you bet out but make it a small bet which one or both of the limpers may call, you will be able to trap additional chips. Now when the button raises, you can come over the top because the limpers will most likely fold to the button’s raise anyway.

I vote for leading out with a modest bet. Ideally, the button has a flush draw such as

and will feel committed to this flop with the nut flush draw. Even if all he has is an overpair to the board, he may be willing to go to war. When you are fortunate enough to flop a monster you need to visualize how the hand is likely to play out to figure how to best maximize your return.

Since it is much more prevalent to miss flops completely or just get a small part of it, flopping the nuts is a wonderful feeling. When the poker gods bestow this blessing upon you don’t squander it. Usually post flop you make decisions regarding the likelihood of your hand prevailing against the rest of the field. When you’re fortunate enough to flop a monster, your thoughts should be directed to how you can extract the maximum number of chips from your opponents. Filter your thoughts through the suggestions above before just pushing your chips forward. 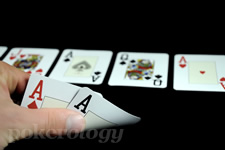 You want your train to leave the station with passengers aboard – paying passengers.