Far too many players ignore flop texture when playing Texas hold’em. Why so many players ignore texture continues to amaze me. After all, a flop’s texture is free information when you’re trying to connect the dots by evaluating the board’s composition in conjunction with the range of cards your opponent could be holding. While it’s easy to abstractly assign a range of hands to your opponent, the texture of the flop goes a long way toward delineating the range of hands he is likely holding, along with those potential hands that might have been dashed by a texture that won’t help his hole cards at all.

Poker players who bet and call without regard texture are making a costly mistake, and these are the very players you want to play against. When you take board texture into account and are able to assign a more precise hand range to an opponent because his broader range has been modified by the board’s texture, your reads on your opponents will be all the more accurate for it.

The first thing that should come to mind when thinking about flop texture is whether you’re looking at a dry or a wet board. While further refinements can be made when examining boards, step one is determining whether the board is dry or wet. Dry boards are those that offer few drawing possibilities while wet boards are rife with drawing possibilities. Boards in between are neutral.

Dry boards generally have one big and two small cards, or three small cards that do not support a flush draw, and while a ragged board might support a straight draw, it’s unlikely that your opponents would be holding cards that connect with such a flop.

Examples of dry boards would include:

Look at those flops. There just aren’t many hands that coordinate with them. While someone holding

would love the first flop, and an opponent with

in his hand would have flopped a set with the latter board, you really can’t assume your opponent has either of those hands. You have to begin assessing your opponent’s hand by assigning a range of hands to him, and when you do, the ranges supported by these two flops are quite narrow.

Playing Into a Dry Board

When examining a ragged, low flop, it’s important to account for whether anyone raised before the flop. If there was a raise before the flop and callers – especially cold callers as opposed to players who called and then called again when the pot was raised behind them – there’s a far less likelihood that a low, ragged board was the answer to anyone’s prayers.

If the raiser was in early position, and most or all of your opponents cold-called the raise, you can discount the possibility of a straight anytime you see a dry, low, ragged board, and anyone who comes out betting is either representing an overpair or bluffing.

A dry board can also contain a pair, and a flop like

is dry in the sense that it does not support any draws. That doesn’t guarantee a win for you. After all, someone might have taken a flyer with a hand like

and is now sitting pretty with a hand no one suspects him of holding. Even if someone hung around with

, he’s probably now in the lead with two pair, even with a somewhat dicey kicker.

Wet boards are the opposite of dry boards; they’re heavy with draws and well coordinated. Here are a couple of examples of wet boards:

These two flops have two big cards that would pair-up with the kinds of big cards most hold’em players are fond of, plus they support flush draws, along with a couple of straight draws. In fact, if these flops hits someone perfectly, that person already made his straight.

The more coordinated a wet board is in terms of supporting straight and flush draws and the greater the number of players in the pot, the more a wet board makes it difficult to envision winning with a hand like top pair, top kicker.

Boards like this have cards that reside in what’s referred to as the playing zone. The playing zone is just what you think it is: the area of the deck where players find cards they want to play, and it’s usually cards ranging from jack through ace, or ten through ace. When most players are dealt two cards in the playing zone, they’re going to look for a reason to play them, and only a big raise, or a raise and a reraise will dissuade them.

Board Texture and Continuation Bets

Reading the board’s texture is very important when considering whether you should make a continuation bet. It’s not difficult at all to do this. If the flop hit you hard, you’re going to bet; that’s a given. But the flop figures to miss you more often than not. If, for example, you raised before the flop with A-K, you’re only going to like the flop one-third of the time. But by evaluating the board’s texture and the range of your opponent’s likely cards, you’ll have a good handle on whether you should bet when you miss the flop.

Dry boards garner more folds then wet boards because there fewer combinations of hands to connect with them, and when you’re the pre-flop raiser and know that the flop is very unlikely to have helped your adversary, you can make a continuation bet knowing you have a good chance of forcing your opponent to fold. Even if he thinks you might not have connected with the flop, there’s always a chance that you’re sitting there with a big pocket pair. You, on the other hand, know he had nothing before the flop and probably nothing on it.

So go ahead and c-bet into that dry board and watch your opponent fold most of the time. In fact, if your opponent plays hit-to-win, fit-or-fold poker, you’ll take down the pot almost every time. Just remember not to vary your bet size too much when c-betting as compared to when you have a real hand, so your opponent can’t gauge the strength of your hand by the size of your bet.

Sometimes you can raise an aggressive opponent on the flop based on your own drawing possibilities and the board’s texture. Suppose there was a raise before the flop and you call from late position with a hand like

. We’ll assume both blinds folded and the flop is

. The flop’s texture does not support a flush draw, so you need not worry about that. And while you don’t have a hand yet, you do have a straight draw along with two overcards that might propel you into the winner’s circle if you pair either of them on the turn or the river. You’ve got lots of ways to win.

Your opponent probably raised in front of you with a pocket pair or two big connecting cards. Based on probability alone, chances are your opponent has big cards rather than a pair and if he does, he whiffed on the flop. If he has A-K, A-Q, A-J, K-Q or a medium pair like 7-7 or 8-8 and comes out betting, he might even fold to your raise, and you won’t have to see the turn or river to win the hand. The flop’s texture, coupled with the equity present in that combination of a big draws plus overcards, along with the likelihood that your opponent didn’t really like the flop, gives you a good chance of taking it down with a raise.

On the other hand, suppose you raised with

only to see a flop of

. Even if the blinds check to the raiser, you’re staring straight up at two overcards right in the playing zone. You have no draw to speak of, and are probably going to check, hoping that anyone who acts after you will also check so you can see a free card in hopes of turning a set.

Now we’ll assume you open-raised with

from late position only to see a flop of

. A low-card flop tends to hit callers rather than raisers, so a continuation bet is probably the way to go here, because the flop probably missed your opponents just as it missed you. But if you make a bet and are called, figure your opponent for a pocket pair or a draw of some sort, since these are the very kinds of hands that would call in this situation. When that happens you’ll have to be wary of any turn card that appears to support hands of that nature.

If the turn card is a big one – an ace or a king – it will appear scary to anyone on a draw or holding a small pair, so it presents you with a good opportunity to take a stab at the pot. But if the turn is a low card, you’re better off checking and probably souping your hand if your opponent bets.

Awareness of the flop’s texture – as well as the texture of the board on the turn and the river too – is a powerful tool for assessing the possible strength of your opponent’s hand. Texture, along with betting patterns, the number of players contesting the pot and their playing styles, goes a long way to raising your game far above that of a simple hit-to-win strategy, and gives you a number of ways to identify opportunities to bluff, bet on the come, or check and fold, and each of them can win or save money for you in the long run. 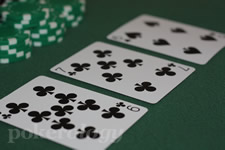 The playing zone is just what you think it is; the area of the deck where players find cards they want to play.