Dealing with Downswings in Poker

Downswings are inevitable in poker, regardless of how well you might play the game. Any endeavour that possesses an element of luck will have variance. Here is the good news and the part that should always encourage you to study and continue to improve your game … good luck is the result of preparation meeting opportunity. The point is the more knowledgeable about the game, the more emotionally grounded you are, the weaker the competition you play and a host of other variables will have a significant impact on the number of downswings you may experience versus the legion of lifetime losers at poker that you may encounter.

You’ll never be able to bring those exasperating times down to zero so let’s explore some ways to deal with them.

Take a Look at Your Game

First and foremost you need to gain a fix on the genesis of your downswing. Is it simply variance or have you lost your focus and started to play poker poorly? Asking tough questions of yourself and demanding honest answers can be very effective.

I try and use the inevitable downswings as a time of renewal. When you’re running well even the most grounded among us tends to puff out his chest with pride at how well he has mastered the game of poker. If you reach that level of hubris it is tough to invest the time and effort to improve – because you don’t think you need to. The harsh reality is you always need to be improving because if you’re not you’re going backwards relative to the growing strength of your competition. Use these frustrating times to ferret out the reason the downswing has occurred and then work to counter its effect and get back on the winning track.

The title of this lesson presupposes that you are a winning poker player. If you are in a constant state of downswing then I think you know you need to work hard by studying and gain playing experience to become a winning poker player. If you are a winning player you know that downswings are a negative that, if approached correctly and positively, can be turned into a positive. When a downswing occurs there are many ways that one can react. These are the most common reactions:

Let’s take at look at each of them in detail…

All of the listed reactions to downswings are worthy of consideration, including cursing the poker gods. Who among us has never cursed the poker gods? I know I have, if only to vent some frustration and then get back to the task at hand. While a brief rant against your bad fortune may be therapeutic, dwelling on your misfortune and thereby reinforcing the negative vibe which surrounds grumbling and whining will not help reverse the situation. In fact, it may well extend it. So, if you feel the need to curse the poker gods go ahead and then get focused to something that will actually help.

One should always be in this mode of operation as it is the route to winning poker. It is also the best way to determine if your current state of affairs is just variance or, if it continues, there may be a deeper, darker meaning to it. Maybe, just maybe, the decisions which you believe are good may be flawed. That ominous thought leads us to the next element.

If It’s Broken, It Needs to be Fixed

Since the third, fourth and fifth reaction to a downswing are interrelated we’ll group them all under “If it’s broken, it needs to be fixed”. If, in fact, you recognize that something is amiss in your game, then it is broken and needs to be fixed. Many poker players, as they grow stronger in their game drift away from basics. They open up their starting hand values with the belief they can outplay their opponents after the flop. While this may be true, it may smack of arrogance and when they meet up with competition that might be playing above their skill level becomes problematic. It is always a positive action to review basics and to rededicate yourself to improvement.

When you’re running well it is natural to take pride in your accomplishments. However, if that pride turns to hubris, you’ve taken the wrong fork in the road. Show me a poker player who believes he pretty much knows it all and I’ll show you a player doomed to coming face to face with the reality of how false that belief really is. Sometimes all your game really needs is a little tweaking not a complete overhaul. Be objective and if something is broken then work hard to fix it.

Dropping Down in Limits

How long have you been playing at your current limits? Have you been beating this game for some time or have you just recently stepped up? These are important questions that need to be asked and answered honestly. Entering into a downswing is not the time for denial.

There is a conventional wisdom in the business world which gained its name from a very successful book named The Peter Principle. The Peter Principle states that in a hierarchy every employee tends to rise to his level of incompetence. Facing the possibility that you may have reached your level of incompetence against stronger competition can be a hard pill to swallow. But swallow it you must or you will just fritter away your bankroll.

Even if you have played at your current stake level but are now in a downswing, it isn’t a bad idea to drop down temporarily as you address how to reverse the current downswing and get back into the winning column. The competition should be a little weaker on balance and if the downswing continues it won’t damage your bankroll as much.

Taking some time off and getting away from poker can help you deal with the negative feelings that accompany downswings. We can all get burned out on occasion and a downswing just exacerbates the negative vibe so finding another outlet for your competitive juices can both refresh you and save your bankroll. The game will be waiting for you when you’re ready to return.

Seeking Out a Coach

Formal poker coaching has become an industry since poker’s popularity soared off the charts several years ago. Coaches come in all forms – live, internet and the written word as well as cheap, reasonable and very expensive. However a poker coach can also be a friend who has a greater knowledge of the game than you do. Discussing poker hands and strategies can always be beneficial as not everyone has the same outlook on the game. The intent of this avenue of improvement is not to recommend specific coaches or boot camps but to advise the reader that it is another viable way to improve one’s game. Maybe you have reached your own aforementioned Peter Principle and you need some advanced poker coaching to help you reach a new level.

Handling downswings in a positive manner to move forward is the hallmark of a winning player. Using these frustrating periods of time as a wakeup call to learn something new can be rewarding. You should task yourself to read a new poker book, become active in a poker forum – like right here on Pokerology, exchange views and strategies with players you respect, perform post mortems after your sessions for both winning and losing hands and maybe, most importantly, add something of your own to this list.

Something as simple as committing to paying close attention to the game will help you on your journey. Are you paying attention? Try giving yourself a pop quiz during your next session to determine your level of observation. After enough time has elapsed to know, ask yourself who the two strongest and two weakest players are at your table. If you need to think about it, you’re not paying close enough attention. You should already be steering clear of the tough opponents and exploiting the weak ones.

This kind of commitment to excellence will make you lucky. Lucky, you ask – why yes indeed, as good luck is the result of preparation meeting opportunity! 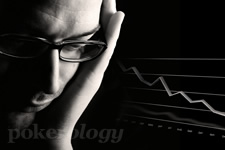 Handling downswings in a positive manner to move forward is the hallmark of a winning player.