The first step is to equate the size of your stack to how many big blinds you have available. This is calculated by dividing the current big blind by the number of chips you possess and dropping any fraction. Thus, a player with 2250 chips at a 50/100 blind level would consider himself to have a 22 big-blind (or 22BB) stack.

Many players typically buy-in to a cash game for around 100BBs, but poker tournaments can vary greatly from that number. For example, most SNGs will start with anywhere from 75 to 150BB stacks while large online tournaments can offer as much as 200BB stacks to begin with. Live deep-stacked tournaments often start with as many as 300BBs – so there’s quite a difference. The depth of stacks will have a significant impact on the strategies you employ at the poker table.

Before we mention how stack sizes influence our play in certain situations, it’s important you understand the concept of effective stack size. As a poker tournament progresses the stack sizes will vary considerably. You may have more chips or fewer chips than an opponent at any given time. The shortest of these stacks is what is considered the effective stack size of the hand since this is the most chips that either player can win from each other. You might have a 50BB stack, but if your opponent only has 10BBs available then your strategy needs to reflect that fact.

It’s now time to examine how the size of your stack size will affect your play. Let’s start by assessing the strategies you can employ when you’re sitting there with a deep stack.

You have room to play your normal poker game. The early stages of tournaments can often reflect what you might see in a ring game, particularly if the players are really deep-stacked. With this many big blinds in everyone’s stacks your full bag of tricks is in play. You can re-steal and still fold to aggression, 4-bet bluff, call in position and speculate with suited connectors and small pairs. You have room to manoeuvre with semi-bluffs, traps and speculative hands without much fear of severely crippling yourself with a mistake or bad read. You have leverage but once the ratio of your stack compared to the blinds starts to get smaller many of these plays can become inefficient. If you are in the 45-60BB range then you also need to be acutely aware of any potential blind level increase.

With this sort of stack size you still have most of your plays available. However, you should generally avoid re-raising in a spot where you would not be willing to call a 4-bet/shove. You will most likely be committed to the hand at this point when comparing the pot odds to the range of hands most opponents would play back at you with. An exception to this would be when you’re playing against someone who will fold a very large portion of his opening range. This player is probably raising light with his weaker hands (in an effort to steal the blinds) and will only commit all of his chips with the very best of holdings. Against random opponents you will usually not have that read so avoiding the situation is usually best.

With this stack size you have some breathing room but will need to be cautious in what hands you decide to open raise with. Limping small pairs and speculative hands is no longer an option as your implied odds are just not available with this stack size. However, this isn’t to say that you can’t raise with them in the right situation. Just be very selective when you’re in early position. In late position you can be very aggressive, especially if the players in the blinds are not liable to re-steal or re-raise very much. Also, if you’re considering a re-raise from the blinds with the high end of this size stack (30-35BBs), a good tactic may be what is known as a “go-and-go”. This is when you make a re-raise to roughly 30% of your stack and, if your opponent just calls, you can shove on any flop – unless you happen to flop a very strong hand. A hand like A-Q or A-J is ideal for this tactic.

Almost any hand that you decide to raise with should be one that you are willing to go with all the way, should you be re-raised pre-flop. In fact, this is very often the ideal stack size to re-raise all-in with. If you are going to re-raise then it will be for at least half of your chips. By doing this you are committing yourself to the hand so you might as well go ahead and get it all in. This also means you can take advantage of any fold equity you might have, which is your ability to make your opponent fold and take down the pot uncontested.

You’re now a short-stack and don’t have much room to play with. Your aim should be to double up and get back in the game. Any move you make pre-flop that isn’t a fold should be an all-in shove. While you should be somewhat selective with your hand ranges, you don’t have time to wait for Aces of Kings. Other factors may determine just how wide your range of shoving hands will be (like the bubble of a SNG) but you should not be afraid of playing for your stack. If antes are in play then shoving when you have as many as 15BBs in usually correct – since the size of the pot is that much larger and worth fighting for.

When you’re this close to the felt you will need to act fast. The blinds (and antes if in play) are going to take a significant chunk of your chips so you need to build your stack back up and out of the danger zone. If you play a hand then it must be for all your chips. You have no room for traps and tricks. In fact, things like limping and min-raises will draw more suspicion from your opponents than an all-in move would.

If it folds to you then you’re probably going to have to shove with any two cards, no matter what your position at the table. Unless there is a very good reason (the bubble of a satellite for one) the best thing to do is to push-and-pray, especially if it is still early in the tournament. Clearly, you have no fold equity and won’t threatenanybody with your stack. The odds are that you will be called by just about anything and will have to win at a showdown.

Realize that many poker players at the lowest levels will not know about the concept of chip stack management. They will instinctively know that it’s correct to shove a short stack or call a bit wider in some spots, but you will find many of your opponents to be generally unaware of how their chip stack should be used.

Your chips can be used as weapons and are often more important than your actual cards. The more weapons you possess, the more options you have available to you during the course of a poker tournament. A large stack gives you the most flexibility while a short stack will constrain you greatly, often limiting you to a push-or-fold strategy.

Keeping track of your chip stack and be able to effectively adjust your playing strategy is perhaps the most important skill a tournament player can possess, especially with regards to the endgame or final table play. With practice you’ll be able to master this skill and have a considerable edge over the vast majority of your opponents. Take the time to recognize these situations and good luck at the tables. 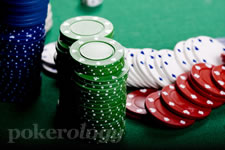 Your chips can be used as weapons and are often more important than your actual cards.