In our lesson on the three main betting variations of poker, we used an example where a player in a no-limit game could bet far more than anyone else at the table, provided the player had such an amount. Poker is always played at table stakes, and this means you can only wager the amount of money you have in front of you when the hand begins. It is quite common for a player to run out of money during a hand. If you have more money than another player, it doesn’t mean you can bet them out of the pot because they can’t afford to call your bet. Otherwise the poker player with the most money would always win if he bet all his chips, and it wouldn’t be a very enjoyable game.

When a player puts all his chips into the pot he is said to be “all-in”. The important thing to know is that a player can never be bet out of a pot because he always has the option to call for all of his chips. For example, a player with $50 goes all-in, and everyone folds apart from a player who only has $30 left:

In this example the shorter-stack wins the pot, but the surplus $20 is returned to player 5.

The whole point of this is that players can take back any extra money when another player is all-in for less, when nobody else has called. The same applies to an extreme no limit example, where a player might bet $10,000 in a $1/$2 game. Here’s an example where it’s folded around to the big blind, who has $10 remaining in his stack.

It can be a little more complicated when there’s more than two players involved in a hand. This is when a side pot is created for the other players, and any further bets cannot be won by the all-in player. The all-in player is eligible for the main pot only.

Take a look at figure 4, below, which shows three players remaining in a hand. Two players have $50 each, and another has just $10 remaining. In this example the pot already contains $40 from the previous betting rounds. Player 5 makes a bet of $20:

The main pot now contains $70, which is made up of the existing $40 in the pot, plus $10 x 3. Player 6 is “all in” and can only win this main pot. A side pot containing the extra $20 is created, and can only be won by the players who contributed to this side pot (players 5 and 7). The next card will be dealt and further betting will take place. Any further bets are added to this side pot, and not the main pot. Players 5 and 7, who contributed to the side pot, can win the side pot and the main pot, if their hand beats the “all in” player. If player 6 has the winning hand after the final betting round, then he will win the $70 pot, but the side pot will be won by either player 5 or player 7.

There has been quite a bit of information in this lesson, which to the uninitiated could be confusing. As soon as you start playing poker you’ll quickly become familiar with these betting basics because they occur very frequently. Sometimes there can be lots of different side pots during a hand involving lots of different players – whether it’s limit, pot limit, or no limit poker. This is because not everyone has the same amount of chips – and players who have fewer chips than an opponent cannot win more from a player than they contributed themselves. The important thing to remember is that a player can never be bet out of hand because he doesn’t have enough to call. 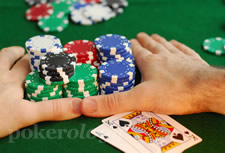 A player can never be bet out of poker hand, even if he doesn’t have enough chips to call the bet.