There are many different forms of poker including seven card stud, Omaha, five-card draw, and Texas hold’em to name a few. Hold’em has evolved as the most popular game worldwide and is the form we shall use to cover the basic rules of poker.

In this lesson we’ll take you step by step through the basic rules of poker and we’ll use an example hand to illustrate. You can read the text that follows or alternatively you can watch the video version instead. Watching the video is probably the better option because it’s easier to follow the betting action, but the choice is yours.

The game of hold’em is typically played with nine or ten players at the table.

In our example we have ten players. The dealer button is on player 1, the blinds have been posted, and each player has received their hole cards. If this doesn’t make sense to you, then don’t worry we’ll explain exactly what this all means.

The dealer position is also called “the button” and is the most favourable position in the game as that player gets to act last after he has seen everyone else make their decisions. The exception to this rule occurs on the very first round of betting wherein the “blinds” will act after the button.

Before any cards are dealt the two players to the left of the dealer button are required to post what are referred to as the blinds. These are forced and compulsory bets that encourage the action and give players something to shoot for. Typically there is a small blind directly to the left of the button, who posts half the size of the big blind’s obligation. The amount of the blinds is determined by the stakes of the game.

In our example we’re using blinds of $1 and $2. In case it’s not obvious, they are called blind bets because the two players are required to post them before they see their cards.

This first betting round is called the pre-flop betting round. The first player to act is the player directly to the left of the big blind (in our example this would be player 4) and he has three options; to call the amount of the big blind, which in our example would be $2, to raise, or to fold. If a player decides to fold then they muck (discard/throw away) their cards facedown and sit out until the next hand is dealt. The action then follows around the table in a clockwise direction until each player has been afforded the opportunity to call, raise or fold.

The whole betting procedure of poker can be a little confusing for beginners. In our example hand you can see that players 2 and 3 have posted the blinds. If all the players to the left of player 3 decide to call the $2 bet then the action is on the small blind, player 2, who has so far only posted a small blind of $1. He now has the option to call $1 more to make up the bet, or he can raise. If he calls the extra $1, then the big blind is left with the final option. Since the blind bets are made before the cards are dealt, they are considered “live” which means that even if all the other players just call the big blind he then still has the option to raise, if he wishes. If the big blind doesn’t want to raise then the betting round is over and we can move onto the flop, which we’ll explain in a moment.

In our example player 6 raised the betting to $4, player 7 folded and is now out of the hand. Player 8 called, but players 9, 10, and 1 all folded and are also out of this hand. Players 2, 3, 4, and 5, all called player 6’s raise. Once all bets have been equalized (i.e. matched), then the betting round is over. In our example, six players are now left in and the pot contains $24 ($4 x 6). This brings us onto the next betting round, called the flop.

Do you have other poker questions? We fully recommend reading the book Unfolding Poker and getting usable answers that you can put to use in your NEXT session. 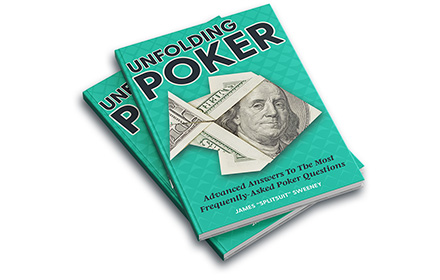 And if you enjoy audiobooks, be sure to grab the audiobook combo and turn your next drive into a coaching session!

After the first round of betting is complete three community cards are dealt face up in the middle of the table. All the active players can use these three cards, along with their two hole cards, to make their best possible hand. These three cards are known as “the flop”. Here’s the flop before any further betting has taken place:

You will notice that all the bets from previous round (pre-flop) are now in the pot. After the flop has been dealt, another betting round begins. The first active player to the left of the dealer button starts the action. In our example this is the small blind from the opening round, player 2. The forced action created by the blind bets no longer exists and that player has two options; to check or bet. A check means to neither open the betting nor fold. When a player checks the action moves onto the next active player, who may also check. If a player wants to check they either verbally announce “check”, or they tap the table with their finger or hand (or click the mouse if playing online poker).

If a player decides to open the betting, the option to check is over, and a player must either call, raise, or fold – this includes any players who have previously checked. Once all bets for this betting round have been matched or every player has opted to check, then we move onto the next betting round. For our example hand, let’s suppose that after the flop was dealt, players 2, 3, 4, and 5, all checked. But player 6 then bet $2, which was called by player 8. Players 2, 3, and 4 all fold, but player 5 calls the $2. These three players get to see “the turn”.

After the second round of betting (the flop) a fourth card is dealt and that card is called “the turn” – it’s also sometimes referred to as 4th street. In our example hand we have three players remaining:

You will also notice that the pot now contains $30, which is made up of $24 from the first betting round, and $6 from the betting on the flop. After the forth community card (the turn) has been dealt, another round of betting takes place, exactly the same format as the previous betting round, starting with the first active player to the left of the dealer button. In our example, this would be player 5. He may check or bet. Let’s suppose that player 5 checks, as do players 6 and 8. If all the players check, the round is over, and we move onto “the river”.

After the third round of betting is complete the fifth and final board card is dealt and that card is called “the river” – it’s also sometimes referred to as 5th street.

In our example hand, there is $30 in the pot and player 5 bets $4. He’s raised by player 6 (who makes it $8 total). Let’s suppose that player 8 folds, and player 5 decides to call the extra $4. When the final betting round ends with two or more active players (as our example has done), then we get to what is called a “showdown”.

After the final betting round is completed, it’s time to see who has won the hand, and the money in the pot. Now that all of the cards have been dealt, each player can combine his two hole cards with any of the five cards on the board to create his best five card poker hand. The winning hand must been seen, which means players can now reveal their two hole cards. The player that was called (player 6) is required to show first. Figure 7 shows an example showdown after both players have shown their hole cards:

In our above example it was mentioned on more than one occasion that not all hands will reach the point of a showdown. It’s important that you realize that a hand of poker can be over even before the players get to see the flop. Our example hand made it to a showdown, but if a player had made a bet which wasn’t called during any of the betting rounds, then this player would’ve won, uncontested. Think of it like a boxing fight, where a fighter could land a knockout blow in the first round, or both boxers could still be standing after 12 rounds, in which case it’d be decided on points.

It’s also worth noting that if you do get to a showdown scenario then you are not obligated to even use your two hole cards. If the best five card hand you can make is comprised of the five community cards, you are said to be playing the board. For example, if the five community cards (flop, turn, and river) made up a Royal flush, the best possible hand in poker, then all the remaining active players would share the pot, regardless of their hole cards. Even though each player has seven cards in total, only five of them count – your best five.

Of course there are many other rules and important concepts you need to understand, but hopefully you’ve learnt a lot from this lesson. The game of Texas hold’em is a deceptively simple game, but as you move through the myriad of poker lessons here on Pokerlogy you will experience an astounding wealth of information and strategy. 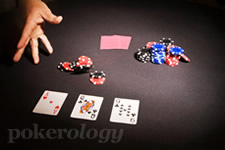 In a showdown the ‘cards speak’ – meaning the player with the best poker hand wins the pot.