For players looking for a safe alternative to major online poker sites, some social networking sites often provide free “play money” poker games against real players. One of the most popular games is Zynga Poker, available through Facebook. As we take a look at this online poker alternative, we’ll examine how it stacks up to the “big boys” of the industry (see our list of the top online poker rooms).

The Flash-based game does not require players to download new software or register their information. Each browser window holds a game screen and Facebook holds all of the personal data. Players start with $1000 in “play chips” and accumulate more chips through ring games our sit-and-go tournaments. If players run out of chips, they can return to the site the next day for a fresh $1000.

The Flash game was developed for a mass audience who may not have had as much exposure to online poker as most players. New players have the option of running through the tutorial slide show. The tutorial covers “poker hands”, “betting basics” and “smart folding” poker strategy lessons, as well as getting acquainted with the software interface.

Players familiar with MMORPGs understand the concept of “experience points” and “leveling up”. If you’ve ever wondered if the player on the opposite side of the virtual table was a newbie or a shark, Zynga Poker shows their experience level. In addition to the numerical rank, the software labels the player as a “Fish”, a “Playa”, a “Shark”, an “Ace”, or any of a number of different nicknames assigned to their status.

Players can earn one or two experience points with every hand they play. Winning a hand earns a player more points. After reaching a new level, the player earns more chips, but the number of points required to reach the next level goes up. The pursuit of the next experience level often resembles “chasing bonuses” on real money poker sites.

In the spirit of this summers FIFA World Cup tournament, Zynga Poker allows winning players to collect footballs designed with the flag of each participating country. When players collect all the balls in a tournament group, plus a special ball, they can redeem the set for more chips. The “collectible” game adds another element for players to chase.

Like many play-money sites, Zynga Poker features many players who are inexperienced at the finer points of the game. Regardless of if the software has labeled them as a “shark” or a “rounder”, most of them don’t understand when to fold a bad hand. A table full of loose, inept players favors the experienced, patient hunter who can sit on a good hand and take down the big pots when the opponent overplays the second- (or third-) best hand.

Since poker is a social game and Facebook is a social networking site, Zynga Poker also rewards players for their social skills. Players can win chips by inviting their Facebook friends to the game. Friends can gather around the same table to play in a relaxed, casual environment.

Like many other Zynga games, such as Farmville or Mafia Wars, Zynga Poker can be just as addictive as its real-money counterpart. However, the game also has numerous other issues that will frustrate and confuse many online poker veterans.

No Cheating or Collusion Prevention

“Why cheat at free online poker?” Why not? According to the site’s guidelines, “Our community thrives on trust, fair play, and good gamesmanship.” Obviously, they don’t know poker. Angle shooters and colluders are practically commonplace in online poker, and even free sites are no exception.

Too Many On-screen Distractions

Ads, promotions, gifts, and other assorted animations can crowd out the action and distract players from the actual gameplay. With the game itself crammed into a small space on the browser window, players need a 50” monitor to see their cards.

No Note-Taking or Player Tracking

Players who enjoy the more predatory aspects of online poker will find Zynga Poker a huge disappointment. Since the software is browser-based, it does not allow for taking notes on an opponent’s tendencies. In order to find a “fish” at another table, players have to search table-by-table to find their favorite ATM.

One experience that Zynga Poker does not provide is multi-table tournaments. The site offers one-table sit-and-go games at a wide range of levels, but does not have multi-table events like the major online poker sites. Of course, the major sites also offer large cash prizes in their events.

No Cash Rewards and Few Prizes

As a free poker site, Zynga Poker explicitly states that their chips are for “entertainment value only” and that they cannot be cashed in “for real-world funds or prizes under any circumstances”. If you’re looking at Zynga Poker for your seat at the World Series of Poker Main Event, forget it.

The best prize that Zynga Poker offers is a Nintendo Wii video game system. Players must win three consecutive sit-and-go tournaments to qualify for a random drawing. The scenario is much like if the Main Event played down to the November Nine, then Doyle Brunson drew a name out of his Stetson to determine who wins the championship bracelet.

Omaha, Stud and mixed-game players need not apply. All the poker tables and tournaments are strictly “no fold’em hold’em”.

Despite how rewarding it can be in these settings to play basic, high-hand poker, many players find such an elementary strategy boring and confining. Not only do opponents improperly read a player’s intentions behind their bets, they often either don’t know or don’t care how wrong they are.

Such opponents often fall in love with baby aces, suited cards, and other assorted junk hands. When they hit their hand on the river, well after they should have folded, they think of themselves as the next Phil Ivey. When they miss, they chalk it up to “bad luck”. Poker players should remember that they can’t beat someone who’s not playing the same game.

Serious online poker players don’t need to be told to stay away from frivolous, unprofitable games like Zynga Poker. However, if you want to waste an afternoon chasing the next experience level or virtual reward, you’ll have a ball (or several)! 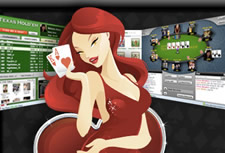 If you’re looking at Zynga Poker for your seat at the World Series of Poker Main Event, forget it.