US Government is Wrong About Online Poker

However, I must admit my confusion and dismay as to how the US government has handled the explosion of popularity of online poker. While it is still technically legal for millions of Americans to play online poker, the federal government is doing everything in its considerable power to kill this industry.

Let me make it clear that this piece will not argue about the inherent “morality” of gambling. According to the Declaration of Independence, Americans are “endowed by their Creator with certain unalienable Rights, that among these are Life, Liberty and the Pursuit of Happiness.” If one American’s “Pursuit of Happiness” involves chasing an inside straight draw all the way to the river on a four-flush board, who are we to argue?

The intent of this piece is to expose the fallacies that the enemies of legal, regulated online poker use to justify their crusade against a game that has its root in the American spirit, driven by American technology and has been enjoyed by millions of Americans, including several past residents (as well as the current one) of 1600 Pennsylvania Avenue in Washington, DC.

Fact: Any legislation that claims to “protect children” from information or activities ranging from online poker to video games to movies and TV shows fails both children and adults. Such misguided attempts at paternalistic rule fail the children since they seek to absolve the parent of their responsibilities. Regardless of the issue, it is not the job of the government to dictate what children should see, read or do in a free society; that burden falls on the child’s parents. When the state takes more of an interest in raising children than the parents do, their good intentions make for wonderful paving stones on the road to the hell of despotism.

At the same time, these laws also carry the intention of treating adults like children, as if an adult in such a free society did not possess the basic functions of decision-making and must be protected “for his own good”. Prohibitions such as these only seek to limit the adult’s personal freedom, even if such choices lead to mistakes. Author Jacob Hornberger once wrote, “If you are not free to choose wrongly and irresponsibly, you are not free at all.”

Fact: By that logic, if all casinos, sports books, horse tracks and state lotteries closed down today, the problem of gambling addiction would be gone tomorrow. The argument against online poker is that, with the convenience of the internet, playing online is much easier than going to a land-based card room or home game, thus making it easier for players to rack up massive debts. This argument uses the famous slogan, “Click your mouse, lose your house.” The problem with this catchy slogan is that it ignores the fact that most reputable online poker and gaming sites have strict limits on how much a player can deposit within a certain time period. Also, most banks, credit unions and credit card issues, as well as online payment processors such as Neteller and PayPal, will stop or flag transactions over a certain limit. Of course, politicians and crusaders have never let facts get in the way of a good catchphrase.

Fact: Most online poker players are familiar with the stories of cheating scandals on sites such as Absolute Poker and UltimateBet. While this piece won’t rehash the details of those stories, the point is that prohibition of these sites did nothing to either discover or stop these incidents. The only reason that these scandals saw the light of day was due to the diligence of the players, many of them Americans, who found the discrepancies and reported them to the site owners. This idea of an industry capable of such self-policing has escaped many in Washington; especially considering the high-stakes gambling losses incurred in the financial industry that has cause the current economic crisis.

Fact: First off, try to work through the mental picture of Osama Bin Laden sitting in his cave with his laptop debating whether he should call an all-in bet with a nut flush draw on the turn. Now, if the Department of Homeland (In)Security is so worried about online poker funds being used to finance drug cartels and terrorists, then bring those sites onshore and use the techniques used to track down other criminal financial enterprises that run through legitimate banks. If the Justice Department is so concerned about the “threat” on online poker that they would go so far as to seize $33 million in players’ money – that’s player’s money, much of it American players’ money, not the evil offshore site’s money – then use the legal processes such as warrants, trials and other silly little frivolities provided by an ancient document that they seem so fond of ignoring: a little something called the United States Constitution.

Many Americans will celebrate the 233rd anniversary of the signing of the Declaration of Independence with cookouts, ball games and fireworks. A few may even play that Great American Card Game we call “poker”. Some may even play a few hands online with other players from all over the globe. All Americans would do well to remember those brave men who signed that document on that sweltering day in Philadelphia. They should remember those men who pledged “our lives, our fortunes and our sacred honor.” If they were poker players in those days, they would’ve simply said, “I’m all in.”

One Response to “US Government is Wrong About Online Poker” 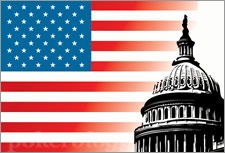