When Poker’s Not Only About the Money

I am principally a stud player. Stud players tend to be older than hold’em players. Even at 52, I tend to be just about the youngest player at the stud poker table. Being gregarious by nature, I’m frequently meeting, befriending, and getting into conversations with senior citizens.

Invariably, our conversations turn to matters other than poker strategy. As it happened, an older player and I were talking about the question of what the long run is. He was telling me about a young gun he met in a no limit hold ‘em game who was bragging that he had just beaten a $1/2 no limit game for $1,500 in a three hour session. “I’m winning $500 an hour” the young guy was bragging. “At this rate I’ll be able to quit my job and just play poker full time” he added.

My senior friend, Roger, was shaking his head and laughing about it. “Can you imagine” he said “he thinks a three hour session means something, when it really doesn’t mean anything at all” he added. “It’s all just one long game. What matters is the long run”.

I nodded my head in assent. I had heard this and said as much myself for a long time now. It’s the long run that really matters. But what is the long run? And why does it matter?

I had another friend, Alex, – also a senior citizen. He has since passed away. He was the father of a poker playing buddy of mine. Alex played at Foxwoods religiously, every Tuesday night, for more than ten years. I had occasion to sit down with him a few times and talk about his play. He liked the fact that I wrote poker articles, and we frequently talked about them. I had just had one published about keeping records – an article in which I detailed how I kept careful records to track exactly how much I was up during different times of day, at different limits, and at different casinos.

“I liked your article” Alex said. “But you know, I never keep records of any kind. It’s not worth it for me.”

At first I was surprised. Alex played regularly and seemed to take his poker very seriously. I figured he’d want to keep track of how much he was ahead and behind, and under what circumstances – just as I and other serious players do. How else would he know if he were ahead or behind? It would be like playing baseball but not keeping score.

But as we talked, I understand better what Alex meant.

He explained that the money wasn’t really important. At 83, he knew that he had enough money to do what he wanted. The $100 or $200 more or less each week that he won or lost at the $1-5 spread limit stud game would have zero impact on his life style. He wasn’t looking to get rich at poker; and he had no risk of going broke at the table either. He came to socialize, to talk, and to engage his mind in what was for him the interesting and challenging activity of playing poker. The score, such that he kept it, was not nearly as important as the process of playing poker.

At first, I tended to discount his interest in the game, thinking that he wasn’t really a poker player. But as I saw him in the poker room, having a good time, enjoying the play of the hand and the company of his fellow players, I realized that his mode of play – for the fun of it as it were – was just as legitimate as my mode of play – for the profit of it. Who was I to judge Alex as being a less serious player than I? He seriously enjoyed the process of play. Wasn’t that worth just as much as seriously enjoying the profit of it?

Let’s get back to the question of the long run, and I think you’ll understand the deeper truth to my senior friend Alex’s approach to the game.

OK, you knew that. In the short run, luck can triumph over skill; but in the long run skill trumps luck. No revelation there. But what matters in the really long run – the really, really, long run. What matters then?

As I ponder that, the really long run, I think that my senior friend Alex, who didn’t keep score, but only cared about making friends, having fun, and exercising his mind may have had it just about right all along. 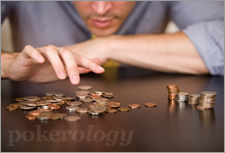 The score, such that he kept it, was not nearly as important as the process of playing poker.