Revenge of the Nerds: Top 10 Nerds in Poker

Back in the “good ol’ days”, poker was played by men (and only men) with names like “Amarillo Slim”, “Texas Dolly” and “Miami John”. In those days, when you walked into a poker room, you had better be armed with more than just a bankroll. Cigarette smoke clouded the air and players announced their raises through whiskey-scented breath. Poker tables were strictly the domains of tough, rugged, unshaven men; they were certainly no place for four-eyed, pencil-necked geeks. In those days, the keys to poker success didn’t come from brains, but from steel (nerves), stone (heart) and brass (err, something lower).

Nowadays, dorks and dweebs from all over the world have exchanged chess for chips and mana for moolah. With the influx of “reformed” nerds into the poker world, they have made the game more accessible and themselves rich. They have also accomplished what may have seemed impossible at the height of their geek-dom: they have become the ones the “cool kids” want to emulate. Here are some of the most notable nerds who have achieved poker success:

The “Professor of Poker” started his “undergraduate” work in poker while playing high-level chess at clubs in New York. Lederer was on his way to achieving the rank of chess “grand master” when he visited Manhattan’s infamous Mayfair club (a fictional version of which appeared in the movie Rounders) and played alongside such notables as Dan Harrington and Erik Seidel. Although he was not a consistent winner in those games for years, the drive and emotional control he learned at the chessboard pushed him to his current level of success at the green felt table.

Before he finished second in the 2004 WSOP Main Event, David Williams made a name for himself at a different card game. His success at the wildly popular Magic: The Gathering game earned Williams several titles and cash prizes before he was banned from the game for a year for allegedly marking cards. His poker success, including another second-place finish at the 2004 WPT Borgata event in Atlantic City and his first WSOP bracelet in the 2006 $1500 buy-in seven-card stud tournament, shows that he can still make the magic happen.

Talk about a professional student: Ferguson spent thirteen years as a graduate student at UCLA, earned master’s degrees in both math and computer science and a doctorate in computer science. He also played online poker before it became the phenomenon it is today by playing “play money” games with the now-obsolete Internet Relay Chat (IRC) client software. His extensive knowledge of game theory and probability have made him one of the leading players in the game today, with more WSOP bracelets, final tables and cash finishes than any player in the last ten years.

One of the ways Greg Raymer supplemented his poker bankroll was to sell fossils to other players as card protectors. Even after winning five million dollars at the 2004 WSOP Main Event, he still sells fossils on his website – not that his bankroll needs the help. With his aggressive style and trademark holographic glasses, Ty-Raymer-Saurus Rex doesn’t look like he’ll go extinct anytime soon.

AKA: The Nerd Who Started It All, Moneymaker was a pudgy accountant for a Tennessee restaurant chain when he played in an online satellite for a seat in the 2003 WSOP Main Event. At one point in that tournament, Moneymaker considered dumping off his chips to win the $8000 consolation prize instead of the $10000 “lottery ticket”. Instead, his friend talked him into taking the chance and he hasn’t looked back since. The ripples of the “Moneymaker Effect” are still being felt today with larger tournament fields, bigger prize pools and more major tournaments offered every week.

Varkonyi may best be known as the last WSOP Main Event winner before The Great Poker Boom. Bald, bespectacled and short in stature, Varkonyi still looks like the guy the seniors shove into lockers and steal his lunch money. With his $2 million win in 2002, his bullies can now dine on steak and lobster! He has also had some brushes with greatness in his own right. His coach for both this 2002 and 2003 WSOP runs was also the mastermind behind the infamous MIT Blackjack Team. His win also forced “Poker Brat” Phil Hellmuth to shave his head to pay off a bet. Anyone who can humble “The Greatest No Limit Hold’em Tournament Player Alive™” to that extent deserves the respect of nerds everywhere.

Before he turned 21, Phil Gordon earned a degree in computer science from Georgia Tech. Before he turned 27, he earned more than a million dollars after Cisco Systems bought out his start-up company. Before he was 30, he had traveled across the country and visited every major league baseball stadium. If all of those accomplishments don’t make people feel small enough, he also stands 6’9” – he can look down on basketball stars LeBron James (6’8”) and Kobe Bryant (6’6”)!

Before he got his start in poker, Andy Bloch got acquainted with the casino lifestyle through his association with the notorious MIT Blackjack Team. He also produced and starred in an instructional DVD on card counting called “Beating Blackjack”, which includes many of the tips, tricks and signals used by the original team. Bloch is also a multi-faceted nerd, with a master’s degree in electrical engineering from MIT and a law degree from Harvard, so of course he uses his extensive (and expensive) education to play a card game!

Brodie was one of the first one hundred employees at a small Seattle-area software firm called Microsoft. He was the leading programmer on a software project that millions of people use every day: Microsoft Word. His main claim to fame is inventing the “red squiggly line” that displays under words that the software doesn’t recognize (like “Brodie”). Now he has moved from playing nickel-ante poker with uber-nerds Bill Gates and Steve Ballmer to gunning for millions against the best players in the world.

Forget the old guys in cowboy hats, the young punks in hoodies and the jocks at the Alpha Beta house. Tournament poker is the setting of the true-to-life sequel to Revenge of the Nerds. 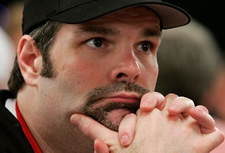 Nowadays, dorks and dweebs from all over the world have exchanged chess for chips and mana for moolah.