Picture a man, sitting on a hillside. He has a gun and he’s firing random shots at the side of a barn some yards away. Before long, the wall of the barn will be riddled with bullet holes. Despite the randomness of the shooter’s aim, the holes will be unevenly distributed. Inevitably, there will be gaps and clusters. If he wants, the shooter can walk up to the barn and paint a circle around the biggest cluster of bullet holes. To the casual observer, it will now appear that the man is a terrific sharpshooter. This is known as the Texas Sharpshooter Fallacy.

Now imagine you’re at the poker table, sitting in the cutoff seat. The action is folded to you as you look down at the

. You open with a standard raise and the button – an aggressive, trash-talking, chip-shoving blockhead re-raises. Folded back around to you and after a few raises back and forth, the two of you finally see a flop, which arrives

. Faster than you can say “pot-committed” all the chips are in the middle and the cards are on their backs. Your opponent shows a pair of red kings. He has you covered.

But you still have many outs and a good shot at taking down this huge pot. Your blockhead opponent knows this too and yet he cannot hide his disappointment when one of your outs, the

, spikes on the turn. You almost feel sorry for him; all the swaggering bluster has gone out of him now. He’s just a another poor player about to lose most of his stack, ironically on one of the few occasions he had a real hand that he played well. Of course, there is still one more card to come but now your opponent’s chances are reduced to just one solitary out – the king of clubs. Any other card on the river and victory will be yours. You make a nervous joke about dodging a one-outer as the dealer peels off the final card, and there it is. The king of clubs. The blockhead pumps his fist and erupts with more colorful trash talk as he rakes in the massive pot.

Many, if not most, poker players in this scenario would feel that something personal had been at work in this particular loss. There was only one out in the entire deck that could snatch away victory and give it to your enemy. One! A 44-to-1 shot! Maybe you jinxed it, tempted fate with that joking comment about dodging one-outers. Maybe, in a situation like that, it’s hard not to believe that the poker gods were exercising some sort of personal vendetta, determined to make you lose against an obnoxious, much-inferior opponent.

But if you allow yourself to think like this, you’re only looking at a small part of the picture. You’re painting a circle around one bullet hole on the side of a barn. Yes, that king of clubs was a 44-to-1 shot to spike on the river. But the same can be said for any other final card. If the river card had been the

, that also would have been a 44-to-1 shot to get there. Each and every time the river is dealt – every out that rescues you, every card that crushes you, every meaningless brick – that card must overcome long odds to arrive when and where it does. They’re all bullet holes on the side of the barn. You draw a circle around the king of clubs because that’s the bullet that went to your heart. But it’s still just one random hole among a multitude. Nothing personal about it.

Poker players are forever drawing a circle around some random cluster and then declaring it a bullseye. Every time we complain, “I never win coinflips” or “I can never win with this dealer” or “Idiot opponents always suck out on me” – we are just as guilty as the would-be sharpshooter of trying to make a meaningful pattern out of randomness. Objectively, rationally, most of us know these things aren’t true. We don’t always lose coinflips and the morons don’t always suck out. It just feels that way sometimes. But no matter how many coinflips you’ve lost recently, or how important they were, it’s still just a nasty little cluster of arbitrary holes.

Fixate on that narrow bit of data, stand too close to the barn, and you only get a partial, myopic view of what’s really going on. But if you step away, view the building from a distance, the cluster loses its significance. Loses its power to make you feel as though fate has singled you out to be a victim.

The real danger happens when we allow these I’m-so-unlucky beliefs to influence our play. If a poker player is convinced he can never (or almost never) win a race – and then is faced with a borderline decision to shove his chips on a likely coinflip, can he make the correct choice without the wussifying influence of fear? Can the poker player who feels that it’s his special curse to get unlucky against morons continue to play his best game when he finds himself in a hand against one of those overly-fortunate idiots? When the answer is no, losing becomes a self-fulfilling prophecy.

Weak-tightness creeps in, as we don’t get enough value out of our winners, fold hands that would have been winners, and perhaps worst of all, fail to protect hands that should have been winners. What poker player hasn’t ever been guilty of failing to bet or raise enough with a made hand because we were half-convinced the idiot opponent was going to suck out anyway? Fearing a loss, we end up guaranteeing it.

But the Texas Sharpshooter Fallacy isn’t just about the way we view bad luck. We’re often just as guilty of painting a circle around a few chosen bullet holes when the cards are falling in our favor. Belief in good luck is dangerous too. “I always win coinflips” is every bit as fallacious as “I never win coinflips” and just as expensive, if not more so, if even once that belief coaxes you to put your money in bad. Yes, it’s good to have confidence as long as that confidence is rooted in genuine skill. But the poker player who comes to the battle believing he is going to prevail because “I always win with <insert favorite junk hand here>” is asking for trouble.

It’s a matter of perspective. By drawing a virtual circle around a few chosen bits of information – a handful of bad beats here, a lucky break there – we can convince ourselves of almost anything. And like the ersatz sharpshooter, it’s all about making ourselves look better than we really are. Looking back on a tough losing streak, we paint a circle around the bad luck and disregard the bad plays. Or after a big winning session, we paint a circle around the great plays and ignore the hands where we got lucky. It’s soothing , it’s reassuring, and it’s a trap. Every time we do this, we’re shooting ourselves in the foot.

One Response to “The Texas Sharpshooter Fallacy” 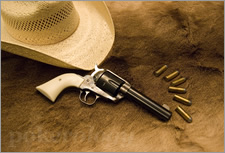 Poker players are forever drawing a circle around some random cluster and then declaring it a bullseye.