Poker and the Sniper Syndrome

I have had the opportunity to coach a player or two who aspire to improving their poker performance. Many times I have used “Poker Posers” in the coaching process. Pokerology forum members should be familiar with my Poker Posers which from time to time I post. For newcomers it is simply a scenario that puts the reader in a situation and then asks the question … what do you do now and why? One of my favorite students who plays low stakes ($2-$4 and $3-$6) limit hold’em seemed to have fallen prey to the fear that he was always up against the stone cold nuts. This fear has been dubbed “The Sniper Syndrome” in the poker literature and for good reason. Some players just get it in their heads that a sniper is behind every tree with the nuts just waiting to pick off their non nut hand. While everyone has certainly been ambushed by a sniper holding the nuts, you cannot play winning poker if you fear there is one behind every tree.

The result of this fear for my student was that he would tend to slow play a strong hand when he should have been value betting and even, worse, folding when he should have been raising or at least calling. Neither of these actions bodes well for winning in limit hold’em. Allow me to share the hold’em poker poser that became a bit of an epiphany for this student and his obsessive fear of the ambush.

The poser that I constructed had my student sitting in the cutoff seat (one seat before the button) holding a suited A-Q. Three players limped in and our hero raised it. The button, both blinds and the first three limpers called, so the seven of them watched a flop of Q-Q-3 placed in the center. Our hero caught one of his suit which, in addition to trip Queens, top kicker, gave him a back door nut flush draw. Both blinds checked and the original limper bet. The next two players folded and our hero made it two bets causing the button and both blinds to fold. However, now the original bettor re-raised. Our hero now finds himself heads-up with the action awaiting his response and the question is posed … “What do you do and why?” The main value of these posers is not to come up with the correct play, as in this case there were only three available options but rather to submit solid analysis as to why you are advocating your choice of action.

Our hero’s analysis focused to just two hands that he felt he was up against which, in his mind, were either A-Q or pocket threes. One could result in a chopped pot and the other would require that he hit the case Queen, an Ace or have another pair appear on the turn and river that did not contain a three. Neither of the hands that he feared made very much sense to me based upon the situation, the previous action and mathematical analysis.

When I critiqued our hero’s answer I indicated he tended to always imagine the worst case scenario, which often was unlikely, and his conclusion tended to freeze him up … the sniper syndrome rears its ugly head. I would think you can guess his response as to how he thought he should proceed. Yes, he thought he should call, fearing he was up against a better hand. I advised him that I believed calling was the best course of action but his analysis was flawed. I believe he should call so as not to alarm his opponent and cause him to shut down on the turn when the bets would double. You would prefer to embolden your opponent so he will lead out on the turn.

What finally convinced our hero that he was a victim of the sniper syndrome was that he had only considered two hands that his opponent could be holding when in all likelihood he held a weaker Queen. He came to realize that the only hand he really had to fear was pocket threes which was a very unlikely holding. With that put into perspective, he realized that in all likelihood his opponent held one of up to twenty (this number would include the three possible chop hands) other hands and probably one with a weaker Queen. It was the mathematical analysis that became his epiphany in putting his opposition on a much broader range of likely hands.

If you on occasion find yourself playing tentatively as a result of fearing the worst due to the sniper syndrome then use the lesson of this poser to take a more mathematical approach to figuring out a range of hands your foe could be holding. Once you get past the worst case scenario, you will come to realize that one of the much broader range of hands is usually more likely. This does not mean that you should never exercise caution when faced with a similar situation. It does mean that if you fear a sniper is behind every tree, it will cause you to miss key bets or worse, allow an opponent to draw out and beat you due to your passiveness. Always remember poker normally rewards initiative and initiative in poker usually translates to aggression! 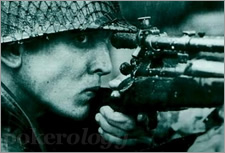 Some players just get it in their heads that a sniper is behind every tree with the nuts just waiting to pick off their non-nut hand.