I meet a lot of people. Some know me from the poker world. Most do not. Those who don’t play poker usually have one of three questions. “When am I going to see you on television”? “Do you bluff much”? and “Do you have a poker face”? Let me quickly answer the first two questions and devote the bulk of this column to answering the last.

I don’t expect I’ll be on television as a poker player any time soon. I am not primarily a tournament player. When I do play major tournaments I tend to play 7-card stud or one of its variants. These are rarely aired on television. So in the unlikely event that I entered one and finished in the final table, there’s very little chance I would be seen.

As to bluffing, it’s an important part of any serious poker player’s arsenal – and it surely is part of mine. But it’s too simplistic to think in terms of bluffing a lot or bluffing little. I mix up my game, as all good players must, by mixing in all types of deception: slowplays, traps, bluffs, semi-bluffs, and even semi-demi-bluffs, when each is appropriate. In some games I use a lot of deception; in other games hardly any. There are many columns I could write about how to use that deception appropriately and well. This column isn’t one of those.

As to having a poker face is concerned, yes I surely have one. The important question is why I have one and what it is.

Let’s start with looking at what a poker face is – and how it’s best used.

One of the first skills that a poker player must learn, if he is to be successful, is to masque his automatic reaction to good and bad hands. So, for example, if a player with

on a board of

appear on the river, though he is naturally elated to be holding a royal straight flush, he must not betray that joy – lest his opponents, recognizing that his expression indicates the true value of his hand, take advantage of that revealed information and fold their lesser hands.

Inversely, just to sharpen the point that is obvious to all but the rank beginner, if instead of hitting the ten of spades on the river, the

pops up, giving our hero absolutely nothing, he would be a poor player indeed if he displayed his sorrow by frowning and shaking his head – as this would surely encourage others to take advantage of his failure by betting into him, knowing that he would surely fold.

Poker players, understanding this, adopt what is known as a “poker face” – an expression that transmits neither joy nor sorrow regardless of what they hold.

This is so universally known among poker players and non-players alike, that hardly any poker players who play for any kind of serious money exhibit a reaction that so obviously communicates his true joy or sorrow (unless he tries to mask his true reaction by doing the opposite of what he thinks betrays his hand – acting weak when he is strong for example – but that’s an article for another day). His responses are, usually, so subtle that he himself doesn’t know that he’s reacting publicly. Most of us learn early on to have, generally, the same expression on our face no matter what our true reaction to our hand.

Some players adopt the somber, grim look of a person engaged in a serious endeavor. They look stern and somber, intimidating and off-putting. Some find it useful to adopt this expression as their “poker face” because they believe that it projects a winning table image. This they do because they believe that it gives them a competitive advantage at their table to be seen as a winning player.

Visit a typical poker room and you are apt to find many guys and women with this expression. “Don’t mess with me” they seem to be saying with their scowl. “I’m a tough poker player.” It is an expression that most people, I would guess, think of as the best expression to have. They want to project to the rest of the poker world, the kind of poker player they themselves would most like to be – tough, serious, no nonsense.

To their credit, this is the standard expression a winning person adopts in other endeavors. If you are a golfer, swimmer, runner, boxer, golfer, or tennis player you learn to look confidant when you compete. There is a certain edge that project the air of a winner gives you in nearly all competitive endeavors.

But poker is very different. Think about this. In poker, where do your profits come from? If you’re like most winning players, you’re not making most of your money from the toughest players in the room. Those are the players who are most likely to take your money. Your profit is coming from the worst players – those who are average or below average – the new, inexperienced, amateurs who aren’t visiting the poker room to make money but to have a good time.

So how do you maximize your profit? You play your best game of course. That practically goes without saying. But when it comes to selecting your opponents, whom would you pick, the tough wizened veterans whom you’re trying to emulate or the novice and rookie players who are just down in the casino to have a good time and gamble it up?

If you’re smart, you’ll look for the rookies and other fish who are more likely to be loose and easy with their money. You want them to play with you. So how best to lure them into your game? With a serious, no nonsense, stern, somber expression? Of course not! You want these helpless souls to feel welcome and relaxed sitting next to you because you wouldn’t hurt a fly. You want them to think that you’re just like they – just there to have a good time, gamble it up, and meet interesting poker players.

Similarly, once a bad player sits down with you, how do you want them to feel once they do so? Do you want them to be intimidated by your serious expression? Do you want to risk having them run away or become so fearful of your terrifying table presence that they shrink into their shell, take no chances, and fold all but their monster hands? Certainly not! You want to make the bad players feel as comfortable as possible sitting down with you. And then when they’re at your table, you want to relax them further by continuing to exhibit the behavior of someone who is playing to amuse himself, not to make money. Given a choice, you want to look clueless, not skillful, playful, and not serious. You want to be the type of player that the bad player will enjoy playing with, even if he’s losing his money.

How do you do that? You become the friendly, playful, happy guy whom this fish won’t be intimidated by. You act in a way that communicates warmth and friendship. If you’re smart, you’ll do what I do. Your poker face will be a smile. 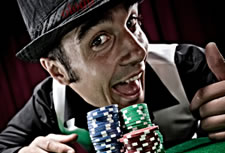 You want to be the type of player that the bad player will enjoy playing with, even if he’s losing his money.