Here’s a hit and run story. I was visiting the poker room in the Desert Diamond Casino in Tucson, Arizona. It was a smoky pit at the time – well before the rigorous anti-smoking rules went into effect. The seven card stud they had was strictly low stakes. The hold’em tables had long lines. I put my name on a list for $10/20 limit hold’em and decided to wait no longer than 30 minutes before heading on to another poker room in town. As I was walking away from the sign up board, I noticed that off in the back of the room there was a table with what looked like mounds of chips in front of each player. I asked the brush what that table was spreading. “$5/10/25 pot limit hold’em” he said. “There’s no list” he added.

The stakes went a bit above my regular game. I played a $1/2 blind pot limit game at home – and I had just started to sit in occasionally in a $5/5 no limit game at Foxwoods Casino in Connecticut. This triple blind game seemed a bit rich for my blood, but I was hungry for action. So I walked over to check out the play and to see if I might stand a chance.

I noticed, in the ten minutes or so that I watched the game, that there were only two poker players who presented any real danger to me. One was excessively wild – raising the pot pre-flop nearly every hand – and then potting it after the flop as well. There was also one very strong, aggressive and selective player, who seemed to know what he was doing. The rest of the players were passive calling stations.

The minimum buy-in was $200, though most players had at least $500 or so in front of them. The wildman had a few thousand, and the solid player to his immediate left had about a grand. I decided that the only way that I would play would be if the perfect seat opened up. I figured that I’d want to see the action of the wild player and the solid player before I acted. So to me, the perfect seat was to the immediate left of the solid player – two to the left of the maniac. If that seat, and only that seat, opened up in the next few minutes, I silently vowed to take it. If not, then I’d drift on to action elsewhere.

Just as I was concluding my mental commitments, as if by act of the poker gods, the perfect seat was vacated and the dealer asked if I’d like to sit in. How could I refuse? I took my seat, bought in for $500 and got ready to play – in the $25 blind.

I would be remiss if I did not mention that I did something else before getting dealt a hand. This being a very smoky casino, I also donned my dual action, charcoal filter gas mask! Lungs protected, $500 in front of me, my big blind of $25 posted, I was ready for a hand. I was dealt 10-3.

True to form, nearly all of the players to my left called my blind. When it got around to the maniac he raised the pot. The solid player to his left called the $200 or so and I folded my garbage.

On my next hand, in the $10 blind spot, the pattern was repeated, except this time the maniac only called, as did the solid player to my right. I looked down and saw

. Normally, in early position, I’d pitch this hand. But seeing as I had already put in 40% of the bet with my $10 blind, and further seeing that I had immense pot odds with 7 other players in for $25, with only the passive big blind able to raise, I called for another $15. The big blind checked and we saw the flop.

, giving me the second nut flush right out of the chute! The solid player was first to act. He bet $150 into the $200 pot. I had $465 in my stack. Not wanting to risk anyone drawing out on me, and nervous from the higher-than-usual stakes of the game, I shoved all in, spilling my stacks across the table as I did so. Everyone folded up until the strong player who made the initial $150 bet. He paused and then looked at me and laughed. He then said, “My daddy always told me that if a man in a gas mask raises you all in – that you should fold!” And so he did.

I raked in the pot.

Just then, the dealer announced that the game was being changed to pot limit Omaha. I didn’t understand. I thought it was a pot limit hold’em game. I pulled down my mask and asked what was going on. The dealer patiently explained that this was a dealer’s choice game – and that games were called for a round. The new dealer wanted to change the game to Omaha – and so it was changed.

If this had happened to me now, I’d have gladly continued to play. I enjoy a good pot limit Omaha game. But this was back seven or eight years ago – when I had hardly played the game. I didn’t think I’d have any edge against these players. And so, having won $350 – a large sum for me back then – I decided to leave after only two hands. As I stacked up my chips and started to leave the table, the strong player to my right said to the table, “Who was that masked man?”

I came; I won a tidy sum; and I left. That’s the nature of a hit and run. You don’t give yourself the opportunity to give back what you win – you leave as soon as you hit a big pot. In this case, it seemed to make sense. I was playing over my head; the game had changed; I was nervous about the stakes and the game. So I had no good reason to stay. But what about at other times?

Some players swear by this strategy – arguing that after a large win, their luck is bound to change and they’ll probably end up giving back their profits to the other players. They argue that this method guarantees that they leave as a winner – even if it keeps them from winning more. They point out that they aren’t greedy – that a few hundred or a few thousand dollars – whatever their initial winning goal is – is enough to satisfy them. So why stay any longer?

I have found both advantages and disadvantages to a hit and run strategy. Let me give them both to you so you can decide whether and how it might work for you.

At first glance, there is little to recommend a hit and run strategy to a winning poker player. For him, over time, every hour spent playing poker should be viewed as an hour earning money. If a player is beating the game consistently, then the longer he plays the more he should win. Winning streaks are not predictable. They are only knowable in hindsight. There is no reason why a rush that results in winning $1,000 will be followed by a loss any more than by more winning. Leaving a game just because you’ve been running hot, and fearing that you’ll now run cold, is superstitious poppycock.

In fact, the opposite tends to be true. If you are beating a game badly – if you have won a lot of money quickly at a table, there’s probably some reason for it other than just luck. The players at your table are probably looser and/or more aggressive than the run-of-the-mill player you’re typically up against. They may not respect your raises as much as some of the tighter or more observant players. Do you really think the most profitable poker strategy would be to leave such a game? Probably not. Probably, all other things being equal, if you are in a great poker game, you’ll do better by staying in it as long as the conditions continue to be favorable. Make hay while the sun shine, as the saying goes. Great poker games are not always available – so make money while you can. When the games are filled with a bunch of rocks you’ll wish you could go back and play a few extra hours when the games were juicy.

But here’s the other side to the story. Though game conditions may in fact be ideal for a long session, you may not be ideal. Though it’s surely true that our goal should be to take advantage of great games like this for as long as they exist – we must have the clarity of introspection to know whether or not we are capable of doing so. Some poker players get very anxious when they are in aggressive, wild, loose games. Though they may be able to play well for a brief while, it may be that being in such games for very long puts them on tilt or otherwise prevents them from playing their best game. It may be that they can only play their best game – being appropriately aggressive for example – for a very short while. If that is the case, they’d be foolish to stick around until their play went off track. They should eliminate the hole in their game by leaving before their bad habit of playing poorly after a while manifests itself.

Other poker players aren’t thrown off by the duration of their session, but rather by their winnings. They play an excellent, well controlled game as long as they are about even or down. But as soon as they are up a few hundred dollars their game goes in the sewer. They start to play more carelessly because, psychologically, they think of their winnings as other people’s money. They continue to play loosely and poorly until they’ve run through their profit and are back down to their own initial stack – when their best game kicks in again. Players like this would benefit from a very short poker session – by hitting and running. They shouldn’t give themselves the time to fall into their sloppy play when they are up – but rather leave – perhaps to return with a new stack and a new determination to win.

Understand this. Though it is interesting to know what the perfect poker player should do to maximize his wins, and though we should all strive to improve ourselves with that as our goal, it is much more important to know what your weaknesses are and how to adjust your playing habits accordingly. So while the ideal poker player will not need to hit and run – always staying as long as the poker game is good – there are some types of players who could profit from the short spurts of play characterized by a hit and run strategy. These players would be well advised to work on correcting this imperfection in their play – that causes them to go on tilt or otherwise play worse after winning. But until they do, they can maximize their ability to win by leaving sooner rather than later. 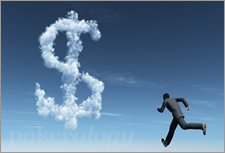 This being a very smoky casino, I also donned my dual action, charcoal filter gas mask!