How to Play Poker in the Star Trek Universe

SPOCK: A very interesting game, this poker.
KIRK: It does have advantages over chess.
MCCOY: Love to teach it to you.
Star Trek, “The Corbomite Maneuver”.

For those of our gentle readers who are not card-carrying nerds, the new Star Trek movie premieres in the US on May 8. For those that are, I’m sure you have that “stardate” etched into your brains with a hand phaser by now.

But what does an ancient Earth card game have to do with TV shows about starships and aliens?

Many players say that poker reveals more of a player’s character than any other game. What does it reveal about the characters in the fictional worlds of the 24th century?

In the episode quoted above, Spock claimed not to be familiar with the game. However, since most Vulcans are portrayed as being highly intelligent, we can assume that they could pick up the mathematical components of poker fairly easily. Their staunch adherence to logic would make them good “ABC” players who only play solid starting hands. Such solid play would also be their weakness, since the fact that they only play strong hands would make them very easy to read. Also, since they would almost never get involved in a hand while holding bad cards, they would never bluff and never call a bluff without the nuts. Players that love to make aggressive raises and re-raises would run most Vulcans out of their hands.

If there’s a polar opposite to the Vulcans, it’s the Klingons. Klingons thrive on combat and aggression. Where Vulcans are quiet and contemplative, Klingons are loud and obnoxious. If you fold to a Klingon’s raise, you’re a coward. If you call, be ready for a fight. If you re-raise, he might jump over the poker table and stab you for insulting him. There is no word in the Klingon language for “fold”; count on a Klingon to call down every bet you make. He may even raise you just to test out your courage. Put a bad beat on a Klingon and he’ll put one on you – by shoving you out an airlock and into space!

Falling somewhere between the Vulcans and the Klingons come the other major enemy of the Federation, the Romulans. While they are related to the Vulcans, the Romulans have replaced calm and logic with paranoia and deviousness. They enjoy showing off their superiority by setting traps and watching the stupid humans and clumsy Klingons become ensnared. They love to slowplay big poker hands and lower the boom on their “inferior” opponents by pushing them all-in on the river. A typical Romulan player believes he’s the best at the poker table: whether he truly is or not is irrelevant to him.

On Star Trek: Deep Space Nine, the Ferengi Quark runs a casino and sports book on the space station, but never gambles himself. For a species that prides itself on profit and acquisition, the Ferengi are exceptionally poor poker players. They see any loss of revenue as a mortal blow; so short-stack situations are extremely stressful for them. To avoid losing both profit and status, they will resort to any form of cheating available. Watch for them to mark cards or steal chips from live tables, or try to alter the software of online poker clients. (Are we sure Russ Hamilton isn’t part Ferengi?)

Put away your designer sunglasses, hooded sweatshirts and iPods if you play with a Betazoid; none of it will do you any good in hiding your emotions. Who needs to see your eyes when Betazoids can read your mind? Even half-blooded Betazoids like Counselor Deanna Troi on Star Trek: The Next Generation can read emotions as easily as you’re reading these words. One way to combat this advantage is to play your hand without looking at your cards. Mind readers can’t read what’s not there, right?

A Cardassian player combines the worst aspects of the Klingons and Vulcans. Due to his militaristic background and blind obedience to his superiors, he lacks the imagination to make great poker plays. Add a short temper and an overwhelming superiority complex, he becomes like a bad Phil Hellmuth impersonation, only without the talent. He wants to be sneaky like a Romulan or brave like a Klingon; he just doesn’t know how. He’ll chase weak draws like a dog chasing cars, only to get his stack flattened when he misses. His sole advantage is his photographic memory, so he’ll be able to recall how each player played each hand on each street with perfect clarity.

The most dangerous species at the poker table is, of course, the one who invented the game in the first place. To be a successful poker player truly requires the best qualities of all these races. Don’t let the shiny starships and velour Starfleet uniforms fool you; humans are the toughest players in the galaxy. Humans have shown that they can be as devious as any Romulan and as greedy as a Ferengi Grand Nagus. The most notable human players often combine the logical analysis of a Vulcan with the out-and-out bravery of the finest Klingon warrior. Some of them can read their opponents as if they had Betazoid mind reading powers and possess the total recall of the best-trained Cardassian spies.

While you may not run into any players with pointed ears, bumpy foreheads or sharpened teeth, you can always learn to recognize these traits in your all-too-human opponents. Keep cool like Capt. James T. Kirk at the tables, and Live Long and Prosper!

Author’s Note: Special thanks to Memory Alpha for all the Star Trek culture-related information. See you at the movie! 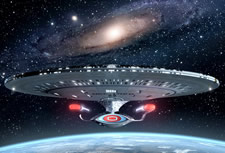 For a species that prides itself on profit and acquisition, the Ferengi are exceptionally poor poker players.