Sizing up a Poker Game

I have a friend, Andre, who is relatively new to the world of competitive poker. He and I spend many hours online and in person talking about the game. Recently, our conversation centered on how he thought he had improved – and which of his improvements contributed most to his bottom line.

Without a doubt, he concluded, his biggest edge came from his improved ability to pick a good game and to adjust his play to those he was facing. When we discussed the matter in more detail, it was clear to me that the many items we talked about would make a good subject for an article on this site.

It was once said of legendary poker player and poker room manager, Eric Drache, that though he was probably the eighth best poker player in the world, he had the poor judgment of only playing against the other top seven players! How true this is of many poker players – if not to the extreme degree of Mr. Drache then at least to the extent that players frequently join games that they cannot beat even when there are profitable games available.

Know this with certainty: in the long run, the profit a good player extracts from any poker game is not the product of how good he is in general but rather how good he plays relative to the other players at his table. Some may disagree, arguing that it is hardest to win against a table full of poker players who don’t know what they’re doing. Those people are wrong. On average, the lower the level of play at your table, the better for you in the long run.

Of course the best way of assuring yourself of playing with bad players and avoiding good players is to recognize players whom you have pegged in the past as bad or good, and sit down in games with many of the former and few of the latter. Often, however, especially for players who play in public poker rooms with many different games and a large supply of transient players, or when you’re the traveler, you won’t know many of the players at the table. In those games it helps to recognize some public clues to the quality of the game. The two lists below identify those clues and why they are useful.

You want a poker game with the following ingredients:

Laughter and good cheer all around

Laughing, smiling, and happy people tend to play a more social, less competitive game. This is good for you. You want players who aren’t chiefly at the game as part of their job or serious hobby. You want players who take poker lightly – as a fun way of gambling rather than as a serious way of making money. You will be more likely to get paid off when you make good hands. And you’ll be less likely to face aggressive play every time your opponents think they have the advantage.

Alcohol helps many people become the laughing, smiling, happy people you seek. Alcohol reduces inhibitions, dulls attentiveness, and generally lubricates the natural desire to gamble and have fun. People who have their judgment clouded and their emotions closer to the surface are easier to exploit for many reasons. They are less likely to be fully attentive and easier to manipulate. They’re also more likely to go on tilt. Similarly, since serious, professional, and otherwise competitive poker players tend to eschew drinking at the table, if you see a table with a lot of drinkers you’re less likely to face the most serious students of the game. A caution about this. I am suggesting you seek out games with slightly inebriated opponents – not with full fledged drunks. Drunks play horribly of course, but they also tend to slow the game to such a degree that you may not be able to stand the pace.

You want to play against gamblers, not against serious poker players who only bet when they think they have the advantage or a sure thing. Poker playing gamblers sometimes exhibit their gambling nature by playing other games while playing poker. Keno slips, racing forms, and discarded scratch tickets are the detritus of such activities. If they participate in those forms of gambling, chances are that their poker play also has a good deal of gamble in it. That’s good for you.

Lots of calling and checking

Good players usually raise or fold. Of course there are times when a call or a check is the correct play. Even so, your profit will tend to come from those players who make the mistake of calling and checking too frequently and folding or raising too infrequently. All you need to do is watch a game for four or five hands and you’ll see what type of a game you’ll be in if you sit down. Go for the game with the most passive and loose players and you’re more likely to make a profit.

Many players in the hand as it progresses.

The more players who tend to stay in the hand as it progresses towards the final betting round, the more players there will tend to be to make money from when you end up with the best hand. Since you, as a good player, will be taking into consideration the quality of your hand, as well as the pot odds and implied odds of your hand and the likely hands of your opponents, you’ll stand to win more than your share of those large pots, while risking less than your share in the process. This will be more profitable for you in the long run than heads up games or very short-handed opposition.

You want to avoid games with the following:

Sure, there are many players who act serious but who can’t play a lick. Even so, given a choice, stay away from the guys with the crossed arms and the scowl. They’re taking the game seriously – and you want opponents who are there to gamble. Silence generally means that players are thinking about what’s going on and what action they are going to take. That’s not what you want. You want light-hearted, thoughtless, emotional players who aren’t paying close attention to the game.

Yeah, I know there are a lot of pretenders who are just playing dress up. Sure you can beat them too. But this “poker attire” indicates at least an attempt to be taken seriously – meaning they’re at least trying to play well. Given a choice, I’d rather fight with folks that haven’t got a clue.

Neat stacks of chips and a careful demeanor.

A neat stack tends to indicate a tight player. True, tight players can be exploited as well. But I will make more money from those players with a more casual and careless attitude about their chips – and their money.

Games with lots of raising and folding.

Good players fold and raise much more frequently than they call or check. While an expert poker player can surely exploit aggression and tightness as well as looseness and passivity, average or good players will surely win less money against the aggressive and tight player than against the loose calling station. So avoid the tight-aggressive players if you can.

Games with many heads up or conceded pots.

Some of you may think that it’s tougher to win money, in the long run, in games with many calling stations. You are mistaken. I’ve run the simulations on the Wilson software for hold’em, Omaha, and 7-card stud. In all cases, over the long run, the tight aggressive good player wins more money when he plays in the games with the most passive and loose opponents. In general, there is no question but that for the good player, a bad game is a tight game and a good game is a loose game. Games that are conceded before the river and games that tend to be heads up after the flop are games to avoid.

All of the advice of which games to seek out or avoid is general advice of course. As you become a better player you’ll learn the skills necessary to take advantage of every type of player and every type of game. But when you’re deciding where to play, given a choice, why choose the tougher type of game? Find the games with lots of light-hearted, light-headed, happy, loose, gambling calling stations while avoiding the games with the serious, quiet, neat, and tight players and you will have the best chance of making the most from your poker playing session. 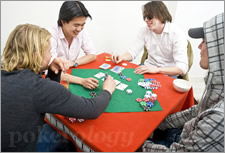 Laughing, smiling, and happy people tend to play a more social, less competitive game. This is good for you.