We poker players tend to want to present poker as a sport more than as a game. We point out how much skill is a factor – and how little luck plays a part in the long run. We enjoy the television coverage that focuses on the poker strategy and insight of the best players. And we see the overall success of the top poker pros as the product of their superior abilities not their superior luck.

Take a look at the coverage of poker tournaments in magazines or websites. You’ll see the language and metaphors of a sport. When a player succeeds in these events, rarely will it be that they ”luck out” over their opponents, or have “good fortune smile on them”. Rather, our poker champions “crush”, “win”, “destroy” and “outplay” their opponents. Poker is drawn as a mighty and skillful contest, not a fun and luck-filled game.

This being the case, it is ironic that one of the greatest truisms of the sporting world is absolutely wrong when it comes to poker. I refer to the sports cliché “Quitters never win; and winners never quit”. Generally, it is a useful aphorism in the sporting world – directing athletes to persevere through losses, frustrations, and difficult competition. But in poker it is dead wrong.

In poker, winners must learn to quit in four circumstances: quitting on the hand, quitting on the table, quitting on the session, and quitting the game of poker entirely. Not only is there no shame in quitting – as I’ll explain below, it’s an essential part becoming an overall poker winner.

Quitting on the Poker Hand

in a $1/2 no limit hold’em game. You’re in late position. Everyone has $400 or so. Someone in mid position raises to $10. There’s a caller. You decide not to slow play your strong hand. You raise to $30. The raiser and the caller both call you. They don’t seem to be especially tough or poor players. You figure they’re holding something at least moderately strong – a big Ace, high suited connectors, or a medium to high pair.

Well, if you were to follow the old adage of never quitting, you’d either call or raise – refusing to give up on this hand no matter how thin your chances of winning. You might rationalize a shove here on the grounds that the first player might be betting a drawing hand and the second player might be trying to knock him off with a semi-bluff raise. Your shove, you might conclude, would be just the medicine to take the pot from both of them. Quitters never win and winners never quit – and all that.

But you’d be wrong. Absent a good read on both of the players, you’d just be on a kamikaze mission. Chances are that at least one of them is far ahead of you with a pair of Aces. If that’s the case you’re crushed. There’s also a good chance that one of them either has a set or a flush – in which case you’re super-crushed. Your only chance of being ahead of both is if both are seriously overplaying their hands – a very unlikely event given your initial read of the hand. Fold this dog and wait for a better opportunity.

Don’t let your competitive spirit and eagerness to play sabotage your better judgment. When you estimate that you’re probably way behind in a hand on the flop, even if you started out ahead before the flop, you should quit the hand.

You scoped out the game as you’re supposed to. The one you eventually sat in was soft – with three donors and only a couple of strong players. Sure enough, you busted one of the weakies within your first five hands. You doubled up and he left. The other two donks got the treatment from one of the other strong players. Two more tough players took the place of the donks. And a third player whom you’d seen around the $2/5 table took the third vacant seat. After two hours, instead of swimming with the fishes you were scurrying away from the sharks. You think you might be able to hold your own against them, no matter how tough they are, but the game has gone south in a hurry. What do you do?

Part of you wants to prove yourself against these pros and semi-pros. What are you, after all, chopped liver!? How will you ever get better and groomed for the tougher games at higher stakes if you don’t hold your ground against the best of the lowest stakes no limit players? Quitters never win and all that.

Forget it. Look around. If there’s a game that looks juicier, take it. The profit you earn comes at the expense of players who are worse than you, not players who are as good or better. Perhaps the most important skill you can develop is game selection. Work on your poker education among better players when there’s no alternative or at the same time you’re cleaning up from the rubes. There’s no award for losing the least in the toughest game among the best poker players. Quit the table. Play elsewhere before you give back what you’ve worked so hard to earn from the bad players.

You’ve played seven hours. It’s 5:00 a.m. and you’ve been here since 10:00 p.m. You’ve hit some second best hands and been rivered a few times. You’re stuck a thousand in this $1/2 no limit game. It’s been tougher than you thought and there are no tables that look easier. You’re starting to blink a lot and yawn. A fish is to your left and he keeps outdrawing you. His stack gets engorged with your money and then it shifts to the semi-pro to his left. You figure your luck is bound to turn. You just want to get to even so you can leave. You’ve been repeating that to yourself for the past three hours – but your luck isn’t turning. And damn, you’re tired. What do you do?

You know you don’t want to leave. Winners never quit and you’re a winner goddamn it! You’re not going to give that fish the satisfaction of kicking your butt out of there. But damn you’re tired.

Forget it. You’re shot for the night. It’s one big game. Quit. Go home. Get some rest. Come back armed with more stamina and your best, clear-eyed and awake judgment.

Quitting the Game of Poker

You’ve been playing poker for two years now. All of your friends got you into it. You played in home tournaments. You lost a little every couple of weeks. You never could follow the action and remember who bet when. Still, you liked their company and you didn’t mind the game. You even read some of the poker books your better playing friends recommended. You didn’t really get it, but felt that you owed it to yourself to keep studying and applying what you learned until you got better. It always worked in college and grad school. You eventually mastered even the toughest subjects.

Now you cringe a little when you’re asked to go to the nearby poker room with your buddy who is a semi-pro. You know he loves it – and you really like him. Still you are just not into the game. Do you stick it out, keep applying yourself and try to figure out this game that has fascinated so many for so long? You see yourself as a winning person – you don’t give in easily. And you’re smart. How hard can poker be? What do you do?

There’s no shame in calling it quits as a poker player. If the game doesn’t give you pleasure and if you haven’t been able to master it, there are many other productive ways you could be spending your time. There’s no intrinsic reason to become good at poker. If it’s not making you happy and if you’re not making money at it, then quit. Take up something that suits you better. Why waste time and money trying to make a go of it as a winning player if you could be doing something you enjoy more or have more natural ability in. Quit the game – with a smile. You can be a loser at poker but a winner in something else.

The bottom line is that in poker, unlike in other sporting activities, your success depends in large degree on knowing when to quit – and why quitting is important. Without understanding that basic part of the game you are doomed to lose. 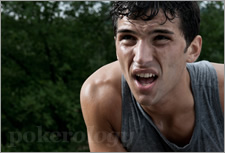 There’s no award for losing the least in the toughest game among the best poker players. Quit the table.