Talk to a friend or acquaintance who doesn’t play poker. Ask him about what he thinks are the two or three most important things to learn about the game of poker. I am willing to bet that he mentions either bluffing or “tells” – those things that players unconsciously do that tend to give away the true strength of their hand. Think I’m wrong?

I’ve dealt with bluffing in other articles – and I’ll deal with it again, but not here, except to say that, in general, for most low and medium limit players, winning poker play depends much less on bluffing than most people think.

Similarly, I think the public, and many poker players, tend to greatly overestimate the importance of finding those unconscious poker tells that tend to give away the true strength of an opponents hand. Let me explain how that is so – and in so doing help you focus on what really is important in figuring out your opponents’ hands.

There surely are things that poker players do, unconsciously, that tend to give away their hands. New players and awful amateurs may smile when they like the way their hand looks and they may curse when they don’t like their hand. Some complete newbies show their emotion on their face obviously and directly. These are poker tells that can be exploited to be sure.

However, players that are so obvious are relatively rare in a poker room or even in a regular home game. Just about everyone who is playing poker for any kind of money knows the importance of not giving away ones hand in this obvious manner. And few do. I’ve learned that one of the most common skills that players pick up is keeping a poker face.

Even so, many players, especially players who have read a poker book or two and who think themselves serious, expend a lot of energy trying to discern the true strength of their opponents’ hands by watching diligently for what I call that giveaway tell. You know what I mean – the ring twirling to indicate a bluff, the lip licking to demonstrate strength, the unconscious tapping on the table when impatient because of bad cards.

Without ruling out some thin possibility of importance in these types of unconscious behaviors, for the most part they are the stuff better left to movies. More important in the low and medium games that most of us frequent are the conscious things that players do when they play poker. Put players into broad categories that define their style of play and you’ll be much better able to define the true strength of their hand than by relying on any of their unconscious behavior.

Here’s an analogy. During WWII, the British were trained to spot enemy planes when they were flying over their coast line. They were trained to identify not only that a plane was overhead but what type of plane. They did this not by learning all of the intricate markings and other fine features of the planes but by learning their basic silhouette. This outline of the plane was sufficient for the good plane spotter to identify the make and model of the plane – and to use that information to alert others.

In poker it’s the same way. The unconscious tells are the fine details of the plane. They are, for the most part a distraction. You can stare for hours at a poker player and get no useful information about what he is likely to hold. In fact, new, beginning, and intermediate poker players often don’t know for themselves the true strength of their hand. How are you going to figure out what they have when they don’t really know?

When you’ve mastered this – and can not only categorize players but remember into which category they fall, then you’re ready for the next step – discerning whether they are tricky or not. There is more gray in this exercise than in the other. Players tend to fall on a continuum that ranges between extremely tricky and completely straightforward. You need to categorize them as being somewhere on the scale and then credit their actions accordingly. If a very straightforward tight-aggressive player raises the big blind pre-flop from early position, credit him with a large pair. If, on the other hand, you’ve determined that he’s a very tricky poker player, then broaden the range of hands he might be holding to include two big cards or a suited Ace. Similarly, if a straightforward player bets on the river, tend to believe that his bet represents a hand that he thinks is in the lead. If a tricky player makes that same play, figure that he may be bluffing.

Tight, aggressive, passive, loose, and tricky – these are the simple traits that you should observe and recall at the poker table. That’s enough for now. If you are able to do that with your opponents and then remember the information you’ll be much better off than by focusing your attention on the small and unconscious things that they do.

When you have mastered your ability to characterize players based on their patterns and habits of betting then, and only then, should you move on to the next step – the learning of some of the basic poker tells that many players exhibit. But that’s a lesson for another day. 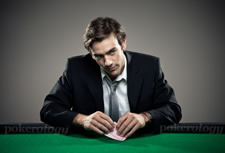 You can stare for hours at a poker player and get no useful information about what he is likely to hold.