Whether you play poker for a living as a means of extra income, or as a passionate hobby, one of the greatest things about being a poker player is the chance to be your own boss. While you’re at the poker table nobody tells you how to play your hands or how to manage your money. It’s all on you. But the freedom that comes from being your own poker boss also carries with it a great deal of responsibility. The ultimate welfare of your poker enterprise rests on you and you alone. And one of the most critical decisions you will ever have to make as your own boss is when – or if – to give yourself a “promotion” to the higher-limit games.

In a world based on hierarchy, it’s only natural that we should want to play poker at the highest possible limits. Bigger stakes offer more prestige, a greater challenge, and most of all, the promise of more money to be won. That is, if you’re truly ready to take on the new job. In the corporate world, promotions are based on job performance, or at least they’re supposed to be. Do well at your current assignment, and you’ll be rewarded with the chance to move up a rung or two on the corporate ladder.

Theoretically, poker promotions should work the same way. If you’re crushing the game at your current limit – and have been doing so long enough that you know it’s not just a statistical fluke – then you should be ready to move up in the poker pecking order. But the situation is rarely that clear-cut. Because you’re acting as the boss, it’s your responsibility to give this employee an objective “performance review” before granting the promotion to higher stakes. But as the employee, it’s virtually impossible for you to be objective.

In the corporate world, the practice of continually promoting employees who have performed well has led to a phenomenon known as the Peter Principle. Taken from the book of the same name by Laurence J. Peter and Raymond Hull, the Peter Principle states that employees who are steadily promoted for doing well at their previous job will inevitably get promoted to a level where they cease to be effective, their “level of incompetence.” And that is where they remain. They don’t get demoted for being incompetent but simply stay where they are, out of their depth, becoming dead weight. The company carries on, but now all of the constructive work is being achieved by employees who have not yet been promoted to their level of incompetence.

Can the same idea apply to poker players pushing their way up through the limits? Is there a “Poker Peter Principle” where players keep promoting themselves to higher and higher stakes until they finally reach a “level of incompetence” where they don’t leave? Well, no and yes. No, because poker has its own built-in automatic demotion system. Any poker player who is playing over his head is doomed to go bust. It’s only a matter of time. But the answer is also yes because that time can be dragged out interminably. Any player who is stubborn enough and determined enough can beg, borrow, even steal the money he needs to keep playing poker at the higher limit for an almost indefinite period – during which time he’ll take a nasty pounding, both financially and emotionally. Poker players who are too quick to promote themselves, too eager to earn that higher BB-per-hour salary, risk putting themselves on a collision course with the Poker Peter Principle.

But there can also be a danger in promoting yourself too slowly. Stay too long at the lower-limit poker games and all the challenge goes out of the experience. This complex and glorious game can turn into the equivalent of a monotonous assembly-line job, the kind where you just sit for hours tightening the same bolt over and over and over again. You’ve learned how to do it to the point where you could almost do it in your sleep. And you’re drawing a steady paycheck, which is no small thing for a lot of players. But you’re not challenging yourself, you’re probably not learning anything new about the game, and you’re certainly not earning as much money as you could. You’re the essence of untapped potential.

It can be very tricky to find that middle ground between the drudgery of never promoting yourself to a new poker game and the financial burnout of putting yourself on the too-fast track. Aside from the poker bankroll requirements, which we’ll get to in a moment, a good place to start is by asking yourself why you play poker – and why you play at a particular limit. Are you craving loftier limits for the sake of prestige, e.g. because you want the “job title” of a high-stakes poker player? Do you want to get away from the call-happy low-level players who never respect your raises and always seem to find some way to suck out on you? Or is it because you’re already learned all you can about the game at your current level and you’re ready for the new challenges, not to mention the more lucrative profits, that the higher-stakes games can offer?

On the flip side, are you staying put at your current level of play because you are genuinely comfortable and happy playing poker at this limit? Or are you denying yourself a poker promotion out of fear? Higher stakes go hand-in-hand with greater risk and some players just naturally have a lower risk tolerance than others. We all know from painful experience how brutal a losing streak can be and you must be prepared, both emotionally and financially, to withstand a big negative swing at your new limit. Financially, that means respect for the tyranny of minimum bankroll requirements. For limit games, that means you should have at least 300 times the big bet. For no-limit the recommendations are a bit more varied, but at a bare minimum you need at least 20 buy-ins and should probably have closer to 30 or even 40 buy-ins as you move up through the higher limits.

Even if you have the right bankroll, and even if you’ve racked up an impressive win rate over the course of at least 20,000 hands, that doesn’t automatically mean you are primed for a promotion. Different levels of play require different poker skill sets – especially if you’re graduating from limit to no-limit. Even if all you’re doing is nudging yourself up one level, you can easily find yourself playing against a different class of opponents. It’s a challenge to be sure, in the best possible sense.

But just as the low-level employee promoted to a managerial position needs to develop new skills, so too must the neophyte high-stakes poker player learn to think about the game in fresh ways. Perhaps we could take a page from the corporate book and adopt a poker “training program” for ourselves. By studying the higher-limit poker games and taking occasional “shots” at the bigger stakes before moving up permanently, we may be able to assure ourselves of a much smoother transition as we progress up the poker ladder. 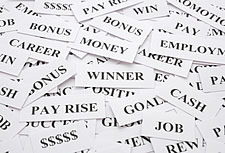