Of all the ways we sabotage ourselves at the poker table few are more pervasive, and ultimately more costly, than impatience. It can seep into every aspect of our game, impact almost every decision we make, without us even realizing it. Like an expert pickpocket, impatience can whisk away our money and even after we know the money is gone, we still can’t figure out who was responsible for the loss. From the starting hands that we play, to the way we deal with borderline decisions, to the basic decision of whether or not to play at all, the inability to wait is killing us at the poker table.

We live in a world of instant gratification. We want instant meals, so we stuff ourselves with fast food and junk food. Then we want a fad diet or magic pill to immediately get rid of the inconvenient weight gain and other physical problems that follow. From cell phones to pocket computers to the Twittering craze, the modern world has wired us — both literally and figuratively — to do, say, and get whatever we want, whenever we want it. But ever since the Donner Party decided that it would be a good idea to shave a little time off their trip to California by taking a quick shortcut through the mountains, the American penchant for more-sooner-faster has been getting us into trouble. And while Americans didn’t invent the concept of instant gratification, we sure seem to have perfected it.

As most of us know only too well, a live poker session can turn into a repetitive marathon of folding that would tempt even the most patient player into making a loose call. But winning poker is about being selective. Wading through all the garbage cards, missed flops, poor positions, and just all-out bad situations until the moment is right to pounce. If we want to win, that’s what we must do, and any poker player with even a modicum of training knows this. So why is it that so many of us, including even the top pros, can have so much difficulty putting this knowledge into practice at the poker table? Why is it so hard to wait?

The online poker card rooms have done their part to help us make an end run around this problem. Cyberspace has introduced the poker world to multi-tabling, turbo tournaments, and the latest antidote to the waiting game, Rush Poker. And there’s no question that for the majority of players these things can help. But at best these “quick fixes” are still only a partial solution, something to take the edge off the inevitable boredom that comes with playing a selective game. At the core of skilled poker play is the ability to say “No.” To out-of-position calls and I-just-wanna-see-a-flop calls, to playing when we’re tired or on tilt – the winning player must be willing to say nay.

At worst, cyber-hyper-poker can lull us into a false sense of security, making us believe that patience is no longer something we need to cultivate in our game. If we’re not careful, we can click ourselves into believing that it’s actually possible to win at poker by saying “Yes” all the time. And it’s not.

While the temptation to play too many hands is the most obvious way that impatience corrupts our game, it’s not the only way. Right-now-itis can also coax us into playing the game when we know perfectly well that we shouldn’t be going anywhere near a poker table, whether it’s because we’re tired, mentally stressed, or just plain sick. But we go ahead and play anyway, for no other reason than we don’t want to wait. And on a related note, impatience can also lead us to keep playing on tilt, even when we know without a doubt that we should really get up and quit. Either way it’s the same stupid deal — the desire to play now is more powerful than the desire to play well.

And when we are faced with the inevitable borderline decision at the poker table, impatience can cost us there too. In a borderline situation, of course we should take a moment and think before committing to action. Reviewing the play of the hand, calculating the pot odds – all this and more should be running through our minds any time that we are faced with a difficult decision. But realistically how often do we do this, even when the stakes are high? Rather than do all that tedious mental homework, it’s just so much easier to go with a first impulse, a “gut instinct.” And while it’s certainly true that many of the great poker players in history have earned tremendous fame and fortune by trusting their gut instincts, it’s also true that only a tiny sliver of a fraction of the rest of us can even begin to aspire to that level of poker talent.

For the rest of us mere mortals, we must learn to be patient. It seems almost counter-intuitive that patience – the will to not act – should be so necessary to win an action-oriented game. After all, “You’ve gotta be out of it to win it” just doesn’t have quite the same ring. But it’s true nonetheless. To illustrate the connection between patience and success, let’s leave the world of poker for a moment and look at the famous “marshmallow experiment” performed at Stanford University in the 1960s. Psychologist Walter Mischel took a group of four-year-old children and, one by one, offered them a marshmallow. The deal was, they could choose to eat the marshmallow right away, or if they just waited a few minutes until the examiner came back from an errand, they would get two marshmallows to eat.

What makes the study so fascinating is that Mischel was able to follow-up and revisit these same children 18 years later. And it turned out that the “grabbers” —the children who gobbled down the first marshmallow before the examiner returned – scored an average of 210 points lower on their SAT scores than the children who were able to wait for the second marshmallow. The simple question of whether or not a four-year-old could wait a few minutes before eating a treat turned out to be a better predictor of future SAT scores than IQ, economic status, or the parents’ level of education. The “delayers” also turned out to be better-adjusted and more dependable overall.

Who’d guess that a simple thing like the ability to wait a few minutes could be such a powerful predictor of future success? But the next time you’re at a poker table and faced with the decision of playing now or playing well, it’s something to keep in mind. 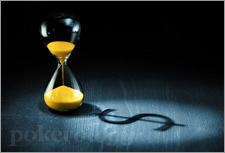 Right-now-itis can also coax us into playing the game when we know perfectly well that we shouldn't be going anywhere near a poker table.