With Tiger Woods’ comeback win at Bay Hill, Paul Casey’s playoff victory at the Shell Houston Open and the start of the Masters coming this week, the tournament golf season is in (pun intended) full swing. What does golf have to do with poker? More than you might think.

Many top poker pros love to take their games from the green felt to the green fairways. Poker legend Doyle Brunson is an avid and talented golfer, even at the age of 76. Recent Poker Hall of Fame inductee Dewey Tomko once made his living as a golf “hustler”. World Series of Poker Player of the Year Erick Lindgren once played four rounds of golf during one of the hottest days of the year – and shot under a hundred each round!

Of course, the poker action around the golf course isn’t limited to big-name, big-dollar Vegas pros. Almost every country club and golf facility has a “backroom” game, sometimes in violation of official club rules. Doctors, lawyers and businessmen gather at the table after their round while caddies and servers go all-in with their tip money.

Aside from the obvious gambling connections, poker and golf share many of the same criteria for success. Whether you’re a scratch player, a high-handicap duffer or have no experience on the links beyond your local putt-putt course, you’ll soon notice the similarities between making ship shots and growing short stacks.

During a golf tournament, players walk up to five miles and make seventy to eighty shots per round each day for four days. Most people may not think that poker tournaments call for that same level in terms of a physically demanding activity. However, many players, especially veteran players in their forties and beyond, subscribe to a fitness program. Most major poker events require players to stay alert for twelve to sixteen hours a day for four or five days straight. The level of stress players experience during the critical stages of a no-limit tournament can match anything you may see on the eighteenth green at the US Open.

By now, most people acknowledge the links between physical stress and mental fatigue. Each affects the other, either positively or negatively, in an ever-building cycle. The way that you emotionally handle a golf shot that finds the rough, sticks deep in a bunker or rolls into a water hazard will give the other players a strong indication of how you’ll take a bad beat or getting your brilliant bluff picked off. Golfers call it “getting up and down”; the ability to bound back from a bad shot and save par. Even Tiger hits his ball into the high grass sometimes – his ability to put himself in a position to win from there is what makes him great. Poker pros need that same ability to prevent “tilt” and get back into contention after the worst happens.

“A Hard Way to Make an Easy Living”

At some point, every public links player or country club weekender imagines teeing up at Pebble Beach or St. Andrews against Mickelson, Garcia or Singh. Likewise, every poker home game hero or local cardroom regular dreams of matching chips and wits with Negreanu, Ferguson or Ivey. They dream of the big prize money, the TV exposure and the endorsement deals.

In both cases, the reality is much harsher. For every big money tournament winner, hundreds of players come up short. Unless a player reaches an elite level, they often have to pay their expenses out of their own pocket. With the travel involved in the tournament circuits, be it the PGA Tour, the Nationwide Tour, the World Series of Poker Circuit, the World Poker Tour or any of the other international tours), a player often has to play multiple days just to make the cut and see any money at all. Even if they reach the money, they still need to have a strong finish to cover both their travel expenses as well as their household bills. This financial inconsistency can carry over to affect the player’s decisions during the game. Do I lay up for an easy par or go for the birdie? Do I call all-in with pocket queens and try to double up, or fold my way into the money? One bad shot, bad call or bad beat can impact a player’s future far beyond that moment. Just ask Sean O’Hair about the sixteenth hole at Bay Hill.

In addition to the costs of equipment, club memberships and greens fees, many golfers spend even more money on books, videos and private lessons. Golf instruction has become an industry that rivals that of the game itself. With the explosive growth in poker’s popularity in recent years, a cottage industry in poker instruction has sprung into being. Almost every major pro poker player has authored at least one poker book. Phil Gordon, Howard Lederer and Phil Hellmuth have each produced their own instructional videos. Hellmuth and Daniel Negreanu each have created a series of web-based video lessons detailing their recommended methods. Poker “boot camps” such as the WSOP Academy and the WPT Academy offer live teaching sessions with past champions. This unprecedented abundance of educational resources (such as Pokerology.com) has helped new players not only improve their skill levels, but allowed them to do so in a way that saves them both time and money.

According to poker author Mike Caro, the object of the game is to make the correct decisions given the limited information available. If you call an all-in bet preflop with pocket kings and your opponent turns over pocket aces, was that a bad decision, or just bad luck? If you slice your tee shot, the ball hits a tree and bounces onto the fairway, was that a great shot or a lucky one? While the results of fluctuating probabilities (better known as “luck”) are more evident in poker, such variances can also occur on the course. Whether you have to decide between short irons or bet sizes, the best choices often lead to the best results, regardless of four-leaf clovers or lucky socks.

So the next time you’re playing in a foursome, watch your playing partners’ styles. Does the big bruiser with the Big Bertha driver like to bet big and bully the table? Does the player with a tricky bunker shot treat it like it’s a tap-in putt? Do you hear a string of curses from the woods as one player tries to find his ball? File these tidbits away and remember them when you get to the clubhouse. Even if you can’t beat them on the greens, you can still take them at the table. 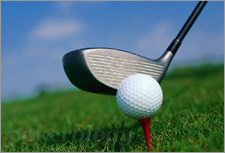 One bad shot, bad call or bad beat can impact a player’s future far beyond that moment.