Good players need to adjust their play to suit different game conditions. I’d like to focus on one particular type of obstacle that you might face in a typical low limit no limit game (a game with no more than $1 and $2 blinds and a $300 or lower buy-in).

In most of these games, a good solid strategy of tight and aggressive play generally is rewarded with a profit. I’m not going to address the basics of that play. Rather I’d like to have you think about what adjustments should be made for playing against what I’m calling a “wild man”.

This is not your typical low limit poker player. He’s not the solid, slightly timid soul whom you’ve learned to beat – the guy with the limited poker bankroll who typically raises only with premium cards in good position – and then to $7 or $10.

Nor is this the clueless poker player who calls along as if he is compelled to do so. This is not the guy you can exploit by value betting, expecting that he’ll call you down with the second best hand. I’m not writing about him either.

This is the guy who, seemingly without rhyme or reason will raise the $2 large blind to $20 – with as bad a hand as 8-5 off-suit or Ace-rag or J-2 suited. Or he’ll come over the top on the flop with bottom pair and a lousy kicker. You bet $15 into three players with your

on a board of

. I’m talking about him!

You probably know him best for the hands that played out like the one I had against him in a private game in a club in Boston the other night. I started with

in the cutoff. Two players had called the $2 large blind. I raised to $12. He was in the small blind and raised me to $30, saying “I have nothing!” He cackled a couple of times as the large blind and the two callers folded. I just called.

– a great flop for me with my overpair of Jacks I thought. He bet $100. He had another $100 left. I had a few hundred more. I made it $200, putting him all in, figuring he had his typically random hand and was just acting crazy. He called with his final $100. We flipped over our hole cards as was the custom in this club when players were all in. I showed my Jacks and he revealed

. The turn was the

. The river was the

. He laughed and raked in the pot, saying “I knew that Ace was coming – I was due.”

Though I had lost $230 I wasn’t discouraged – though it would have been easy to be upset. I just saw it as an inevitable swing against this loose and aggressive player. I hoped for some solid cards later in the night, knowing that if he continued to play this way, and if I got some cards, I’d eventually come out considerably ahead of him in the long run.

Strategies for Playing the Wild Man

So what’s the proper strategy to adopt against guys like this? I stress three basics: isolate, play more hands, respect the other players.

Understand that a maniac often raises with sub-premium hands. This does not mean that he isn’t holding a powerful hand when he raises. It just means that his range of hands is much, much greater than that of a solid player. So the chances that his raise indicates that he has a premium hand is much less than that of other more conventional players when they raise.

This means that if you do hold a legitimate raising hand, you are likely to be in the lead against him. However, being in the lead against him doesn’t mean that you are a favorite to win the hand if other players are also contesting it. Though they may be underdogs to you as well, the addition of the maniac’s chances and the chances of the other person or persons in the hand against you might turn you into an underdog to win.

Consider, for example, the above hand when I held a pair of Jacks against his suited A5. But rather than having it heads up against the maniac, I was also against two other callers, one with a

, the other with a

.  Though I would still be the most likely player to win the hand, at roughly 31%, my three opponents at between 22 and 23% each, gang up on me, so to speak, to make me more than a 2:1 dog against the field as a whole.

So, the first basic change to your strategy is to isolate the maniac – to make it a heads up battle between you and he. There are two ways that his can happen. Either he can isolate himself with a raise that knocks out other players (as in my example above) or, if you act after him, you can knock out the other players with your raise or reraise.

If, for example, the maniac is on your right (which is where you generally want him), and he raises to $20 in an otherwise typical $1/2 no limit game, then you make it $40 if you have a legitimate raising hand of your own. You don’t want to just call; for fear that other hands will also call along, reducing your probability of winning the hand.

On the other hand, if your maniac opponent has already limited the field for you, then you don’t need to raise before the flop or if you are still on a drawing hand. He’s already assured you of the heads up match that you want – without you having to put more chips at risk.

So, for example, if the maniac is on your left and you have

and you raise and are then reraised by him, knocking out all other players, then you would just call – since you haven’t yet made your hand and would like to see the flop. There’s no need to escalate further since all other opponents are already knocked out. If the flop hits with an Ace or a King you can then bet large or go for a check raise, depending on your read on whether he’s likely to fire another barrel.

The second basic change in your strategy is to expand your playing options to include hands that you might otherwise toss. If, for example, you are dealt a pair of nines in early position and called for $2, you might typically fold it if there were a raise and a call from typically solid players. If, on the other hand, the raiser is a maniac, then you might re-raise him, hoping that he and the player who called him might give up their hands right there or that the maniac alone would call. You’d figure that you probably have a stronger hand to either player, since the maniac raises with substandard hands, and the caller was good enough to have raised in an attempt to isolate the maniac himself if he had a legitimate raising hand.

Similarly, if you were in late position with King-rag suited and the maniac raised to $20 and got a caller, you might well play that hand with a call, even though against typically solid opponents you would fold. You would figure that even though you are probably in third place, you stand to win the entire stack of the maniac if you hit even just a King, and conceivably two stacks if the man in the middle has a legitimate hand and doesn’t fold to your bet. Of course, you have to consider the players and the specific cards, but in general, the more you play against the maniac the better your chances are of winning all of his chips. So you don’t want to limit yourself to just the regular range of hands that you’d play against your more conventional opponents.

Respect the Other Players

Finally, the third basic strategy adjustment is to be wary of the other players in the hand. Realize that even though you might have a huge advantage against the maniac when you have borderline or premium hands, other players may be ahead of you – especially if they showed aggression after your raise. If they’re at least halfway attentive and solid, they’ll be playing more hands as well – and will be aware of the maniac’s tendencies to overplay his hand. Keep an eye out for their moves – and tend to stay out of their way when they show aggression.

Here’s an example of that. You have a pair of nines before the flop. The maniac is to your right. He raises to $20. You want to isolate him, figuring you’re ahead, and make it $40. Three players fold, as you expect, but the next player makes it $80. The maniac goes all in for $200.  Even though you don’t respect his raise, you have to give some respect to the re-raise from the third player. Bow out now.

Similarly, if a player in front of you re-raises the maniac before it is your turn to act, usually bow out unless you hold a premium hand. The raise from this player indicates that he has at least a fairly good hand. Better to save your chips for those opportunities when you can play heads up against the maniac.

One caveat that I’d make to this, however.  As the game progresses, and as other players catch on to your tendency to attempt to isolate the maniac, they may well recognize that you are doing so with sub-premium hands.  You have to be concerned that they will re-raise you with junk – just to knock you off your hand.  They may calculate that even if they raise you when they have garbage, if they routinely get you to fold, the addition of your money to the pot makes their raise profitable – since it pits their substandard hand against the likely substandard hand of the maniac.  Even if they win these contests only 50% of the time, they’ll show a profit because of the money you have added to the pot.

In summary, adjust your play against the maniac by isolating him when possible, playing more hands against him, and being wary of the other players in the pot.  If you do so, though the variance in your bottom line will be greater than in a game without a maniac, you will almost surely show a profit in the long run against this type of player. 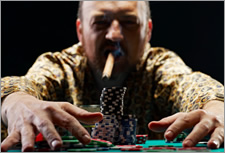