First off, I’d like to thank all the poker forum members that gave me such great feedback on Part I of this piece on micro-limit online poker strategy. In that piece, we learned about some of the tendencies that experienced players were likely to see from rookie micro-limit players. In this part, we will look at some of the techniques that smart poker players can use to extract maximum value from some of those unusual situations.

If you’re the kind of poker player that believes folding a hand is a sign of weakness, then you’re in the wrong game at the wrong stakes. The best way to take advantage of low-stakes players is to make sure that you have top-notch starting hands, preferable those in Sklansky’s Group I (AA, KK, QQ, JJ, AK-s) or Group II (TT, AK-o, AQ-s, AJ-s, KQ-s). With the big pairs, you will often dominate players who fall in love with their middle or low pairs. The story is the same when it comes to big aces, as many micro-limit players will push with any ace, regardless of kicker, suited or not.

If the flop gives you a strong drawing hand (nut straight or better), you should make the decision early either to raise – and get more money in the pot when you do hit your draw – or fold – and wait for a better hand, position or opportunity to play. When you call or check, you let the inexperienced player take control of the action. When you raise the betting, you force your opponent to think, which often leads to his mistakes and your profits.

To borrow a term from MMORPGs (a type of game that has a lot in common with online poker), even the biggest “n00b” knows to reraise with a big pair. Online poker rookies recognize (and often overestimate) the value of big pairs, especially aces. Unlike more sophisticated players, who may slow-play aces and draw out more chips from their opponents, rookie micro-limit players all but jump out of their virtual chairs when they see aces. In these instances, you may want to think about laying down your big aces or high pairs against a third raise.

Even experienced players tend to get too enamored with a board that gives them top pair and a strong kicker. “I’ve folded a hundred hands in a row,” they say, “and, by gosh, I deserve to win this hand with top pair.” However, with all the various hands that a rookie player might call with, you’ll have to be careful in case they hit a sneaky small set or a hidden straight draw. The same idea goes for overpairs; beware the player that bets into a board full of rags – he may have miraculously hit two baby pairs to bust your pocket queens or jacks.

NO, these initials have nothing to do with expletives, even those you may type in your chat box after a particularly brutal beat. The great poker writer Mike “the Mad Genius” Caro coined the expression “Fancy Play Syndrome” to describe players of a certain experience level who make moves that they think will impress the other players at the table. As we saw in part one, not only will most micro-limit players not recognize these moves, and thus they won’t give Mr. Fancy Play the adulation he craves, but also these curious bets can often backfire. While some players may attempt FPS moves to trick opponents into putting them on the wrong hand, most micro-limit players don’t look past their own cards or attempt to guess an opponent’s hand.

One instance of FPS comes from slowplaying a strong hand in order to induce a bet from an opponent. Many micro-limit players are “calling stations”: they may not always push the action, but they’ll often call a bet with a weak hand or mediocre draw. When you slowplay a monster hand against such an opponent, you are giving them free chances to fill up whatever unlikely draw they’re chasing. If you stay aggressive and continue to drive the action, they will often pay you off at the end.

A technique familiar to many experienced hold’em players is the “continuation bet”. When a pre-flop raiser gets called, he will often make a bet on the flop as if either the flop improved his hand or to continue to represent a strong hand. Against seasoned opponents, a continuation bet (or “c-bet”) is a sign of strength. Against “micro-donks”, the sign might as well be in Klingon. In their minds, their hand was good enough to see a flop and, now that the flop is here, it’s still good enough to go on. The c-bet also makes for a bigger pot and more incentive for the ‘lucky dog’ to chase their draw as far as possible.

Take Me to the River

Some forum posters and others who read part one of this piece recommended strategies such as “value bet relentlessly” and “never bluff” when dealing with micro-limit games. In my experience, a technique that I’ve found to be successful combines these two ideas. Since players who chase draws will miss much more often than they hit, a useful tool is a value bet on the river, also known as a “Post Oak bluff”. When the opponent realizes that they missed their draw, they will often fold on the river to a small bet, regardless of pot odds. This type of bet is often a cheap way to pick up a pot without a hand, especially against calling-station-style players.

One great advantage to playing micro-stakes is that you can make a maximum buy-in for $20 or less per table. As long as you can maintain a large stack (around a hundred big blinds), you can put pressure on the shorter stacks and force them into making bad decisions. If you do take a bad beat, rebuy and build your stacks back up. Remember, your opponent’s mistakes are your main source of profit. The more you can force mistake-prone, inexperienced opponents into difficult situations, the more money you stand to make in the long run.

While micro-stakes games are not as glamorous as the “Big Game” at Bellagio or the nosebleed-stakes online games frequented by Phil Ivey, Gus Hansen or Patrik Antonius, they can represent a great, untapped source of poker profits. Speaking of “untapped”, just remember that, when playing at these stakes, not to “tap the glass” and scare away the fish! 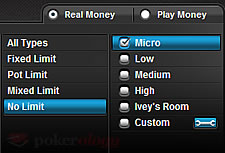