Poker is a highly competitive game where the winners stand to win large amounts of cash for beating their opponents. Online poker is no different. As such, player cheating is an issue. Some players will do anything they can to gain an edge and increase their chances of winning, even if it means resorting to cheating. The relative anonymity of internet poker facilitates this.

This is a method of cheating by abusing a featured called “all-in protection” or “disconnect protection”, which was designed to help online poker players. Basically, it works as such – when a poker player times out or disconnects from an online poker room (a rather common occurrence, given the fickle nature of many internet connections), any money that the player has invested in the pot will be protected. When the player logs back in, they’ll be entitled to receive the money they invested, since it apparently wasn’t their own fault that they were disconnected. If the disconnected poker player wins, he wins the part of the pot that he bet on, and the player with the next best hand wins any side pots that happened after the disconnect.

Some poker players try to exploit this feature. They intentionally disconnect their internet connection when they’re afraid to make a poker decision, in order to hold onto their invested money instead of folding and losing it. This is a clear-cut example of cheating and online poker rooms are well aware of this exploit and have responded. This type of cheating is nowhere near as much of a problem as it was in the past.

There was a time when virtually all online poker sites had a feature called “disconnect protection”. Many online poker rooms have completely stopped offering disconnect protection. Full Tilt and Poker Stars will give players adequate time to reconnect, should there be a legitimate disconnection problem. But if they fail to get back to the action within the allocated time, their hand is folded if further betting actions occur. This completely eliminates the all-in abuse cheats from these online poker rooms.

Collusion is basically defined as two players covertly working together in order to increase one player’s chances of winning. To get an idea of how this works, imagine two or more friends logged into the same online poker room, playing at the same table. They share information about their cards in order to get an idea of what cards aren’t remaining in the deck. Worse still, they work together to increase the pot size or to squeeze other players out of a hand. Presumably, they’ll share their profits when the game is over.

Collusion is often difficult to spot because it’s often hard to tell if players are working together or simply making decisions on their own based on their individual poker strategies. A player folding AQ before the flop might be doing it because his friend has AK, or he might simply be a very tight player who is only willing to pursue absolute premium hands.

Player cheating of this nature, however, is actually easier to detect than you might think. Online poker sites have a complete hand history database for all of their poker players. They know if certain players have a history of playing on the same tables. Their databases are automatically scanned with complex algorithms that search for any signs of collusion. When something fishy is spotted the staff will manually review the action.

Online poker rooms take multiple steps against collusion and, accept on the rarest of occasion, it is not an issue when playing online poker. Having said that, online poker rooms take reports of suspected collusion very seriously. Poker Stars is widely considered one of the best sites when it comes to reviewing these situations thoroughly. Regardless of which online poker room you play at, be sure to contact customer service immediately if you suspect player cheating, including collusion, at your table.

It is against the terms of most online poker rooms to sign up under more than one player account. However, this doesn’t stop people doing so – and in many ways the online poker rooms only have themselves to blame for this. Most of the cases where players have create additional accounts are usually because the player wasn’t receiving rakeback on their existing account, and therefore paying more than other players. But there’s a big difference between creating a new player account and the true definition of multi-accounting, which can be a form of collusion.

Multi-accounting is when an online poker player who plays under more than one account at the same time on the same site. A player might enter an online poker tournament under several different accounts in order to increase their chances of cashing. In some rare cases they could even end up on the same table, which would obviously be a huge advantage (see collusion, above) and unfair on the other players. The good news is that this form of cheating is fairly easy for the online poker rooms to spot, and players who attempt to cheat in this way will face serious consequences.

Poker bots are software programs that have been designed to analyze a poker game, particularly starting hands and community cards, and make decisions for the player. A poker bot can be set up to play poker for real money while the actual player sleeps, goes to work, or just generally doesn’t pay any attention to the game himself. The simple fact is that online poker sites disapprove of bots, and that you should consider them to be a form of player cheating.

Poker bots are not really as big of a problem as some angry poker forum posters (that may have simply been beaten fairly) would like people to believe, and get far more attention that they deserve. In the rare event that a poker bot has been identified in the past, it has been shown to be a quite unsuccessful technique. Bot algorithms are no match for even the amateur poker player and sites found guilty of using poker bots (however ineffective they may be) have always failed or been forced out of the online poker market.

There’s no denying that cheating occurs. It happens in live poker games, and it happens in online poker games. There will always be cheaters trying to scam people when there’s money involved. But it isn’t nearly as bad as you might think. Online poker rooms know that dishonest players will try and cheat given the opportunity, and they put a lot of time and resources into making the games fair. If you truly suspect foul play at an online card room, simply cash out and take your money elsewhere. 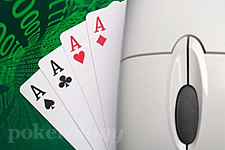 There will always be cheaters trying to scam people when there’s money involved and online poker is no different.