In an earlier piece, I noted the apparent lack of enthusiasm for poker rooms on the Las Vegas Strip by both visitors and casino executives. Aside from a few notable exceptions, poker rooms may be a dying breed among Strip casinos. However, many off-Strip locations, especially Downtown Las Vegas, have seen an increase in traffic to their poker rooms. In response, these properties have enhanced the atmosphere and amenities in their rooms to bring back an aura of comfort and elegance to the game.

Tourists who visit Las Vegas have insisted for years that the main attractions on the Strip are mean for “walking and gawking”, while the far less glamorous destinations on Fremont Street in downtown Las Vegas offer the best bargains in terms of hotel rooms, food, drinks and especially gambling. Almost all of the historic locations on the city’s “original” Strip house poker rooms with enthusiastic players ranging from fifty-year veterans with stories of Sinatra, Rosenthal and Moss, to youngsters on a budget vacation eager to learn the game of Hellmuth, Brunson and Chan.

One of those downtown poker rooms undergoing a renaissance is the Golden Nugget. The quiet, wood-paneled room sits just off the main casino floor and typically spreads both $2/$4 limit hold’em and $1/$2 no-limit hold’em. Although the small floor space and few tables may not measure up to such Strip venues as Venetian or MGM Grand, the rooms never feels crowded or cramped. One bargain that players can take advantage of can be found in numerous coupon books (including the American Casino Guide) that allows players to buy $60 in poker chips for only $50 – a welcome incentive for the budget-minded player.

No true poker player can consider his or her visit to Las Vegas complete without making a stop at the birthplace of the World Series of Poker. After multiple ownership changes, remodeling attempts, and the loss of their hallmark tournament and Horseshoe name to Harrah’s, Binion’s still stands as a monument to the game that the road-weary Texas touring gamblers brought to the desert all those years ago. While the World Series may have moved to a more spacious and colorful arena and out of “Benny’s Bullpen”, Binion’s still carries the same air of history as the great sports arenas of days gone by. None of us will ever hit a home run in old Yankee Stadium, score a goal on the ice at the Montreal Forum, or sink a game-winning basket as Boston Garden. However, all of us can take a seat at a $2/$4 limit hold’em table in the same space where the game once crowned its annual world champion.

The new Hall of Fame poker room at Binion’s has been set a few steps below floor level. A small lobby with leather chairs will make your wait for a table comfortable and relaxing. The glass wall near the room’s entrance gives a feeling of openness without all the accompanying noises of slot machines and cheering players. The back wall features large-screen flat-panel HDTVs in each corner as well as a gallery of vintage black-and-white photographs of the origins of poker’s biggest annual event. Binion’s also has one of the best comp rates for poker players anywhere at $2 per hour.

With the cash games relocated to their new area, Binion’s has expanded the space near the rear of the first floor and dedicated it to the game that made it famous – no-limit hold’em tournaments. Like most casinos, Binion’s runs several daily tournaments. The most popular of these tournaments is the Saturday afternoon event with a $70 buy-in, one $40 re-buy and a guaranteed prize pool of at least $10,000. Even in mid-January, during one of the lowest point of the tourist season, the tournament drew over one hundred fifty players with a top prize of almost $3,000. Of course, they also have their Gallery of Champions with portraits of all the WSOP winners up to 2005 before the tournament relocated to the Rio.

Not all of the Vegas poker action is confined to Fremont Street. Take a short drive off the Strip to Paradise Road and drop in on the home of big rock stars and bigger neon guitars. Last year, the Hard Rock Las Vegas opened their new concept in poker rooms, the Hard Rock Poker Lounge. In addition to their daily tournaments and no-limit cash games, this rooms also plays host to numerous celebrity charity poker events. If you’ve ever wanted to have fun and donate some of your bankroll to a worthy cause just so you could say, “I busted <Rock Star>, <Pro Athlete> or <Movie Star>”, then try out one of these events. After the tournament, if you’re still feeling brave and/or lucky, you may try to get them involved in a cash game and make back your donation!

A few blocks across I-15 from the Strip on Flamingo is the party-centric Palms. While the Maloof-owned property may lack the history or impact of most poker rooms, it makes up for its lack of poker clout with a festive atmosphere and a mix of locals, tourists and even a few pros. The Palms has both a low-limit room with $2/$4 and $4/8 games as well as a no-limit room with $1/$3 and $2/$5 blinds. However, you may want to be aware of the numerous distractions surrounding such a famous party spot: don’t let the sight of Britney Spears or Paris Hilton take you out of your game! If you’re the type of player who likes to grind out wins in tough-minded, serious games, go fight the big boys at Bellagio. If you want a fun, loose game where chips and drinks both go down easily, then have your own poker party at the Palms.

Even though poker may be on the downswing of its boom period on the Strip, real poker players can always find a game if they’re willing to travel off the well-worn tourist paths. Instead of logging the hundreds of miles that men like Moss, Brunson and Pearson had to drive through the back roads of Texas, your best bets at a juicy poker game may be just a mile or two from your exotic Strip hotel. 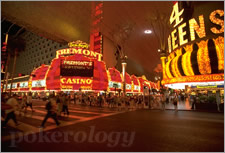 Binion’s still carries the same air of history as the great sports arenas of days gone by.