I wrote my first video poker article on a whim and it focused to Jacks or Better. I then felt that an overview of Double Double Bonus Poker was in order as that form of video poker has become the most popular game in Las Vegas and the strategies were different. Having explored those two games I now feel that in order to complete the set I should present the form of video poker that may well exceed the current leader and become the most revered game and that would be Multi Strike Poker. If it’s an action packed roller coaster ride that gets your juices flowing then check out Multi Strike Poker.

Multi Strike is a game which parlays your wins into larger wins. There are four lines and you start out on the first one which costs twenty credits to play when playing the maximum which is a must. On a single line, one dollar machine, playing maximum credits, which would cost you five dollars – playing Multi Strike that first line will cost twenty dollars. If you get at least a pair of Jacks you win according to the value of your hand and in addition move up to the second line. Now on the second line, the rules are the same – you must get at least a pair of Jacks but now you are paid two times the number of credits awarded based upon the value of your hand and gain the opportunity to move up to the third line. Again, a minimum of Jacks or better is required but if you get a paying hand it is paid four times the value and again you advance up to the fourth and last line. Now if you get a winning hand it is paid at eight times the normal value. In our example of playing a one dollar game of Multi Strike if you are fortunate enough to hit a Royal Flush on the fourth/top line your jackpot would be $32,000 instead of the normal $4,000. Wow, this sounds like fun!

Multi Strike Poker is the ultimate thrill ride for variance junkies. While the payoffs can be euphoric, there are some negatives as well. As pointed out in my previous video poker articles, when the casino gives the customer something good they make sure to take something away. As mentioned, the game parlays your wins which simply means you need to win on a line to proceed to the next. What if you don’t get at least a pair of Jacks? The answer is – you lose but now it is costing you four times as much as the stakes you were just playing. It is not uncommon to play a dollar machine and at the cost of twenty dollars (playing maximum credits) lose five or six hands in a row. On your single line game you would be down $25 or $30 but now it becomes $100 or $120. In addition, losing five or six hands in a row is far from the record. Multi Strike is a game of exciting highs and depressing lows. If you can’t stand the heat don’t even think about entering the Multi Strike kitchen!

In order to take advantage of the parlay effect of the higher paying lines, the optimum strategies for this game are very different. Your goal is to climb up the lines where the payouts keep doubling from one to two and then four to eight. With that in mind the strategy tips listed should make sense. The strategies change from line to line, ultimately resulting in reverting back to normal strategy by the third line. Multi Strike can also be played in any video poker format but this article will combine Multi Strike with Double Double which is the way I play it. Hell, if you want action and big pay outs this is the combination to play. If you want your bankroll to last as long as possible and are not concerned with trying to hit it big with a jackpot, then my advice would be to stick with Jacks or Better. For the rest of you action junkies, let’s look at some of the key strategy changes for the exciting game of Double Double Bonus Multi Strike Poker.

All strategies are based upon playing the maximum number of credits. The following are the basic strategies and cover most situations. Advanced, perfect strategy would encompass so many unusual exceptions as to be beyond the scope of this article.

Your only goal when on the first pay line is to get to the second line.

Again, your only goal here is to move up to the next line where the payout becomes four times normal. The strategies are the same as the first line with the following exceptions.

With a four times payout most strategies revert to normal Double Double strategy which if you need a brush up can be read in my previous video poker article. However, since there is a marvelous upside in getting to the top row, namely the payoff becomes eight times normal, there is one exception.

Congratulations if you have reached the top line, it’s what the game is all about! Now there is no further line to get to that would entail a strategy to that end. Play all holdings in the normal Double Double strategy.

For those of you who have already ventured into this realm of video poker you know how exciting it can be – including the enhanced audio sounds with each line’s uniqueness. I’ve hit some nice jackpots on this game and while never hitting the maximum of a Royal Flush on the top line, I do have a friend who cashed for the $32,000 maximum for a twenty dollar investment. Now that my friends is what I call a parlay! 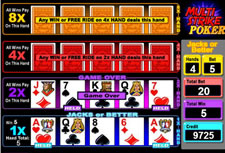 If you can’t stand the heat don’t even think about entering the Multi Strike kitchen!