One of the more fascinating aspects of online gaming that has received a boost in popularity in recent years is the massive multiplayer online role-playing game (MMORPG). With the advent of powerful web servers and widespread access to broadband internet connections, developers of such games as Everquest, Asheron’s Call and World of Warcraft have taken dice-and-paper-style games like the classic “Dungeons and Dragons” and created new virtual worlds full of elves, trolls, barbarians and magicians.

But what do magic spells and swordfights have to do with poker? In many ways, a poker game is much like a role-playing session.

In a typical role-playing game, a player plays the role of a character in a fantasy story. The “player character” (PC) comes with a data sheet detailing their background, history and vital statistics. The player’s main job is to stay “in character” as much as possible. In other words, if you’re playing as an evil wizard, you won’t be help little old ladies across the street.

In poker, your PC is your table image. While you won’t carry around a character stat sheet, your betting amounts, timing and other patterns will show the other players your tendencies. Occasionally, you’ll want to “break character” and change up your play.

A quest is a mission that you and your fellow PCs taken on. You may be called on to slay a dragon, rescue a princess or recover a treasure. You use your character’s skills and attributes to accomplish tasks on our way to completing your quest and brining your character home alive.

Many players believe that the “quest” in poker is to win as much money as possible. In reality, the mission in poker is to make the best decision given the information at hand. You can use your table image to represent a hand and force your opponent into making a bad decision for him, which, in turn, makes you money.

Speaking of money (as poker players tend to do), MMORPGs often measure a character’s wealth in gold pieces (GP). PCs can use their wealth to buy weapons, armor, magic items and other equipment that they can use later to carry out other quests.

At the poker table, chips serve as both the measure of wealth and the weapons of war. Many successful poker players hold to the idea that, at the table, chips are not “real money”; they don’t become actual cash until the player leaves the table. During the game, chips are weapons. Just as an elven archer uses his longbow to mow down adversaries, accomplish his quest and gain more gold, a poker player uses his chips to complete the same tasks.

One of the primary objectives of MMORPGs is for the player to “level up” his character by gaining “experience points” (XP). The more difficult a quest is, the more XP the character gets after he completes it. Once the character accrues a certain number of XP, he can advance to the next level of his class and either enhance his current abilities or gain new skills. Much like advancement in military ranks, characters are often identified as a “Sixth-Level Fighter” or “Tenth-Level Thief”.

Unfortunately, such a clear-cut ranking system does not exist in poker (unless Phil Hellmuth counts as a “Hundredth-Level Jackass”). The closest resemblance poker has to a measure of skill level is in cash games. As was mentioned in an earlier piece, players who play at lower stakes are typically less skilled than those at higher stakes. Not surprisingly, you’ll find only the best players at the games in Bobby’s Room or the nosebleed-stakes online games, while the minnows swim in the 10c/25c tables.

Another way that MMORPG players gain experience points is to kill monsters that stand between them and the object of their quest. The tougher the monster, the more XP the player gets for defeating it. The catch is that the PC has to kill the monster before it kills him. With tougher monsters, the PC may emerge victorious, but still seriously wounded.

The closes analogy to this situation is in poker tournament play. At a tournament table, the other PCs are the monsters. If the player wants to survive and achieve the objective of his quest, he must either slaw as many “monsters” as he can, or escape from their clutches before they do him in.

Once concept that online poker borrowed from MMORPGs is the avatar. The avatar is the image that the player uses to represent his character. In most cases, the avatar has no resemblance to the player in real life. In both the fantasy setting and the online poker world, many male players take on female avatars as a way to fool their opponents into underestimating them. (At least, that’s what they tell their friends.)

Another facet of MMORPGs is the real-time strategy game (RTS). In an RTS, the PC is the ruler of a small kingdom surrounded by territories controlled either by other PCs or by a computer opponent. The objective is to conquer as much territory as possible through means including diplomacy, technology and brute force while coddling your allies and crushing your enemies.

Again, tournament poker is the closes analog to these games. The only true winner in a poker tournament is the player who uses his chips, his strategic skills and diplomatic subtleties to annihilate all opposition at the table and take his place as the ruler of the (poker) world.

Both online poker and MMORPGs also share a dark side. Online poker is not the only game that attracts obsessive personalities. The leading MMORPG on the market earned the nickname “World of War-Crack” due to its addictive nature. According to news reports, a man in South Korea died after a marathon online gaming session. Many more uses start to blur the mental lines between fantasy and reality; they often feel more in control of their fantasyland, whether it’s a green fairy forest or a green felt table.

One major difference between these two settings makes poker much more palatable to non-RPGers. Even if your dwarf wizard has a million gold pieces, it makes no impact on your real-world bank account. If you can slay all the dragons, orcs and (especially) trolls in an online tournament, you can take home some real gold.

One Response to “MMORPG, Magic Spells, Swordfights and Poker” 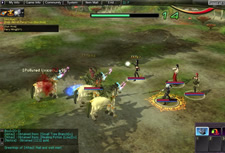 Just as an elven archer uses his longbow to mow down adversaries, accomplish his quest and gain more gold, a poker player uses his chips to complete the same tasks.