Many of today’s poker pundits abhor the play of marginal hands and place enormous stock in rigid starting hand requirements. Of course the poker playing public, who watch the pros on television, tend to swing to the other extreme as they see their favorite pro enter a pot with complete cheese and turn it into a winner. Since we have such a wide range of “correct” approaches maybe it doesn’t even matter. If it didn’t matter, the name of the game would be roulette not hold’em poker. Sorry, I couldn’t resist.

While one approach seems to recommend playing like a nit, the other seems to endorse playing like a maniac. The ideal, most profitable playing style revolves around the most ubiquitous phrase in all of poker – “It depends”. While marginal is not good, good is relative as in “It Depends”. It depends on one’s position, who has entered the pot, if it has been raised and a host of other variables which make the game so damn frustrating and sometimes even infuriating. I attended a poker seminar many years ago which was hosted by David Sklansky and Mason Malmuth, two names with which any poker student should be quite familiar. It was handled basically in a question and answer format and the main focus was limit hold’em. A somewhat heated discussion ensued regarding the value of the starting hand of Ace-Jack offsuit.

Quite frankly, at the time, Ace-Jack sure looked sweet to me pre-flop and back then I would be hard pressed to consider a fold. Both Sklansky and Malmuth regarded it almost as junk which became an eye opener to me. Specifically, it is listed in Hold’em Poker for Advanced Players as a group 4 hand in their hand ranking chart which would mean it is far from a premium holding. The main problem with this holding is it can be easily dominated by hands such as Ace-King and Ace-Queen. Hands which are likely to be dominated are the worst of the marginal hands.

Domination is defined as occurring when two players hold a card of the same rank but one holds a smaller kicker – the player with the smaller kicker is dominated. Easily dominated hands are best described as hands that you should usually raise with or fold. Using the aforementioned Ace-Jack – you should raise if in late position and are first to enter the pot while, if the pot has been raised in front of you, a fold may well be in order.

I now will give you some food for thought by demonstrating how much potential danger easily dominated hands can represent. If this analysis does not give you pause for thought the next time you decide to play Ace-Jack, King-Queen or Queen-Jack in a raised pot, then please find the game I’m playing in as I could use the extra money. In terms of domination, you would be better off holding complete trash such as the worst hand in hold’em, 7-2 offsuit than a hand such as Ace-Jack. Holding 7-2 offsuit against a premium hand such as Ace-King would make you about a 68-32 dog while, against the same Ace-King, holding Ace-Jack, you would be about a 71-29 dog. The reason should be obvious and it is because you become dependent upon only three outs to your side card. Obviously, good looks don’t count for everything!

Long term the marginal hands that are easily dominated become the biggest money losers for players that just can’t seem to get away from them. You must realize you’re playing a potentially troublesome hand when you play Ace-Jack and are dreading an Ace on the flop. You want a Jack not an Ace – that should sound off a loud alarm that maybe the hand should not have been played in the first place. If Ace-Queen, Ace-Jack type marginal hands can be dominated, then the groups below hands containing an Ace such as Kings, Queens and Jacks become really dangerous.

When viewing an early raise while holding a marginal hand, I have found the old poker axiom of “When in doubt, get out” to be very wise advice. That wisdom can save you a whole bunch of chips. Instead of viewing these marginal hands as playable, think about how much you enjoy others playing those hands against your Ace-King. Avoiding domination is one of the best bankroll preservers in my view. Try and be the Dominator not the Dominatee – it’s a great deal more profitable. 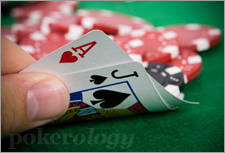