Managing the Fall (The Greatest Loser)

We’ve all been through it at one time or another. The endless parade of garbage cards, punctuated by a few promising hands that never hold up. Top pair beaten by two pair. Two pair crushed by a set. Draws that can never quite get there – and on those few miraculous occasions when they do, doomed to run up against something better. But most of all, the suck-outs. The idiot who called you all the way down with bottom pair, only to spike trips on the river. The moron who cold-called your raise with 8-3 suited and flopped two pair. And while part of you knows that it’s good to have these strategically-challenged halfwits in your game, that you should want opponents who call with longshot junk, none of that seems to matter because right now they’re beating you senseless.

Bad beats and losing sessions are an unavoidable part of poker. The trick is knowing how to handle them. When nothing is going your way and your chips keep evaporating as fast as you can buy them, far too many poker players don’t know how to cope. So they turn a small setback into a large loss, or a large loss into a soul-crushing, bankroll-busting disaster.

Even if most of us were as skilled at poker as we think we are, losing is inevitable. The partial role of luck in poker dictates that we will end up in the red sometimes. But it’s amazing how often we forget that. Perhaps not in our brains, but in our hearts and our wallets, we want to be exempt from this rule. We want to be special, above it all. And when the deck smacks us around and remind us that we are not, some of us can react badly.

Nobody likes to fall, especially not in front of other people, and most especially not in front of our adversaries. At best it’s embarrassing. At worst it can be a severe blow to one’s confidence. In that sense, the poker player mired in a brutal losing streak is like a dying man going through Elisabeth Kϋbler-Ross’s five stages of grief. First there is denial: I am not losing – I’m going to get my money back any minute now. Then comes anger: How could that piece of #@*% call me with that garbage? I did everything right! It’s all his fault! Next comes bargaining: Just let me get back even again and I swear I’ll quit! Then depression rolls in: No matter what I do, I’m always going to lose anyway. Go ahead, take my money, see if I care! (Now he has just passed what Mike Caro refers to as the “threshold of misery.”) And finally there is acceptance: Okay. I got my butt kicked. I’m done.

But if we know these occasional falls are unavoidable, there is something we can do about it. We can control the fall. In the words of Joseph Campbell, “If you’re falling, dive.” To dive instead of falling means that you manage the descent. You control the landing. You minimize the damage. In poker, this begins with skipping over the first four stages of grief and jumping right ahead to acceptance. Accept that this session will probably end up as an uncomfortably large negative number in your records. Accept that the arrogant dingbat in Seat 3 is going to get the better of you for now. Accept that you probably won’t be able to get your money back today – or perhaps not even tomorrow or next week. And most importantly, accept that you might be playing on tilt.

If the losing streak is bad enough that it’s causing you even the tiniest twinge of emotional distress, you are by definition on tilt. If you call with just one hand that you should have folded because you’re impatient to get back even, if you muck just one hand you should have called because you’re gun-shy of losing again, you are playing on tilt. And by continuing to play even when you know that you are compromised, you’ve essentially given up. You have lost control of the fall. So instead of a short fall with a soft landing, now you’re plummeting wildly into depths unknown – and by the time you finally do hit the ground, god only knows how much money you’ll have left.

For starters, take a break. A few minutes, an hour, a week – however long it takes get your head screwed back on straight. Go for a walk, see a movie, do anything to get your mind off the game for awhile. When you return to the poker table, you’ll have a fresh perspective on the situation and the next hand you play will be as a thinking, rational player, as opposed to the free-falling tilt-o-rama that you were before.

Something else you can do when the cards conspire against you and that awful sinking feeling takes over is to tighten up your starting standards. Pass on the marginal and speculative hands – especially if you’re facing a raise or have reason to believe that the pot will be raised – and stick with the solid, premium holdings. That’s one way to at least slow your descent until you get a chance to catch your breath and regroup.

But perhaps the best way to turn a fall into a dive is simply to learn from it. After the session is over and you’re able to analyze things in a clear, logical manner, review the action in your mind. As much as you can, go over the individual hands. Did you make all the right plays? Did you push out any frustration calls or hot-tempered raises? Did you make any spineless folds? You must be brutally honest with yourself here, or else the entire review will be less than worthless and you’ll learn nothing. In which case you’re doomed to repeat the entire debacle. But if you can figure out just one valuable piece of information – if you can identify a trigger that puts you on tilt, or discern a destructive pattern in the way you responded to losing – and then use that information to your advantage in future games, you can still gain a victory from this loss.

Of course it’s unpleasant to go through a losing session, to be card-dead for hours and accumulate a mass of bad-beat stories. But learning how to manage these losses, and the tilt that almost invariably follows, is an indispensible part of becoming a successful poker player. You can’t control luck, you can’t control the cards, but you can control how you respond to bad luck and bad cards. And that’s the way to be the greatest loser.

2 Responses to “Managing the Fall (The Greatest Loser)” 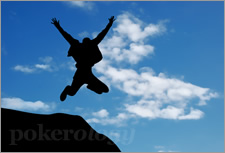 To dive instead of falling means that you manage the descent. You control the landing. You minimize the damage.