Machiavelli – A Master of Poker?

The Prince, is the name of a famous book written by Niccolo Machiavelli which has been studied for its insights for centuries. Originally written in 1513 and circulated among his friends the work was not published until 1532, five years after Machiavelli’s death. Generations of politicians have either lauded or scorned the cynical approach outlined by Machiavelli in his famous work. Since he was not alive to interact with the debate relative to his true intentions, we are left to our own interpretations. His legacy is the introduction of the word Machiavellianism to our culture which has come to mean the use of fallacious and extremely cunning tactics in the realm of politics.

At this juncture some readers may be thinking, so what does any of this have to do with poker? A fair question and the answer is… a whole hell of a lot. Are not the tactics and strategy for much of poker surrounded by deceit and cunning? Well, Machiavelli may well be a master we can all learn from to improve our poker playing results and round out a few other rough edges in the process. I don’t imagine Machiavelli played poker but I’m certain he would have been a force to be reckoned with on the green felt.

One judges by the result. Well, if I’m not advocating judging your wins and losses obsessively then exactly what should we be judging? In a word the answer is decisions. Players that have been at this process for a while recognize that due to the vagaries of the game any individual session result doesn’t mean too much. If today’s result was a loss… sorry, so what, that’s poker! If today’s result was a win… good for you, congratulations… don’t spend it all in one place! Poker is a game of wins and losses and must be viewed in the long term, not by individual sessions. The key to long term positive results is good, solid decision making which is never allowed to be skewed by emotion but remains grounded in logic and poker savvy.

Even though one judges by the result is true and necessary, it must be viewed in the long run. A prevalent behavior to viewing results in the short run can be seen by struggling poker players opening up their games in a misguided attempt to recoup recent losses. This can also occur within an individual session that is not going as originally envisioned. Less disciplined players, when losing and not possessing the wherewithall to recognize that it is the long run that counts, have been know to turn a losing session into a marathon in an attempt to get even for that session. This is self destructive behavior – I know this for a fact as I’ve done it. Have you? If you can honestly respond in the negative, I would venture that you have not played very long or possess an enviable control over negative emotions. Here’s the deal … unless you’re planning to quit playing poker forever after your current session ends and since you’re on Pokerology.com reading this article, my bet is you’ll be playing this game until you take your last breath. Then poker must be viewed as one long, continuous session with occasional breaks. Once you realize there is no current session but rather a continuous session with breaks, you will free yourself from the urge to move into marathon mode to escape a loss. The monetary result is not important. It is the quality of your decision making. One member of our poker forum group is fond of saying, “Make decisions, f**k results” to emphasize this concept and RyckyRych… you’re absolutely spot on!

While Si guarda al fine… one judges by the result is a riveting quote and very true, these words written almost five hundred years ago need to be put into perspective. The perspective for our poker playing is to make sure we are judging the most meaningful aspect of our game lest we run the risk of veering off the path to ultimate success. I believe we should heed Machiavelli’s words and judge by the result while making certain that we are judging the most important criteria and that would be the quality of our decision making. May the flop be with you! 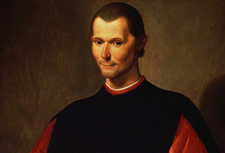 I don't imagine Machiavelli played poker but I'm certain he would have been a force to be reckoned with on the green felt.