Poker players are losers. I don’t mean that metaphysically. I don’t mean to insult you as a person. But practically speaking, most of the time when you play poker you lose. It’s just a fact.

Disagree? Think about it for a second. The opposite of winning is losing. If you are dealt 30 hands an hour, how many do you win? Even if you’re an extraordinarily loose player and very lucky you surely don’t win 15 or more of those hands. You probably win more like four or five hands an hour – at most. That means you lose the rest – some 25 or more hands every hour. Most of the hands you lose, you lose because you concede early on – perhaps after seeing no more than your first two cards. Other hands you lose by conceding on the flop, or turn, or river. Or you lose in a showdown. But one way or another, most of the hands you lose. Yes?

That doesn’t make you a bad person, mind you – or even a bad poker player for that matter. Far from it. In fact, ironically, the more hands an hour you win, the more likely you are to be a bad poker player. If, for example, you never folded, you would win more hands an hour than anyone else – but you’d probably lose the most money an hour as well. How good would that be?

The key is to learn how to lose – not to learn never to concede. That’s a tough lesson for many of us who consider ourselves competitive by nature. We don’t like to lose. We play poker to win. Our nature is to see losing as failure – instead of as an inevitable part of being overall winners. This tendency can truly hurt our bottom line – in a few ways.

First of all, if we are so loss-averse as to avoid losing at all costs, we’ll be employing a strategy that is inherently self-defeating. There are generally two ways that this occurs. For many, being loss-averse keeps us in hands longer than we should be in them. We embrace the old adage that winners never quit and quitters never win. This is very bad advice for the poker player. Good poker players do quit. They quit when they recognize that they are not likely enough to win to warrant putting more money in the pot. They balance their chance of success with the money they will win if they continue. If the money isn’t sufficient they gladly concede rather than buck the odds and play on.

Some poker players err in the other direction. They are so loss-averse that they do not engage in battles they should fight. They avoid all but the sure-win contests – folding prematurely, even though their chance of success, though not great, is still large enough when considering the amount they will win, to continue in the hand.

Here’s an example of the former problem. You have a pair of Jacks on the deal in late position. Two players call the big blind in this $1/2 no limit game. You make it $12 to go. You get three callers. The flop is

. The first player of the four who see the flop bets $30. The next player calls. The next player folds and the action is to you. You reason that one of the two players must have at least an Ace or a King or even, perhaps, AK. The other player may well have a flush draw you surmise. You figure you’re likely to be far behind one player – and may in fact be in third place. Even so, tough competitor that you are, you conclude that the battle isn’t lost. You might make a set if a Jack hits. You might make Broadway with two perfect cards. And they both might be overplaying their hands. You decide to call to see the turn.

This is an awful move. You are refusing to admit defeat when in fact that is exactly what you should do. You haven’t learned to lose by conceding when the odds are strongly against you, and so you are costing yourself money.

The latter problem of fearing loss may not be as common, but it is equally pernicious. Here’s an example of it. You’ve been playing limit hold’em with a bunch of loose and somewhat wild players. You started with a pair of Jacks in late position. Two players called the big blind in this $10/20 limit game. You raised. Everyone called. So five of you saw the flop. The flop was

. Everyone checked to you. You bet with your Jacks, since you figured that your opponents would have bet if they held either an Ace or a King. So you figured you were still in the lead. You got three callers. The turn was the

. The players checked to you. You bet $20 and got one caller. The

hit, making the board

. Your opponent paused and then bet $20. You paused, thinking about what he was likely to have.

You are torn. On the one hand he may be bluffing. It’s something he’s done before. On the other hand you’re feeling pretty weak, since he might have a pair of Aces or Kings, or even a set of 9′s or 2′s or even a flush. You decide that there are so many hands that can beat you that it’s not worth a call. You don’t want to showdown a hand and lose. So you fold.

This is a horrible fold. Admittedly, you might lose. There are many hands he could have that would beat you. But the very fact that you had to pause and think about this shows that you’re hardly certain that you have the losing hand. You even know that there is a chance, albeit maybe a small chance, that he is bluffing. The pot contains $150. You’re getting 15 to 2 odds for your call. If you fold and have the best hand you’re making a $150 mistake. If you call in error you’re only making a $20 mistake. You are surely not that sure that you’ll lose. So a call clearly makes sense. But you’re afraid to lose in a showdown. Your fear of losing causes you to make a very bad decision.

There are other problems that develop if you don’t know how to lose at poker. Some poker players get thrown off their games when the cards don’t go their way. They can’t handle, psychologically, the repeated or unfortunate losses that are a regular part of a poker game. They get so frustrated when good fortune doesn’t shine on them that their emotions cloud their better judgment. There are many names for this condition: steaming and tilting being the most common.

Losses need to be understood in the broad context of a very, very long game with lots of variance. Losing streaks, bad beats, bad calls by others resulting in tough losses by you are all a part of the game. Expect them. Anticipate them. They are the landscape of any game that couples luck and skill. If you find that you get shaken up when a loose player lucks out on the river and overtakes your hand, then learn to walk away from the game for a bit, until you calm down. And if you can’t calm down learn to leave the game for the day. 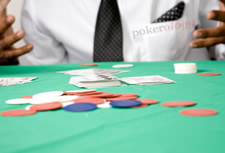 We play poker to win. Our nature is to see losing as failure – instead of as an inevitable part of being overall winners.