Do you ever get that feeling that you have seen someone before but you just can’t quite put your finger on where you saw that person? Linda Johnson is the kind of person that fits that description. If you are a poker player and have attended a few tournaments you may have noticed her calling the action. If you just watch poker on television, then you may have noticed her standing at the final table, announcing. However, Johnson did not earn the name “The First Lady of Poker” just by being an announcer for the WPT. No, her contributions to the game have been among the greatest the game has ever seen and that is why she is the newest member of the “Pokerology.com Hall of Fame”.

Linda Johnson was first introduced to the game of poker from her father. Her father made a fair amount of money from poker while he was in the Army, and tried to stress to his daughter that it was one of the few “gambling” games that you can make money at with a proper skill set. Johnson understood what her father was saying, but as soon as she left for college she forgot what her parents had taught her. Instead of playing poker, she would go play blackjack, and while with basic strategy you can almost make the game break even, her father was still alarmed when he found out her daughter had stopped playing poker. In a heart to heart kind of conversation, her father told her that with poker you can constantly make money, and with any other game in the casino that is not possible. This time, the advice stuck, and so begun Linda Johnson’s decent up the poker ladder.

After having mopped up the competition from her co-workers at her job at the post office, the next logical step was moving to the casino. In the early 1970’s Johnson was considered as a bit of a joke from the casino regulars, all guys. In fact, almost everyone playing poker at the time was a male. Johnson immediately wiped the smirk off their faces, by finishing at the final table of a $44 dollar tournament, where she was also believed to be the first woman to ever participate in that tournament. Linda would go on to become a successful cash game player over the next 20 years, but as the years went by she could not help but feel there was something more she could do for the game.

In 1993 she began publishing CardPlayer Magazine, which has since become the most respected poker magazine on the market today. Up until relatively recently, poker was still regarded as a game played by cheats and conmen, so it was Johnson’s goal to bring poker into a positive light, concentrating on the good of the game, such as the competitive spirit, and the genuinely good people who play the game. People began to see her efforts, and Johnson became very well known within the poker community.

While attending the magazine, Johnson continued to play poker, winning a WSOP Bracelet in Razz in 1997. The cash of $96,000 was one of the highest cashes ever for a woman. Her competitive juices continued to flow, and in 2000 she left her position at the magazine to go back to being a professional poker. However, just a few weeks into her second life as a professional poker player, she was asked by a brand new poker circuit, by the name of “World Poker Tour,” to join them in some capacity. Johnson took the job as an in-studio announcer, and of course the launch of the WPT coincided with the biggest poker boom in history, making it a huge success. Johnson loved her new job, but had remembered a promise she had made to herself – if she ever became even more famous, she would help the game even more. Well, being on television weekly got her that fame, and she used it to her advantage.

Arguably one of the greatest organizations to ever be founded in terms of helping the game of poker grow is the Tournament Director’s Association. Before the TDA, many tournaments, even well known ones like the WSOP, did not have a set in stone rule list, which made it very hard for a poker tournament to run properly, especially considering some tournaments now have over 8,000 entrants. The TDA created a list of rules, and structure they hoped all casinos would follow, and for the most part, any tournament circuit that wants to be taken seriously has adopted these rules. Linda Johnson co-created the TDA, with the help of her best friend and fellow poker professional Jan Fisher, tournament director Matt Savage, and poker room manager David Lamb.

Over the last few years Johnson has also helped direct CardPlayer Poker Cruises, which are cruises specifically designed just to play poker. The idea of a poker cruise was met with funny looks at first, but they have since become great fun for beginners and advanced players alike. You get a chance to sit down with the best players in the world (if you dare) and see some beautiful spots around the world at the same time. Poker Cruises first appeared around 20 years ago, but have only since gained the popularity they have, and much of that can be attributed to Johnson’s experience.

Last year was a big year for Johnson. She started the charity “PokerGives.org” which makes it easy for professional players to contribute money to their favorite charities. She was also inducted into the World in Poker Hall of Fame for her tireless contributions to the game, which makes it a no brainer that she has been elected as one of the inaugural members of the Pokerology.com Hall of Fame. 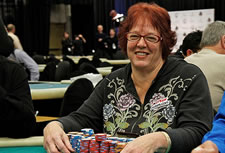 Her contributions to the game have been among the greatest the game has ever seen.