Poker is a game of skill, with a small dollop of luck tossed in. Because of this (or perhaps in spite of it) there are many online poker players who have postulated a number of conspiracy theories about the game. A brief scan of a few poker forums will reveal plenty of cries of “the game was rigged!” and “I can’t win after I cash out.” As with most conspiracy theories, a reasonable explanation usually exists.

There are a variety of poker conspiracy theories that should simply be ignored. Let’s take a look at a few of these…

One of the most popular and ridiculous poker conspiracy theories that you’ll find on message boards and poker forums is the cash-out curse. This conspiracy theory presumes that a player who cashes out some of his money from an online poker site will experience a horrible losing streak when he returns to play. The theory figures that a “curse flag” will be placed on the poker player’s account, singling them out to be dealt bad beats.

What would be the motive for such a policy? Poker conspiracy theorists say that a poker room’s motivation for the cash-out curse is twofold: firstly, they’re trying to punish you for cashing out and discouraging you from cashing out in the future. Secondly, the card room hates it when players cash out and redistributing the money to other players allows the house to eventually receive the money through the rake. Although it may be possible to see the twisted logic in this sort of reasoning, the simple fact is that the online poker cash-out curse is not real.

Poker is a game of constant, volatile fluctuations - what we call variance. Typically, a player will cash out after experiencing a nice winning streak. The average casual player will have a few wins, look at their bankroll, and think “Hey! That’s enough cash for that new set of golf clubs I had my eye on.” When he returns to the play poker online, he returns with an inflated sense of his poker skills. He doesn’t feel like he can lose, and when he inevitably does, he cries about the cash-out curse.

The situation is worsened when an online poker player who has cashed out is over-confident and decides to move up in stakes, where more advanced poker players are waiting to take his or her money.

A “bad beat” typically occurs when you’re playing poker and receive a strong hand after the flop. Despite your seemingly monstrous hand, another player calls with a weak draw and beats you by getting a lucky card on the turn and/or river. Although this is actually a rather common occurrence due to the luck component of the game, it has led several naive poker players to cry conspiracy theory.

The theory is that poker sites are rigged to ensure that weak players don’t lose all of their money to better poker players too quickly. This is because a bad poker player who lasts longer will lose more of his money to the rake instead of to another player. The conspiracy theory postulates that bad poker players have their playing sessions extended by the online card room intentionally, at the cost of bad beats for stronger players.

The reality of the situation, of course, is that bad beats occur naturally. Firstly, online poker players, especially those at the micro limits, tend to be weak, passive, and loose with their chips. When the overall quality of the game is very loose, with players playing far more hands than they should, there are bound to be situations where a bad player sees lucky cards and beats a better player. Bad beats even occur deep in the main event of the World Series of Poker. In addition, online poker is played at a much faster pace than live poker. It would stand to reason, then, that you’ll see many more bad beats.

This is another theory that is based on the online card room trying to make more money from the rake. The theory states that the online poker site intentionally deals flops that help multiple hands in order to build up the pots, and therefore increase the rake that the card room receives.

This conspiracy theory is also explained by the loose nature of online poker, particularly at the lower limits. With so many players seeing the flop, there are bound to be instances where the flop helps multiple poker hands. Comparing live poker to online poker, pots will often be larger and more players will be eager to pursue weaker hands.

Again, it’s important to remember the random nature of the way in which cards are dealt.

The random number generator (RNG) is the backbone of any online poker room. An understanding of how they work will help dispel any of the conspiracy theories you’ve read so far in this article. The purpose of a random number generator is to ensure that there are no biases and that cards are distributed in an unpredictable fashion.

In many respects the online poker rooms go beyond what is actually necessary to create an unpredictable and random shuffle to provide a fair and unbiased playing environment. Using such methods also ensures a potential hacker cannot break or crack the random number generator.

Many of the conspiracy theories suggest that online poker rooms somehow fix their random number generators to produce certain results. The fact is that any attempt to create some kind of set of rules or decision engine into a random system would immediately invalidate the randomness – and a dysfunctional random number generator would be extremely easy to spot.

Also, let’s not forget that there are online poker players with hundreds of thousands of hand histories, saved in poker tracking software programs. These poker hand histories are regularly scrutinized by the poker playing community, and if there ever was some kind of “fix” by an online poker room, (that produced results that deviated beyond expected variance), it would be pounced upon immediately.

So, is Online Poker Rigged?

No, online poker is not rigged. The conspiracy theory presuming that online poker is in some way rigged is misconception that has been proliferated through poker forums and internet message boards. It’s human nature for a person who loses or has an unfortunate streak of poor luck to claim that the system was rigged, simply because it’s more difficult and uncomfortable to accept the fact that they were responsible for their own losses.

Players who continue to spout on about online poker being rigged (known as “rigtards”) are usually the same people who have a hard time accepting the fact that they might be a losing poker player. Instead of learning more about the game of poker and trying to improve their poker skills, they assume that system is working against them. It’s not! 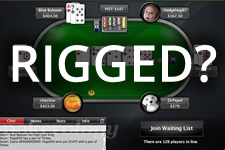 It's human nature for a person who loses or has an unfortunate streak of poor luck to claim that the system was rigged.