Get Invited Back to Home Games

I have found that, in general, the most profitable games are home games. There’s generally little or no rake, you’re competing generally against players with little skill, and the atmosphere is more conducive to fun than serious competition. For a skilled poker player, that’s a recipe for profit.

Some might think that with the spread of public poker rooms and internet poker, home games have disappeared. Fortunately, such is not the case. Even as for-profit poker venues have proliferated, home games continue to thrive.

(I’m not talking about “house games” by the way. These are for-profit games run as a business, sometimes located in someone’s house or office, and usually raked as high as or higher than the public poker room games. I tend to avoid these. I’m talking about the classic “friendly home game” among people who generally know each other).

Every serious poker player should add home game play to his repertoire of skills. If you can beat a home game, the last thing you want is to be turned away or not invited because of the way you behaved or played. But if you treat a “friendly home game” the way you treat a serious casino game, you may win money but you’re unlikely to be invited back.

Let me share with you a few pointers I’ve developed in my 36 years of home game play on how to fit in. They have helped me get invited back to games even when I was a consistent winner.

#1 Accept every invitation to a home game no matter how small the stakes are.

There is no reason to reject a game because it is too small for you. Use it to establish goodwill among players who may eventually know of or even play in a game that is more to your liking. It’s only one evening. No poker game is so much a waste of your time that you can’t afford a few hours of play even if the stakes are beneath you. Maybe they’ll introduce you to a new poker game that you will next encounter at a serious game, played for serious money. And maybe, over time, their game for low stakes will morph into a higher stakes game that is more worth your while. I now play in a game with a $1 ante and a $10 maximum bet. When I started, a couple of years ago, it was a $.25 ante game with a $2 maximum bet.

Similarly, be willing to accept an invitation to a game that may seem out of your league – but not hugely so. Home games frequently play smaller or larger than they seem from the simple structure. I was invited to a $5/10 blind pot limit $3,000 minimum buy-in game. That scared me a little until I found out that players only needed to put $500 on the table initially – and were free to leave if they were a loser at any time. I played quite tightly, figured out who the good and bad players were fairly quickly, and managed to win $3,200 over a couple of sessions. Had I just responded by instinct I never would have accepted the offer.

#2 Ask a few basic questions before you play, but don’t overdo it.

I find that the best approach when asked to go to a game is to appear interested and happy to be invited – as opposed to that of a serious poker player trying to decide whether he can make a big score. I generally start by just asking for the person inviting me to “tell me about the game”. They are generally enthusiastic about it and will tell me as much as I need to know, without my having to ask any further questions. Even so, just in case they don’t cover everything, make sure that you know the answers to the following questions:

There are many other questions that you might want to ask. But believe me, this is a long enough list. Make sure you ask the questions with a smile and a friendly tone – as if you’re chief concern is making sure that you fit in. You don’t want to come off as too serious or too knowledgeable. One question not to ask is “how good are the other players”. There’s no way to answer it; it appears as if you care too much about winning money; and you’ll find out when you arrive at the game anyway. If they’re sharks; they’re sharks and they know enough not to say so in advance. If they’re inexperienced and awful they probably don’t know any better and think they’re okay. It’s like asking someone who invites you to dinner how his wife cooks. Accept the invitation and decide on your own. And then keep your opinion to yourself!

#3 Arrive on time, stay until the end, bring something even if you’re told you don’t need to do so, and behave like a complete gentleman when you play.

You are not there to prove that you are a great poker player. If you win, folks may assume that you are very good. But why try to prove it? This is a mistake that many serious casino poker players often make when playing against rank amateurs. They seem to need to demonstrate their superior poker knowledge and experience. Do the opposite. No one needs to know how much you know about the game. If they ask you questions about the game –answer them as honestly and humbly as you can. But don’t try to look like an expert.

If they have rules that you don’t like, don’t argue about them or try to change them. They don’t like check-raising? So what. It’s not your mission to change their mind. If they ask your opinion, defer to them. “Whatever you guys like is fine with me” is the best answer to any question about local rules. If you find that you really like the game and end up playing in it for a long while and become a regular – then, and only then, can you start to candidly express your opinion on local rules like check-raising, what is the best hand in high-low, whether the dealer should ante for everyone, what games can be called, etc. But until then, go along with whatever they do – and do it with a smile.

Don’t leave early – at least not if you ever expect to play again. Most home games discuss invitations to the next game at the end of the night. You want to be there when that discussion takes place so you can volunteer that you’re free to play (that is if you want to play again). If you leave early, with whatever measly profit you may have made, you run the risk of pissing off everyone else in the game (home game players often don’t like winners to leave early) and not being invited back.

Bring something to the game even if you don’t have to. What does a six-pack of beer cost? How much is a bag of chips, a box of chocolate, or a jar of peanuts? It’s worth $10 or $20 to appear generous and friendly, even if the host provides the food in exchange for a $5, $10, or even $25 charge per player. Compared to playing in a casino that rakes 10% up to $4 or $5 a pot (that adds up to about $12 an hour per player and nearly $100 for a typical 8 hour playing session) a home game is a steal.

#4 Don’t enforce any rules in the game – especially if no one else says anything about them.

I had a friend who was playing for the first time in a home game he had just been invited to. These were a bunch of easy-going, loose-passive guys who liked to get high and drink while they played. There wasn’t a serious player among them. They’d had this game going for thirty years or so. Halfway through the night, one of these players raised with two motions – calling the bet with one motion and then reaching back to his stack and putting more money in for the raise. My friend, sitting to his left, told him that this was a string raise and was prohibited. This began a discussion that turned into an argument – since this player and most of the other players had no idea what a string raise was. My friend was officially banned from this game – a game he almost surely would have consistently beaten.

Don’t do what he did. Every home game has its own set of rules. Respect them – even to the point of conceding a pot because of them. “I was playing poker at a Knights of Columbus Hall in Boston. We were playing 7-card stud – a game I wrote a book about. I bet and he called on the river. I had trips. He had garbage – no pair even. I reached for the $60 pot in this $1-4 game. He said, “Hey, you don’t win. I have a skeet”. Sure enough, in this place they had a local rule that a hand with a 2, 7, and 9 with no pair and two cards between a 2 and a 9 beat trips and lost to a straight. I laughed, apologized for not knowing the local rules, and moved on to the next hand. Though I graciously lost this large pot, I ended up winning over $100 for the night, and got invited back every week.

#5 Be friendly and interested in the other players and their stories. Don’t rush the action. But don’t you slow the game.

People like to play with players they like – even if they lose to them. The key to being likable is to listen a lot and talk little. If the other players are interested in your tales of poker stardom, they’ll ask. If not, don’t volunteer anything. No one ever pissed anyone off by not starting a conversation. But many have been pissed off by an unintentional remark or by someone who talks too much, slowing the game and potentially distracting other players. Similarly, no one minds being listened to. Since you’re new, they might well tell you all the stories that everyone else is tired of hearing. Don’t disappoint them. But while you’re listening make sure to keep track of the action. Few things bother players more than someone who can’t keep the game going.

To sum it all up, be considerate to a fault, listen rather than talk, be humble, and above all else be respectful of the rules and customs of your host. All in all, getting invited back to a poker game is not about the money but just like being a good guest – something you strive to be anyway, right!

One Response to “Get Invited Back to Home Games” 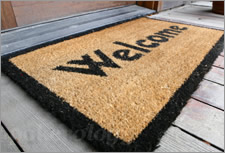 Every home game has its own set of rules. Respect them – even to the point of conceding a pot because of them.