The Care & Maintenance of the Home Game

Home or private poker games are played all over the globe on a regular basis. Old ones disband and die and new ones crop up all the time. The real successful ones endure year after year and some of the players in them have been active members for decades. How do these long term weekly or monthly games continue uninterrupted for so many years? Through care, maintenance and nurturing from the core players. Let’s examine some of the do’s and don’ts and a few innovative ideas to keep or increase the interest in a poker home game and to possibly attract new players. New players are, after all, the life blood of enduring private poker games.

Home or private games come in all sizes, shapes and purities. There are groups of purists that insist upon playing just one game such as no-limit hold’em or pot limit Omaha. Then there are groups that prefer limit, dealer’s choice – but no wild cards or funny games. The third group seems to love a new adventure on every deal and is captivated by the hybrid poker games that truly define the home game. We have a section here at Pokerology.com under poker school sub categories entitled ‘other poker variations’ that explains several of these hybrid games. Definitely worth a read if you are interested in the title of this article. OK – let’s get to it!

Unless a private/home game has a core group of dedicated poker players that are just never going to leave, which is unusual, each member should take on the responsibility of recruiting new players to assure that the game will endure. Long term home games get tougher and tougher over the years as they become the survival of the fittest. I played in one home game for fifteen years before I moved from the area and the makeup of the players around the table had changed drastically over that period of time.

Weaker players who lose on a regular basis ultimately stop playing either because their poker bankrolls or egos just cannot stand the pain any longer. In a normal home game with the same regular players maybe two players are constant long term winners, the bulk of the group plays break even poker – winning and losing, and then there are the two or maybe three players that “give the party” and are overall losers. These are the players that have the financial resources to withstand the constant losing coupled with the psychological make up which permits them to bear the repeated bruising of their egos. If these regular losers do not have both the financial resources and the psychological make up, they will ultimately drop out and find other activities which are either less financially demanding or less ego bruising. These players need to be replaced, hopefully with weak, financially secure and egoless recruits. This view of how a home game endures and becomes fertile ground for the more skilled players may seem rather cynical since most home games are played with friends. Maybe this view is cynical but it is realistic. If there wasn’t such a thing as an ego and you were playing for matchsticks instead of the coin of the realm – well, then it wouldn’t matter. But you know it does matter so start being a little cynical!

One way to keep interest high and also use as a recruiting tool, is to offer promotions. Casinos use this tool so why not adopt it to your home game? The game I played in for fifteen years at one time or another employed a high hand jackpot, a bad beat jackpot, and a showdown free roll as the last hand of the night. We also ran tournaments on a regular basis. These tournaments were a great way to introduce new players to the extended family of regulars and get them started with a fixed downside – their tournament buy-in. Of course the fixed downside only applied if they elected not to jump into one of the inevitable cash games that would begin as players busted out of the tournament and decided they hadn’t really had their full dosage of poker for the day.

Let’s spend some time exploring how to fund the promotions which I’ve mentioned. Most of the players in my home game were quite familiar with casino play and were used to a rake or time charge. If you rake a fraction of the normal casino charge and make sure it gets back into the player’s hands on a regular basis, it can become an attraction. As I explain how my group’s high hand jackpot worked, understand you can substitute any amounts to the formula to increase or decrease the level of stakes to which your group is accustomed. We used to demand a $200 dollar buy-in and before each game required each player to post $5. We normally seated eight players which amounted to $40 which was saved over five games equaling $200. The player with the highest hand in those five games won the $200 which amounted to a free buy-in – a nice incentive to keep coming back, especially if you had a high hand in the running. Notice that this little enticement was funded by the posting of $5.00 before play even began so it did not come out of a rake.

The second of the promotions my group used was a bad beat jackpot. First the group needs to decide what the criteria of the bad beat will be. When we first started ours, the rule was quads needed to be cracked by a better hand. Our thinking was that we played many games with common cards so we needed to make the criteria high. In retrospect we realized we made it too high and reduced it all the way down to Jacks full to make the payoffs more frequent. Yes, the higher the criteria the higher the payoff is but it will sometimes take too long for it to occur and you want that money back in the playing realm. We used to take about a twenty minute break during the evening to eat and chat about, believe it or not, non poker subjects. When we returned to the table we cut the next four pots $5.00 each and put that $20.00 into the bad beat fund. In this way, the cut and funding of the jackpot is quick and painless. We capped each of these funds at $200 which was our buy-in. At $200 we just started another jackpot knowing if somehow we found ourselves too far ahead, we would be able to figure out another mutually agreed upon promotion to get the money back into our player’s hands.

The third promotion we used was the showdown hand after the game had concluded. Originally each player tossed up another $10 putting $80 in the center and a hand of five exposed cards was dealt to each player – high hand took the $80. Seven to one odds to walk off with eighty dollars which would either pad your win or take some of the sting out of your loss was our collective thought process. We then came up with what we thought was a better idea. All these promotion ideas can be tailored to meet your own group’s needs and desires. Our improved showdown format required cutting each pot of the night $2 until we reached an agreed upon $150. This process took about five hours at an estimated fifteen hands per hour. Fifteen hands an hour might seem slow but we played a couple of hybrid poker games wherein you had the opportunity to exchange cards and other oddities that slowed things down. With our cutting the pot format, everyone got to save their additional ten dollars and the showdown pot was almost doubled. The reality was that the looser players funded the jackpot and the tighter players almost had a free roll. Hey, it worked for me.

I hope one of these suggestions concerning player recruitment or promotions can add a bit of excitement to your home game. The group I played with certainly enjoyed them. New players that are just joining your poker game and are uncertain of the caliber of play seem to like the idea of being able to win a few hundred dollars where everyone has an equal chance. Of course, if they are lucky enough to win one of these promotions, it has been my experience the regular sharks of the game seem to wind up with their new found wealth in their stacks. Many times the new comers attribute the winning of the promotion to good luck and the losing of it in the game as bad luck. At least they are half right – one out of two ain’t bad! 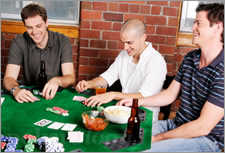 One way to keep interest high and also use as a recruiting tool, is to offer promotions.