Hi, poker players. I’m Lou Krieger and this is my first article for Pokerology.

For those of you who don’t know me, I’m the author of 11 books about poker, and you can find out more about them at my web site; LouKrieger.com. Each book has a fairly detailed description of the contents, so it’s easy to tell if any given book is right for your interest or level of development as a poker player.

I’m also the editor of Poker Player Newspaper, which is distributed at more than 400 card rooms and casinos in the United States.

Finally, I host a weekly internet radio show at RoundersRadio.com. The show, entitled Keep Flopping Aces, airs every Thursday at 9 p.m. Eastern Time (6 p.m. Pacific Time) and corresponding times world-wide. It can also be heard as a rerun the following day, and is available for on-demand listening shortly thereafter. The usual format is a guest from the world of poker, and an hour spent in conversation, with listeners calling in with questions for my guest or for me during the hour-long show.

We’re right in the heart of the holiday season, and holiday demands in the midst of a global recession can put a strain in every budget. If you’re running bad right now, strapped for cash for any of a thousand reasons, here are some poker tips to make it through the holiday season.

Drop Down and Play for Smaller Stakes

When they’re losing, so many players follow their first urge and jump up in limits in an effort to recoup their losses as quickly as possible. That’s nice when it works, but it’s usually a recipe for failure, even bigger losses, and occasionally a completely blown bankroll.

Poker is a game of variance and heavy fluctuations, and regardless of how well you play, or how big an edge you might have over your opponents, it’s not a game where any individual has total control of the outcome. Even if you think you do, there’s always the nasty little fact that random cards can turn a weak hand into a winner, and snatch that pot you think you’re going to win right out from under your nose and all you can do is watch those chips stack up in your opponent’s pile.

When you’re short-stacked, when you’re running badly, the best thing to do is drop down in stakes so that you are well-funded for the game you are playing and can afford the inevitable streaks that are sure to come.

Even the top poker players do this. In fact, some of the guys who regularly play online poker at the “nosebleed” stakes games on Full Tilt, like Tom “durrrr” Dwan and Isildur1—who have each lost $4 million or more in the past few months—have dropped down in stakes in order to rebuild their bankrolls so that they can come back up to the higher stakes and play against Phil Ivey, Brian Townsend, and others who regularly win and lose more in a typical month than many players win or lose in a lifetime.

Make Resolutions, But Make Sure They’re the Right Ones

There’s no sense in resolving to accomplish things you have limited, little, or no control over, because whether or not you reach these goals is not entirely a product of your effort, resolve, or will. So promising yourself that you’ll win the World Series of Poker, or even a small poker tournament at your own local casino, isn’t within your wherewithal to achieve. But promising that you’re going to study poker three hours a week, work on improving your game by reading new poker books and availing yourself of whatever it takes to improve, such as taking lessons or joining a poker discussion group is achievable and it’s something every serious player ought to do.

Resolutions, to be effective, have to be achievable and within your span of control, and you need to make sure that they are realistic. And they’re only realistic if they are both measurable and set within a time period that makes good common sense.

So goals of spending four hours per week studying poker, reading two or three new poker books per month, and forcing yourself to get up from the table whenever you feel that old tilt urge coming on fit these criteria. A goal of winning the World Series of Poker, which is a nice dream, is not within your control, nor is it something that can be accomplished within a given period of time. And while it will happen for someone next year, that someone is not likely to be you, and just because you’d really like it to happen, doesn’t mean it will.

If you plan on growing as a poker player, you will need to get up and get yourself out of your comfort zone on occasion. While it’s nice to play in a regular game against familiar opposition—maybe you’re even the big, long-term winner against your poker cronies—if you plan on moving up the poker ladder, you’ll need to test yourself on occasion to see if you still have the right stuff when the competition gets tougher.

If you’re happy to be a regular, long-term winner at your usual limits, you need not do any more than stay the course, and as long as your opposition doesn’t improve, dry up and blow away, or otherwise change while you’re least expecting it, you’ll do fine. But if you want to promote yourself up to the higher stakes, you’ll have to try yourself in those games against the regular opponents you can expect to find there.

Maybe you’re good enough to beat the $2-$5 no-limit game as well as $1-$2 game, or perhaps you’ll find that the guys in the $5-$10 no-limit game are no more skillful than those in your regular $2-$5 no-limit lineup. If that’s the case, you’ll find that you’re able to win more money in bigger game than those you’re playing now, simply because you were willing to step outside your own comfort zone—for however long a trial period you gave yourself—found that you had the mettle you hoped for, and were able to permanently give yourself that poker promotion that you had heretofore only dreamed of.

That’s what growth is all about, and if you think you can do it, you owe it to yourself to test your skills, assess your results against a newer, tougher level of opposition, and move up as long as you can beat the new game for more money than you were beating the old one.

The New Year is the time for resolutions. So make a few, and while you’re at it, make yourself a little bit uncomfortable by trying a bigger game if you think you have the right stuff. You might be glad you did.

One Response to “Happy Holidays and Poker Resolutions” 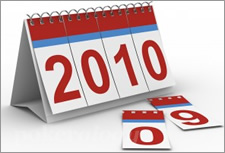 Resolutions, to be effective, have to be achievable and within your span of control.