Whether a particular poker hand is a good beat or a bad beat is really just a matter of position or more to the point, which end of it you happen to be on. I have sworn an oath, taken by many serious poker players, which forbids us from becoming insufferable by telling bad beat stories. I have, however, found a loop hole in the oath – it says nothing about sharing a good beat story! Since I was on the good side of the following story I don’t believe I would be violating my sworn duty, but I’ll let you be the judge.

I sat down in a no-limit online cash game in late position and posted. I looked at my hand of 7-2 offsuit and immediately lamented that my post was a waste of money. Three players limped in before the action got to me and, of course, I checked. The button limped, the small blind completed the bet and the big blind checked. Wow, seven limpers – maybe their raise buttons were out of order! I remember thinking that I may have wandered into weak/passive poker heaven.

The flop was delivered and glory days it was 7-2-2 of three different suits. I chuckled to myself having caught the “Big Blind Special” but caught it in the cutoff seat. I now had five players in front of me and only one behind, the player on the button. The first five players checked and I decided to give the button the opportunity to flex his muscles. I was not disappointed as he, sensing an entire table of weakness, fired out a bet of half the pot. Amazingly, three of the five limpers called and I decided to just call as well. Incredibly, the case deuce made its appearance on the turn. I now had three players in front of me and one behind as I sat there giggling holding quad deuces.

Three checks to me and I added a fourth and the button checked as well. Hmmm, I mused as I did want to get some more money in the pot but thought, “There’s always the river.” I began to implore the Poker Gods to drop a “Wheel House” card on the river and they must have heard me as a nice, big, beautiful Ace was delivered. The first player bet half the pot, the next player folded and yes, there really is a Poker God because the next player moved all-in and had me covered. I let my avatar blink for a while to indicate a tough decision, and then made the call. The button folded and the initial raiser called. They both held an ace and apparently did not smell the case deuce lurking. My first hand in the game, holding a 7-2 off suit, and I dragged a huge pot. God, I love poker!

Now the fireworks ensue as the loser is beside himself that I won the hand holding a 7-2. Obviously not remembering that I had posted and was permitted to see the flop for free, he types into the chat box, “how the f*** could u call with that garbage u donk”? I can’t help myself and type back a reply of “gosh, I thought they were suited”. This, of course, drives him across the tilt line and a diatribe ensues, that if reported, would result in his chat privileges being revoked.  Meanwhile, I’m sitting there giggling like a little school girl. I normally do not respond to the clueless rants of these cretins as I feel they should be left to stew in their own juices.

This was a fun, lucky, good beat hand but is there some lesson we can take away from this story as we travel down the road toward poker excellence? I think there may be a few. First and foremost, always remain observant, paying attention at all times. This was something my tilty opponent certainly was not doing since he felt that I entered the pot voluntarily instead of posting. Being aware of newcomers that are required to post is important as it results in dead money which may help make a close decision easier for you. Unlike Mr. Tilty, realize that a poster is essentially another blind and could be holding just about anything if not forced to make a decision based upon someone raising.

Always remaining alert and observant will glean for you which other players are also paying attention and therefore are more formidable foes. Lastly, I believe there is a lesson to learn about emotional control and remaining stoic in the face of adversity. The victim of my lowly 7-2 went on to lose several more buy-ins which I believe were directly attributed to his loss of emotional control. Good beats and bad beats are both part of poker – just don’t ever let me catch you telling a bad beat story! Especially if you’ve taken the oath. 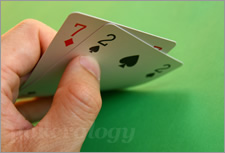 My first hand in the game, holding a 7-2 off suit, and I dragged a huge pot. God, I love poker!