What could be more fun than scamming friends out of a few coins of the realm by outsmarting them with some proposition bets concerning fifty-two pasteboards? You might consider this a little sneaky and cynical but if you feel really bad after taking their money, you can always give it back or pick up the bar tab. I’ll leave that decision up to you but I’d like to share a few card proposition bets you can offer your friends. These propositions appear, on the surface, to be offering your friends the edge. That, of course, is not true and is the essence of a proposition bet.

As the name implies, you will need two standard decks of playing cards that will be shuffled and placed next to one another. In fact, let your mark … er, I mean friend, do the shuffling so he will know this is on the square. Tell your friend (or soon to be ex-friend) that you will turn over a card from each deck at the same time and offer to bet even money that at some point the exact same card of suit and rank will appear at the same time. If, as an example, two deuce of clubs appear on the same turn, you will win and if there is no match after all fifty two cards are turned, then your friend wins.

Intuitively, most people will believe that it is highly unlikely that two identical cards would occupy the same position in two randomly shuffled decks. They would further believe that you would need some odds in order to win hence even money sounds like a good deal. Actually, you have way the best of it at about a 26 percent edge. Casinos would love to have customers willing to play against that type of edge.

Many unsuspecting poker players believe this offer sounds like a pretty good deal. Have your friend shuffle a deck of cards and then fan them out face up so you can both see all the cards. Now offer to play him a hand of five card draw poker in which you both will draw five cards initially and then replace as many cards as you like. Since the deck is face up, you will both see what the other draws and here is the real hook… tell him he will win even if he just ties your hand (suits do not have any rank) and you will allow him to go after you so he can see what you’ve drawn.

The part of the prop of allowing him to win, even if he only ties you normally hooks them. Since you’re allowing him to go after you and suits have no rank, he will reason that the best hand you can make is a Royal flush and he can just make a Royal flush in a different suit, tie you and win the wager! Once he accepts this wager, you proceed to draw five cards allowing, as offered, your friend to see what you draw and react accordingly. This prop is a sure fire winner… you can’t lose if you use the following strategy.

Draw all four tens and any other card. Having done this, your opponent will either draw four Jacks, Queens, Kings, Aces or a straight flush. Notice that the highest straight flush he can draw is to the nine, as you have taken all four of the tens. At this point, he will have you beat and possibly be feeling smug. The smug feeling will be short lived, I can assure you.

Allowing your friend to go second seems to pave the way for him to either beat you or at least tie you while, in actuality, sealing his fate. Your more astute buddies may figure this out before stepping into the trap but many just can’t get away from what seems like such a good deal.

Here is another proposition bet that will get action from friends that enjoy a gamble. Offer a friend to inspect and then shuffle up a standard deck of playing cards. Now ask that he separate it into three piles and offer a wager of even money that at least one of the three cards he cuts to is a paint card… either a Jack, Queen or King. The normal reaction from friends that know their way around a deck of cards is for them to begin to attempt to calculate the odds. You can just about hear the gears grinding as they reason that there are a total of twelve paint cards which is less than a quarter of the total deck which would equate to one in four. Since you are offering only three tries to get at least one paint card, the odds would be against you so even money seems like a good deal.

Remember this… if it seems to be too good to be true, it usually is! That would describe this proposition as well. While this one isn’t a lock like the last one, you do have an edge of exactly 5-to-4 in your favor. While you won’t win this one every time, in the long run you’ll be on the plus side of it.

This one is good for a chuckle and I wouldn’t try it with someone who does not have a sense of humor. Once again, you have a friend shuffle up a deck and place it on the bar. Tell him you will alternate turning over cards and you will bet him that he will turn over a paint card before you. Offer to go first so you could have the first opportunity to lose. Once he agrees you both take turns lifting a card off the deck and placing it face up on the bar.

The trick to this prop is that each time you take a card off the deck you lift it high enough to determine if it is a picture card or not before turning it over. If your friend turns over a paint card first, fine you win and collect your money. If, however, you get a picture card, don’t turn it over but place it face down on the side and pick another card which, if it isn’t a paint, you can turn over. Almost 100 percent of the time your friend will say, “Hey” and will reach down and turn over the card you placed on the side face down. You can then say, “See, I told you I would not turn over a paint card first.” Remember I prefaced this prop with the advice to pick your victim carefully!

While some of these props are locks in your favor, others have an element of chance so they are not sure fire winners each and every time. However, the odds are in your favor so think of yourself as the casino operator who depends upon volume to make sure he wins. If you use these props often enough, you will be assured a profit. You should always allow your friend to shuffle or, even better, to supply his own cards so you do not fall under suspicion of using a set up deck. If they’re going to lose, let them know they received a fair shake. Good luck in amassing a profit and possibly losing a few friends! Better yet, have fun and pick up the bar tab… that way everyone wins! 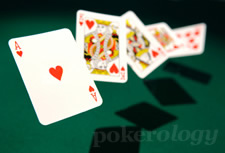 Your more astute buddies may figure this out before stepping into the trap but many just can’t get away from what seems like such a good deal.