The Front-Loaded Nature of Texas Hold’em

Unlike many other forms of poker, Texas hold’em is a front-loaded game. That front-loaded structure has a significant impact on playing strategy, although this is a subject that many players don’t spend a lot of time thinking about. Most of the time hold’em hands are formed on the flop, because five of the cards that can be used to make the best poker hand from the seven cards that will available to you are in play at that point.

You get to see five-sevenths, or seventy-one percent of your hand on the flop, and that’s a real bargain compared to any other form of poker. The cost to see 70 percent of your hand is only one round of betting. But there’s another side to this too, and the flip side is that there are three remaining betting rounds but only two additional cards that can be used to complete your hand.

The implications of front-loaded hand development compared with back-loaded costs cannot be ignored when planning how to play a hand, or often more importantly, whether to continue to play after the flop is revealed. Because seven-tenths of your hand is formed by the time you see the flop for the bargain price of only one round of betting, the remainder of the hand becomes quite expensive by comparison.

One obvious consequence of this unbalanced relationship between cost and cards is that players should consider abandoning their quest for the pot unless dealt a big hand that can survive the flop without any help, or the flop helps that player by pairing one or both of his big cards, or offers a straight or a flush draw.

The obvious strategic implication that one can take from all of this is to release hands that cannot survive the flop on their own and are not helped by the flop, unless other compelling reasons to keep playing are apparent. If you aren’t dealt much of a hand but suspect that a bet or raise on the flop or turn will cause your opponent to release his hand, then of course you’d want to keep playing. But absent any poker tells a player might have on his opponent, it’s a case of “fit or fold” on the flop.

The relationship between the cost of the flop and the fact that you will receive five-sevenths of your hand for that price, especially when compared against the high cost of paying for the remaining twenty-nine percent of your hand, makes hold’em the front loaded game that it is.

Weak players have always exhibited an unwillingness to release hands on the flop. They stick around on nothing stronger than hope, which never makes investing in weak hands worthwhile in the long run. Drawing a card is not a bad strategic decision in and of itself; the bad decision is drawing a card at a price that’s won’t be offset by the reward if you get lucky.

The odds against improving your hand when you go from the flop to the turn and the turn to the river generally make buying another card a poor decision. The exception, of course, is when you’ve been dealt a flush draw or a straight draw along with enough opponents to ensure that that the size of the pot you’re hoping to win more than offsets the odds against completing your hand. That’s what implied odds are all about, and what generally determines whether draws are playable or unplayable hands.

The relationship between the size of the pot and the odds against completing your hand exists aside and apart from the front-loaded nature of hold’em. It is always present regardless of the form of poker you’re playing. But the fact that you get to see the majority of your cards early, and for a bargain price too, make the decision to fold or continue on after you’ve seen the flop one of critical importance.

While this concept is important in fixed-limit hold’em, it’s much more critical in pot-limit and no-limit hold’em games. In those games, especially when players are deep- stacked, decisions on the flop are critical. Because big-bet poker is usually a game of implied odds, if you can catch a big hand inexpensively on the flop, you’ve positioned yourself to win each and every one of your opponent’s chips if he’s willing to play with you.

But he has a chance of taking all your chips too, which makes big-bet poker more of a trapping, cat-and-mouse game than fixed-limit poker, where you are really pressing small edges by betting and raising as often as possible whenever you figure to have the best of it.

But when you can see the vast majority of your hand for an inexpensive price, and your opponent flops a good hand while you flop a great one, you can take his entire stack in one, sweet, front-loaded stroke.

The implications of Texas hold’em’s front-loaded nature become more apparent as you think about it. But the most important one is what we’ve discussed here: It’s often costly, and unprofitable on a long-term basis, to play beyond the flop. The simple truth is that the best hold’em hand on the flop is generally the best hand on the river. Because of that, you’ll save lots of money when you release what might have looked like promising holdings but are now long-shots at best, once the majority of your hand has been revealed on the flop.

6 Responses to “The Front-Loaded Nature of Texas Hold’em” 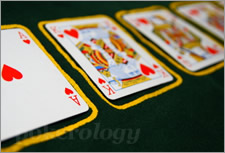 You get to see five-sevenths, or seventy-one percent of your hand on the flop, and that’s a real bargain compared to any other form of poker.