Hold’em strategies continue to evolve and catch the fancy of some players and are dismissed by others. One such strategy is “Floating” which means calling with a weak hand in position with the express intention of pushing your opponent off his hand on a subsequent street. It is certainly not new… I honestly do not know who coined the term float but the strategy has been around since they invented the game, but then someone put a name on it and once poker popularity exploded due to “The Moneymaker Syndrome” it became a sexy move in some quarters. Sexy is cool but there are downsides to this little piece of “Fancy Play Syndrome”. That would be the “Sinking” part of this article’s title.

Today let’s examine the upsides and downsides of this popular poker strategy. The float is based upon the knowledge that most pre-flop hands do not improve on the flop and, therefore, you should be able to take advantage of your opponent not improving even when you have nothing, since you have position. The key ingredient of the strategy is your belief that your opponent has a weak holding or a weak constitution. If he has a hand and is trapping, this can be a very expensive mistake. The backbone of this play relies on your hand and opponent reading skills. I think this play has lost a lot of its shine as its popularity has soared and has been overused and abused. It is beginning to achieve the same status as the button raise and we all know how much credibility goes with the majority of button raises.

How can we put some teeth back into this solid poker strategy? First and foremost, do not use it indiscriminately but choose your situations wisely. Let’s take a look at the key elements of successfully floating an opponent and counter strategies to use against it.

Your opponent must be properly assessed as weak for this to be a viable play. While weak is relative you must believe he does not have the heart to call a significant bet or raise. Aside from knowing your competition, the texture of the board is a critical dimension in assessing the probability that your opponent is weak. Also, try not to put your opponent on a single hand and become too rigid to move off that assessment. Many a stack has been lost attempting to float an opponent who… Just must have A-K, only to find out he was holding a quality pair. Very often A-K and big pairs are played in a very similar fashion.

Aggressive players who like to bully the table and stake out their dominance are my favorite targets to float. I base that on the belief that if they are jumping in or raising an inordinateamount of the time, they very well may be getting out of line and playing marginal hands. If you believe another player is very tight and he raises from under the gun, why would you ever try a float against him when, in all likelihood, he has the goods? As I am fond of saying… give such an opponent credit not your chips. You’ll find it to be a lot cheaper in the long run.

As with all of poker, to become predictable is to become a losing player, especially against all but the weakest, non observant opponents. I would liken floating to bluffing in terms of the proper frequency of use. Either of these two poker strategies can be very successful when used at an appropriate time, in the correct situation against the proper opponent. When either of them is overused your competition catches on and you, in essence, paint a bull’s-eye on your forehead. When that happens the stack you had hoped to acquire becomes larger with the addition of your chips.

As in any counter strategy, you first need to identify who may be getting out of line with this ploy. You can drop back when holding a strong hand and become seemingly passive by betting out and then calling and check/calling the turn and the river. There are some risks inherent with this counter poker strategy in allowing the floater to overtake you but I believe most floaters don’t have much with which to overtake you anyway. At the showdown, they realize they have been cooked in their own juices.

If you’re not fortunate enough to be holding a solid hand but believe a float is in play, then you can bet the flop and check raise the turn. This ploy also has some risk as the target could actually have a real hand if you misdiagnosed his actions. All of poker is risk/reward related so you need to believe your opponent is on a float for this to work. Unfortunately, we all know there are no money back guarantees so have some solid reasoning behind your decision.

The float play has always been around even before we had this fancy name for it. I’m sure Johnny Moss used it and just thought of it as stealin’ those dumb country boy’s chips. Floating should be part of everyone’s no-limit arsenal but used with the same discretion as bluffing and blind stealing. If used judiciously, it becomes a major positive to your game. If overused or not well thought out, it can become a major leak. Sparingly used, it can be a real moneymaker… overused it can be a real chip burner!

May the flop be with you! 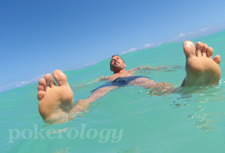 There are no money back guarantees so have some solid reasoning behind your decision.