Everyone talks about implied odds as though it’s some sort of ubersophisticated poker concept that only poker’s in-group is aware of, but in truth it’s a simple idea to understand and just as easy to use in any game you play, regardless of whether that game is live or online, a tournament or a cash game.

The skill lies not in understanding the concept, but in accurately assessing the chance that your opponent will act in a predictable manner. In short, a significant part of using the concept of implied odds effectively is your ability to assess a situation in advance and predict the outcome. In short, it’s a guessing game of sorts, and if you have good intuition, you’ll do OK.

Whenever all the cards have been dealt and you’re the last player to act, if your chances of winning are greater than the odds the pot offers you, it pays to call. Otherwise folding makes more sense. If you figure to win once in three times when the pot offers 5-to-1 odds, calling pays regardless of whether you win this particular hand or not. It’s the long run that matters in poker, not the outcome of any given hand. If you were to invest a dollar three times, lose twice, but win five dollars on that one-time-in-three that you figure to have the winning hand, you’ll be ahead three dollars—or one dollar per hand played in this situation—in the long run.

But on earlier betting rounds, when there are still more cards to be dealt, more players to act, and more betting rounds, it’s difficult to know precisely how much it will cost to try and make your hand since you can never be sure how the betting will proceed or how many opponents will stick around and pay you off if you make the winning hand. In one situation, you might have a draw to a hand that will be the nut flush if you make it and it will only cost one bet to see the next card and four loose opponents will be calling along with you. The price to draw is inexpensive, and the payoff looks good if you get lucky.

But in another situation, when you also have a draw to the nut flush, there’s only one highly selective, very aggressive opponent – so the payoff doesn’t look so good—and he’s just wagered enough money so that the pot is only offering you a bit better than even money to make the call. Since the mathematical odds against completing your flush are not nearly even money, the payoff doesn’t overcome your cost of doing business, so you’re better off folding.

Here’s how implied odds come into play. They are the ratio of what you should win – including money likely to be bet in subsequent rounds – to the cost of a current bet. Implied odds are nothing more than an estimate – an educated guess, if you like – since it’s hard to know for sure how many opponents plan to stick around or how much money will be wagered on future betting rounds.

Implied odds are always better when your hand is hidden. That’s because opponents might not realize what you have and they’ll pay you off with lesser hands. That’s why a straight that’s filled with at least one inside card in your hand can be more valuable than a flush. With three suited cards on board, the possibility of a flush is obvious to everyone; but a hidden straight is not as easily recognized and can generate a bigger payoff for the holder. That’s also why a set – a pair in your hand matching one of that rank among the community cards – is usually more profitable than a pair on the board that matches a third card of that rank in your hand.

Betting structures affect implied odds too. Pot-limit and no-limit games, with their potential for huge wagers, offer greater implied odds more than a fixed-limit game, where the size of a wager on any given betting round is immutable.

Your opponents’ playing styles can also increase or reduce implied odds. Players who call but seldom bet or raise increase the implied odds you receive, because you can draw inexpensively against them, knowing all the while you’ll get paid off if you make your hand.

The amount of money already in the pot is another reason you might want to continue playing a hand even when you’re not the favorite. If you flop a four-flush, the odds are 1.86-to-1 against completing your hand. You might even make your flush and still lose. Even though you are not favored to win the hand, you are still a money favorite. In other words, even if you only win just once every three times you find yourself in that situation, it pays to draw as long as the pot promises to return two dollars or more for each dollar you have to pay to draw to your flush.

While there are always caveats that might cause you to deviate from these suggestions, here are three rules of thumb to think about when you’re considering the pot odds/implied odds relationship.

When Oscar Wilde wrote, “The truth is rarely pure, and never simple,” he wasn’t thinking about a poker game, but his words are true nonetheless. While these three rules of thumb are not the entire answer, and although it’s easy to come up with reasons to deviate from them on occasion, the fact remains that the relationship between pot odds, implied odds, the odds against making your hand, and money that’s already in the pot will go a long way toward answering that age-old poker dilemma: “Shall I fold, bet, call, or raise?”

One Response to “Figuring Implied Odds” 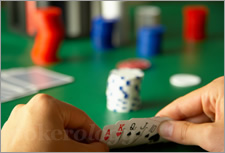 If you have neither pot odds, nor implied odds, and are not a money favorite, fold and save your money.